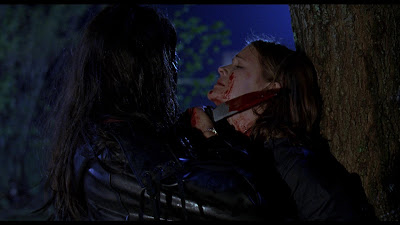 You know the basic horror movie tropes. One of the basic tropes is that for all of their blood and guts, horror movies are incredibly conservative in terms of sexual politics. Anyone who has sex dies. Cherry Falls turns that basic trope on its head. In this film, the opposite is true. Our killer is targeting virgins. It’s a hell of a fun spin on one of the basic rules of slasher movies. In a sense, it’s a bit like Scream in that respect, although it lacks the overall cleverness of Craven’s franchise.

Aside from that change, though, Cherry Falls follows the basic horror movie story. A young couple gets killed, sending shockwaves through the small town of Cherry Falls, Virginia. Meanwhile, life in the high school seems to go on as normal. Jody Marken (Brittany Murphy), daughter of the local sheriff (Michael Biehn) breaks up with her boyfriend Kenny (Gabriel Mann) and mourns the loss of a couple of fellow students. Of course, the killings aren’t going to stop there. Another student is killed brutally, and the police let slip that all of the victims have had the word “virgin” carved into them.

Sheriff Marken calls a meeting of all the local high school parents to tell them what he has discovered. Jody eavesdrops on the meeting along with her friend Timmy (Keram Malicki-Sanchez), who gets the scoop that the killer is specifically targeting virgins. Timmy (Timmah!) borrows Jody’s phone to call his friend at the high school paper about what he’s learned and runs out of the room. Now, since this is a horror movie, it doesn’t come as a surprise that when Jody goes to find Timmy (Timmah!) and her phone, she finds him dead and stuffed in a locker with “virgin” scratched into the door. And it also doesn’t come as a shock when Jody is attacked by the killer, but manages to escape, and then when her father runs to investigate, the killer has scampered off as well.

Jody describes the attacker to the police sketch artist and it turns out that the person she has described is someone who lived in the town 25 years earlier. Lora Lee Sherman mysteriously vanished in her senior year of high school after claiming that she was raped by a group of four kids from the football team. And again, since this is a horror movie, it comes as no shock when Jody drags this information out of her drunk mother (Candy Clark) that two of the alleged perpetrators are the school’s current principal (Joe Inscoe) and, of course, Sheriff Marken.

Cherry Falls never received an American release, and that’s kind of interesting considering the cast. In addition to those already mentioned, Jay Mohr plays a teacher at the high school who has more than a little sexual tension with Jody, and Amanda Anka, honestly probably best known for being married to Jason Bateman, plays the deputy. Regardless, this seems like a film that might have done a little business in the States, at least enough to bring back its modest budget.

Cherry Falls is a film of contradictions in many ways. It specifically subverts one of the main tropes of slasher movies, but then follows every other horror movie trope to the letter to the point where I could just about identify jump scares to the second. It’s entirely focused on sex—even the name is an obvious double entendre—and yet is remarkably prudish about including sex in its running time.

In the long run, it’s a little disappointing. It could have very easily been a clever spin on slasher movies much in the line of Scream while taking a very different approach. Instead, it’s just got that one difference. Even the ultimate motivation of the killer is directly out of the cheap psychology textbook that so many slashers seem to reference. This is a film that I think had a great deal of ambition and simply didn’t have the wisdom, the intelligence, or the cojones to actually be that different.

It’s worth a watch if you like the genre, but it’s not going to replace any of your favorites.

Why to watch Cherry Falls: Hell of a spin on the typical horror movie trope.
Why not to watch: Despite the different spin, it falls into a lot of the same tropes.

Posted by SJHoneywell at 9:38 PM