Films: The Big Short
Format: Streaming video from NetFlix on The Nook. 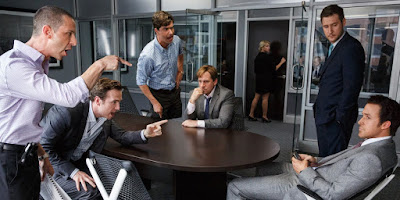 People say that money is the root of all evil, but that’s not what the actual quote says. The actual quote says that the love of money is the root of all evil. I came of age in the greed-happy Reagan years, so it’s not like these are sentiments that I don’t understand. But, even as those heady years of hostile takeovers went away, the underlying desire for greenbacks certainly didn’t. Billions were made and lost during the dot-com bubble, and still, nothing changed. And then the housing market died and everything changed, except nothing changed. That’s the story behind The Big Short.

This is more or less the story of several groups of investors who virtually simultaneously discovered the dismal truth behind the American housing market and decided to short the various mortgage bonds. I’m not much of a financial wizard here, but understand the basics of what happened. Essentially, these investors bet against the housing market because so many of the mortgages were risky and were defaulting. So, while tons of people lost everything when virtually guaranteed investments went bad, these investors made a killing.

I’m not going to go through a step-by-step recreation of the plot as I normally do, because it’s important to see this with all of the details as they happen. The Big Shot is a story of unbelievably corruption from the banks, the government, regulating agencies, Wall Street, and virtually everyone else who could be involved. There’s no happy ending here. Even the people who made the right bets don’t get much of a happy ending.

Because of this, The Big Short is, in a manner of thinking, a sort of post-modern horror movie. What we learn point by point as the story goes on exactly how the housing bubble happened. Lenders provided mortgages to people who couldn’t afford them and then packaged these mortgages into bundles and offered bonds on them. Since for decades these bonds were highly rated and safe, people continued to invest in them. Worse, the agencies that rated the bonds were pressured into giving those bonds high ratings despite them actually being incredibly risky. Even when people had stopped paying on their mortgages and they were going into foreclosure, the bonds were still rated highly. Worse, the various financial institutions started shorting the bonds themselves, meaning that they would profit regardless.

In other words, this is the story of the recession from 2007. This is precisely why The Big Short is a horror movie. It’s a horror movie because it really happened and the monsters—all the bankers and regulators—got away with it and despite destroying the lives of millions of people, walked away richer than before.

There are plenty of solid performances here, particular Christian Bale, who is more or less a high-functioning autistic and one of the first to notice the impending collapse of the market. Bale has no social graces here and he’s not supposed to. Similarly without social graces is Ryan Gosling, who is sleazy and greedy, and also serves as the narrator. It's Steve Carell who is in many ways the most interesting, though. He's demonstrating that like a number of comedians before him, he's more than capable of serious roles.

It’s the way in which The Big Short is told that is most interesting, though. At several points in the movie, we’re given short primers on how the whole system works by a variety of people, like Anthony Bourdain, as themselves. These are really helpful for those of us without much knowledge of the financial world. At other times, characters in the film break the fourth wall and explain to us how the events in the film are different from what actually happened in reality. It’s an interesting choice, and it works extremely well.

The truth is that the resolution of The Big Short is incredibly depressing. As I said above, there are no happy endings here, and what’s worse is that there’s a strong likelihood that no one who was involved in the creation of this problem has learned anything from what happened. Money attracts money, and it also attracts corruption. It may not happen again within my lifetime, but this is history that will repeat itself. We’re not smart enough to really learn a lesson and we don’t have enough power to prevent it from happening again.

Why to watch The Big Short: It defines must-see.
Why not to watch: You will not be happy at the end.