This is the ninth in a series of twelve movies suggested by Nick Jobe. 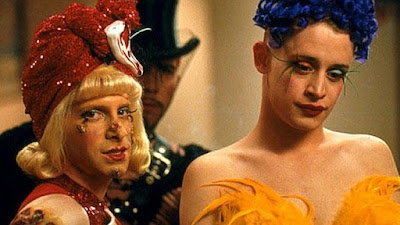 When Nick gave me a list of 12 films this year, he had pretty much free rein, provided that the film in question was one I hadn’t seen before. Sometimes, Nick likes to throw me something weird and difficult to explain. In the past that has included films like Ink, The Battery, and yes, even The Room. He could have gone with surreal weird like Hausu (which I’ve seen, but this year) or gone to hurt me emotionally with something like Dead Girl or A Serbian Film. Instead, he graced me with Party Monster.

I understood immediately why Nick wanted me to watch this. In the first 10 minutes we get more fourth-wall breaks than I normally see in a month. Nick is a sucker for a broken fourth wall. In this case, those fourth wall breaks come from the people Party Monster is about: Michael Alig (Macaulay Culkin) and James St. James (Seth Green).

Party Monster is the story of the New York club kids in the late 1980s and early 1990s. The club kids scene was essentially made up of young kids (25 was considered too old) who dressed in increasingly bizarre costumes who essentially made a living by being paid to show up at clubs and party. In a real sense, they were the logical extension of Andy Warhol’s idea of everyone being famous for 15 minutes, a gang of drug-addled youth who were famous for being famous. James St. James was more or less the original club kid. He takes Alig under his wing briefly when Alig arrives in New York. Alig then teams up with club owner Peter Gatien (Dylan McDermott) and beings throwing parties. After a rough start, Alig’s parties become the in thing in New York, and the club scene becomes the place to be.

Of course, with fame and non-stop partying comes all of the attendant problems. In this case, those problems are exacerbated in a number of specific ways. First is that the club scene, with its emphasis on glitz and publicity, was necessarily auto-cannibalistic. Promotion is everything, and if that means throwing someone under the bus, creating devastating rumors, or what have you, so be it. Not even the death of Alig’s first superstar creation (a heavily costumed Marilyn Manson) slows down the party for even a single night. This is a world where your best friend is also your worst enemy—Alig and St. James publically both love and hate each other passionately. And so, of course, jealousy plays into things as well.

The other serious problem is drugs. Everything revolves around various club drugs, each of which is variously classified in terms of legality. In fact, one of the driving threads of the narrative is the death of Angel (Wilson Cruz), another club kid who doubled as a drug dealer for a great deal of the club scene. That Angel’s death was caused in part by Alig, who eventually disposed of the body, is all a part of the narrative as well. And it’s all part and parcel of the personae of the characters that Angel’s death is merely another adventure that Alig goes on, at least from his perspective.

So let’s get to the film itself, because dealing with this is an interesting experience in terms of my reaction. This is a case where we are presented with two performances—those of Culkin and Green—that are exceptional in their own ways. The issue is that these are exceptional performances of two people who the vast majority of the audience will want to slap until their hands go bloody. These are truly repellent people who are entirely surface. There is no real person under the skin—they (and most of the club scene, in fact) are nothing more than a fictional persona grafted on to a costume. They are veneers of people, toy balloons of affectation filled with air and nothing of substance.

And that’s the hell of this. Both performances are spectacular because they do seem like they reflect the reality of that world and of those people, but the performances are of people who are truly awful in almost every way. And that doesn’t change. Eventually, we see that James St. James—through a massive haze of drugs—starts to understand exactly what is happening. The film is based on his book, after all. And yet by the time the film ends, we see him desperately trying to maintain the persona, even if it’s starting to show a bit at the seams. One of the nicest moments in the film in terms of performance comes in that closing shot, when he is desperate to keep up the façade but we can see in his eyes that he knows it can’t hold for much longer.

Did I like this? I don’t know, honestly. I really can’t tell if it’s better than I think it is or if it’s not as good as I want to think it is. The performances really do make the movie, though, and for that it’s probably worth seeing. I don’t think I can honestly say this is a movie I enjoyed watching, but I think I can say that both Seth Green and Macaulay Culkin show bigger acting chops that we’d have believed they had.

Why to watch Party Monster: Seth Green and Macaulay Culkin.
Why not to watch: You’ll really want to line up all of the characters and slap the crap out of them.