Films: A Better Life
Format: DVD from NetFlix on laptop. 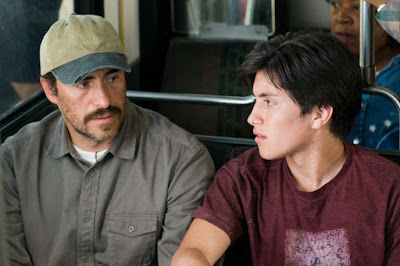 I think making a drama about a current, real social issue is potentially fraught with peril. It has to be easy to slide into melodrama or to be so polemic that the plot of the film becomes something immediately accepted by one side and immediately dismissed by the other. A Better Life, which in its own way looks at immigration in the United States, certainly had the opportunity to walk over that line. It manages not to cross that line in most cases for one simple fact: it tells a believable, good story of which the idea of illegal immigration is a driving part, but which is not the real focus.

Carlos Galindo (Demian Bechir) is an undocumented alien in California working as the assistant to a landscaper named Blasco (Joaquin Cosio). Blasco has made his money and is ready to go home to Mexico and is hot to sell off his truck, tools, and all of his contracts to Carlos. Carlos, lucky to have a regular job and knowing that he’ll lose that job if Blasco leaves, isn’t really sure he wants to buy the truck and the contracts. Eventually, he contacts his sister Anita (Dolores Heredia) to borrow $12,000 in the hopes of building the business up and moving to a better neighborhood.

This is important to Carlos because of his son, Luis (Jose Julian). Luis is about 15 and, like many a young man in a troubled inner city neighborhood, has a difficult relationship with school and is flirting with the idea of joining a local gang. A large part of that flirtation comes in the person of Ruthie Valdez (Chelsea Rendon), his girlfriend. Ruthie’s brother is prominent in a local gang, and so there is additional social pressure on Luis to join. Carlos, of course, wants none of this for his son. In fact, his entire reason for working as hard as he does and for wanting to buy Blasco’s truck comes from this desire to make his son’s life better, especially because Carlos’s wife has left and he is alone raising Luis.

So, for the first half hour, we see that Carlos is in many ways the embodiment of the American dream. He’s looking to better his life and the life of his son through hard work and enterprise, in this case despite being undocumented. And then, of course, things are going to take a turn for the worse so that we have two more acts. Carlos buys Blasco’s truck and business, and heads out to a street corner to hire workers for the day. The man he hires is Santiago (Carlos Linares), who offered him food one day when both couldn’t get hired for day jobs. It turns out to be a bad choice, because while Carlos is climbing a palm tree to tend to the high branches, Santiago runs off with his keys and steals his truck.

Much of the second act is taken up with the hunt for Santiago, a quest that includes Luis and a chance for Carlos and his son to attempt to bond and for Luis to try to understand his father’s world and what he is working for. This culminates with the pair stealing back the truck and being pulled over by the police, getting Carlos involved with the immigration authorities and threatened with being deported to Mexico.

Since A Better Life is a modern film and a serious one, we’re not going to get a sort of happy Hollywood ending here, but something far darker and far more real. It highlights one of the serious issues that comes up with the idea of the undocumented. Carlos can’t go to the police when his truck is stolen and sold to a chop shop. He can’t, because he doesn’t have a legal driver’s license and because any contact with the authorities is likely to get him sent back to Mexico, away from his son and away from the life he has built. His ultimate goal is to become legal—a path his sister has taken through marriage and that his son has as a birthright—but every path he has to climb out of the hole he is in is blocked to him.

Again, it would be easy for this to be a melodrama, and had this been made 60 or 70 years earlier, it certainly would have been. Where the film succeeds is in making Carlos a real person with concerns that are easy to sympathize with. He wants, in a real sense, pretty much the same thing that just about everyone wants. He wants to better his life. He wants to be treated with dignity. He wants a better and more real chance for his son. It works because Luis’s struggles are real as well. Luis, like most teens, is rebelling against the closest authority figure he has. But Luis’s ability to rebel is limited to joining a gang because there are no other ways for him to break away from what he sees as the menial and drudgery-filled life of his father.

A Better Life depicts a world where the odds are supremely stacked against everyone playing the game. All of this comes through because of the performances of Jose Julian, who is believably angry and still sympathetic as Luis, and especially the performance of Demian Bechir (whose nomination prompted this viewing). Bechir manages to make Carlos Galindo completely human and completely sympathetic. It would be easy to make him something more than he is or equally easy to make him something far less. Bechir decides instead to make him real and understandable, and that’s what makes this work. For me, it wasn’t until a good distance into the film that I really started to understand what was motivating Carlos, and that made him all the more believable and the film all the more powerful.

This isn’t a perfect film, but it’s a hell of an argument for the necessity of fixing the way the system works.

Why to watch A Better Life: It puts a real face on immigration.
Why not to watch: If you want a wall to the south, this will fly over your head.

Posted by SJHoneywell at 8:25 PM