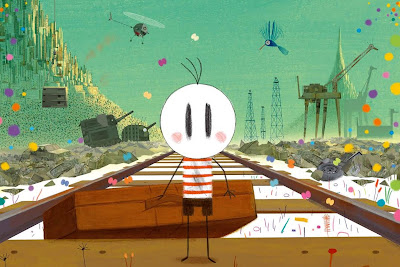 There are times when I wish that my interests in film were different than narrative and similar ideas, because a film like Boy and the World isn’t really about the narrative. Oh, there’s something like a narrative here, sort of, but that’s not the thrust of the film. This is much more about the experience and the art, and while the actual narrative is important in the sense of what the movie actually means, the actual story is very much secondary.

Boy and the World (which also goes by its Brazilian name O Menino e o Mundo) is a very simple story. A young boy named Cuca lives in a world that, through his perceptions, is filled with wonder and a sort of magic. He loves nothing more than listening to his father playing the flute. Cuca and his family live in the country, and for Cuca, this is idyllic. However, reality intrudes. Needing money, Cuca’s father leaves to go find work in the city. Cuca is distraught over his father being gone, and while his mother attempts to console him, eventually he packs a picture of his family and heads off to the city himself to find his father.

What Cuca finds is in many ways filled with the same sort of wonder as his country existence. But the world is also greatly mechanized. He encounters an old man who is beaten down by life. He also spends time with a younger man who works in a factory making multi-colored ponchos and spends his free time playing music on a beach. Both the old man and the younger man seem beaten down by the system. The older man has essentially lost any joy he had in his life, while the younger man still has some art and beauty, but this seems to be driven out of him when he loses his job because of mechanization.

And that’s really the story. There’s not a great deal else here in terms of the story, except for something I will put under a spoiler. In truth, it’s actually pretty significant:

I think what we’re to get here is that the old man and the younger man are really either both Cuca, or are what Cuca will become. In fact, Cuca in many ways may simply be the old man remembering what his life was like when he was young and full of wonder and the world was full of beauty. The old man may be remembering his younger self as well. It’s the interpretation that makes the most sense to me—it’s sort of an animated time travel, jumping far into the future and slowly coming back to the present, or starting by jumping back into the past and then catching up to itself.

So let’s talk about what is really interesting here: the artwork, music, and language. The language is the easiest to deal with—there’s no real dialogue in the film. Instead, any language we do get is actually backwards Portuguese. This comes up only a couple of times, and it really isn’t that critical to seeing what is going on. It’s an interesting choice and one that works for the film. The music is very much at the heart of Boy and the World. The tune that frequently plays is simple, but infectious without being annoying. The art is simple, more or less made of enhanced stick figures. It’s surprisingly robust, though, and gorgeous to look at. The simple nature of the art is quite effective for a story that is ultimately simple.

But it’s the meaning that really drives the film. Boy and the World actually contrasts two different worlds. On the one hand, we have the world of Cuca’s youth and in some ways the world of the young man. The one world is natural, simple, and beautiful. The other world has its beauty as well, but it’s much harsher, has steeper and more severe consequences, and is somewhat heartless. That we get actual footage of logging, one assumes in the Amazon, adds a level of this as well. The world Cuca belongs to would never cut down trees with a chainsaw, while the industrial world will, and will also happily toss aside workers when it can find a cheaper way to get the job done.

If there’s a problem here, it’s that things are perhaps too dreamy, even for an 80-minute movie. I nearly fell asleep a couple of times, and not from boredom. It’s more from the atmosphere of the film itself. It’s sort of an animated, protagonist-driven version of Koyaanisqatsi. I think it’s worth seeing, but I recommend some caffeine when you are sitting through it.

Why to watch Boy and the World: It’s pretty almost in spite of itself.
Why not to watch: It’s perhaps a little too dreamy.