This is the ninth in a series of twelve movies suggested by Chip Lary. 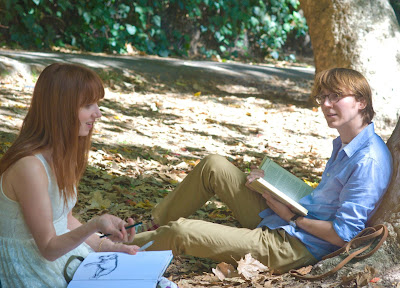 Chip and I had different tastes in movies, as is evidenced by the fact that we sometimes didn’t like a movie that the other person selected. This year has had a few close calls for me on Chip’s films, but nothing that slid below the “3 stars = like” criterion I use on Letterboxd. Well, there’s a first time for everything, and Ruby Sparks is that first time. I went into this expecting something very different than I got, because what I got was a clunky, mean-spirited version of the rather charming Stranger than Fiction.

Calvin Weir-Fields (Paul Dano) was a writing phenom who took the book world by storm at the tender age of 19. Since that time, and after great acclaim and endless groupies, Calvin’s output has been a few short stories and a long chunk of writer’s block. Calvin also struggles on the personal front. His introverted nature keeps him from developing new relationships and his relationships with women tend to be more about sex with fans, who see him as an idealized version of himself instead of as the person he really is.

His therapist (Elliott Gould) suggests that he do a writing exercise—he should write about someone who likes his dog Scotty. Calvin dreams up a girl named Ruby Sparks and starts writing about her. As he writes, he becomes more or less infatuated with his creation, essentially falling in love with her Pygmalion-like. And then, since this is a movie, Ruby Sparks (Zoe Kazan) materializes in his apartment, becoming a real person as Calvin has written her. Every bit of backstory, every quirk and habit is present in the real Ruby.

It takes Calvin a little while to figure out that Ruby is a real person. It takes even longer for him to convince his brother Harry (Chris Messina), which he does by typing things about Ruby and seeing them manifest in her. Determining that he is in love with his creation, Calvin declares that he will never write about Ruby again. Ruby, at this point, is still sort of under Calvin’s control, but since he is no longer directing her with his writing, she starts to pull away from him emotionally. Upset by this, Calvin goes back to writing about Ruby, changing her personality.

The main selling point of Ruby Sparks is the magical realism of the story. In a lot of cases, that would be a significant sell, but in this case, it’s a story that’s been seen and told before. If nothing else, this is a newer version of Stranger than Fiction with almost all of the charm removed. We’ll get back to this comparison soon enough. Even without that, though, this is merely an updated version of the classic Pygmalion story of a man who falls in love with his creation and has it come to life.

But, in the modern context, this is almost literally a gender-swapped Stranger than Fiction, but not nearly as entertaining or as charming. Stranger than Fiction works because we come to genuinely care about all of the characters in the drama. We want the writer to find her muse again and get out of her writers block. But, at the same time, we know that this may cause her to kill off the character that we’ve come to like over the course of the story. None of that is present in Ruby Sparks. None of these characters are likeable in any respect. Calvin, who I think is supposed to be sympathetic, is merely pathetic. He’s enough of a poseur that he uses a typewriter until the final few minutes of the movie, when he upgrades to a Mac. He’s completely self-absorbed and his brother is reprehensible. Even his hippie mother (Annette Benning) and her Bohemian boyfriend (Antonio Banderas) aren’t that interesting.

All of this could be forgiven if Ruby was at all an interesting character. She’s not. She’s mainly completely under the control of Calvin, making her horribly clingy, deliriously happy, or manic. When she’s not she’s simply unpleasant. She comes across as a manic pixie dream girl—minus the pixie and with the “dream” part being literal. And even then, she’s not someone I’d want to spend any time around.

I understand that a lot of people like Ruby Sparks, and in a way I’m a little surprised that I didn’t. I tend to like romances when they run to the darker side of things. A romance where I genuinely don’t care about the characters is right out, though. For a film that’s going to at least try to play with the heartstrings, I need to be invested in the characters. I couldn’t wait to get away from all of these people, and I genuinely didn’t care if Calvin and Ruby end up together or never see each other again.

It’s the first straight-up miss of the year for Chip’s list. It happens.

Why to watch Ruby Sparks: It’s a different take on Stranger than Fiction.
Why not to watch: It’s ultimately kind of mean-spirited.