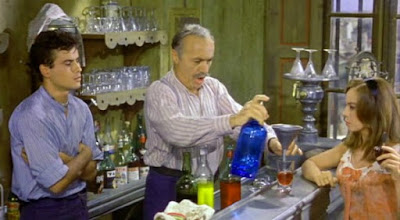 A film like Fanny being nominated for Best Picture shows just how clearly things have changed in the public’s expectations of films in general. I’d be hard-pressed to suggest that Fanny is one of the five best films of 1961 in general, but today, it wouldn’t even make it into the crowd. Oh, I’ve no doubt that it’s well-made. Fanny, more or less, is a musical without the singing. I’d say it’s reminiscent of The Umbrellas of Cherbourg, which it is, except that this movie came first by three years.

So here’s the story. Young Marius (Horst Buchholz) works as a bartender in his father’s Marseilles bar and dreaming of the sea. The only things keeping him back are his father Cesar (Charles Boyer) and Fanny (Leslie Caron), who turns 18 on the day the film begins. Marius’s crazy friend who is called The Admiral (Raymond Bussieres) tries to push Marius to the sea, and Marius wants to go; he’s even packed and has his papers in order. Even better, a scientific expedition is getting ready to sail on a five-year voyage, and Marius is accepted as crew.

The monkey in the wrench is Panisse (Maurice Chevalier), a recently-widowed and wealthy local merchant. Panisse is looking to remarry, and he’s got his sights set on Fanny. Not knowing this, Fanny flirts with the old merchant trying to make Marius jealous. Panisse takes it seriously, though, and asks Fanny’s mother Honorine (Georgette Anys) for Fanny’s hand. Fanny doesn’t want to marry the old man, of course, and refuses.

Since we can’t have a “love” triangle without a complication, we need an event to really kick things off. That event is the night before Marius is to set sail. Fanny and Marius spend the night together, and kind of get caught. Naturally, this means that Honorine and Cesar demand that the two get married. However, Fanny, prompted by the Admiral, becomes convinced that Marius will come to resent her and she sends him off to sea. Of course, she turns up pregnant and ends up marrying Panisse anyway, setting up the third act when Marius returns and discovers that he needs to become acquainted with his son and that he is, of course, still in love with Fanny.

You had to know that it wouldn’t be too long before I started griping about this one, and it looks like I couldn’t make it to 500 words before I had to start complaining. The first complaint I have here is the presence of Leslie Caron. I’ve rarely liked Caron. She’s serviceable in An American in Paris, fine in Father Goose, and just as fine in Chocolat. Beyond that, I’ve never been much of a fan. I actively despise both Gigi and Lili, in part because of Caron but not entirely because of her. In Fanny, the problem is also only partly Caron’s fault. A larger part of the problem is casting.

It wasn’t that uncommon for an actress to be forced to play dramatically younger than her actual age. In this case, Caron was 30 playing 18, and she can only pass for 18 in long shots, and then only part of the time. Even younger, she wouldn’t have much worked for me. Caron generally leaves me cold. So often in films of this era, women are depicted as the embodiment of all that is woman. Caron was never that for me and will never be that for me. She’s supposed to come across (I think) as fresh-faced an innocent, and she simply doesn’t. Since Caron, as the title character, is the central attraction here, this ends up being something of a problem.

These problems are secondary to the problems with the plot. One of the things I hated most about Gigi was the undeniable creeper/predatory vibe of a man of roughly 70 singing “Thank Heaven for Little Girls” to a 16-year-old character. The plot involving the eventual marriage of Panisse and Fanny is no different. Yes, I realize this was a film made in the early 1960s that takes place in the 1920s, but it’s still decidedly creepy that a character in his 60s is actively pursuing a woman less than a third of his age.

On top of that, the plot is nothing special. Plenty of movies can be exceptional without having an intricate or unusual plot, but there’s nothing in Fanny to make it very exceptional. A movie with this simple plot—young couple gets pregnant, young woman marries to secure her future, young couple still pines for each other over years and years—needs to do something more than just have that plot to be memorable. Fanny doesn’t.

Oh, Charles Boyer is good as Cesar, but that’s not really notable. Boyer almost always was good and worth watching even if the movie wasn’t much to speak of. I liked seeing the young Horst Buchholz here as well. But really, that’s about all I have to say in the film’s favor. Boyer handles the role of Cesar like a champ; this is especially noteworthy when he’s standing next to the bombastic and histrionic Maurice Chevalier.

Admittedly, Fanny was starting out with a lot of strikes against it for me. There are a number of films who have overcome those strikes and become films I like. Fanny doesn’t have anything close to enough to make it even interesting, let alone good.

Why to watch Fanny: Everyone forgets about Horst Buchholz and they shouldn’t.
Why not to watch: Movies don’t get sappier.