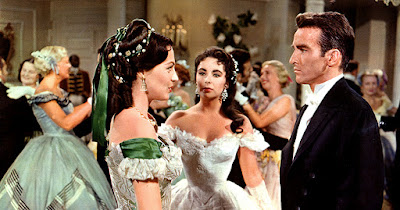 I keep a fairly extensive database of the movies that I still have to watch on my various Oscar lists. One of the things that I track is movie length, because I don’t want to get to the end of this with nothing but three-hour epics left to watch. For whatever reason, I had the 168-minute Raintree County listed as a movie of about half that length. This is also a movie I have had DVRed for well over a year; there were too many aspects of it that made me not want to spend all of that time with it. Still, I had to watch it eventually, and since I had the house to myself for a large part of today, I figured this was as good a chance as any.

I’m not kidding when I say that there’s a lot here that I typically don’t like. American Civil War dramas don’t really do a lot for me. This is also the part of Montgomery Clift’s career of which I am not much enamored. There was a chunk of his career where he came across as more whiney and wimpy. That works in films like The Heiress, but not in a film where he is being put forth as a paragon of moral virtue and a standard of decency. Raintree County is also a straight-ahead melodrama complete with the sort of overacting that the style requires. Even a solid cast that includes Eva Marie Saint and Lee Marvin couldn’t make things happier for me. Not even the presence of a young DeForest Kelley could rescue it.

We start in the eponymous Raintree County in Indiana in the years before the war. Young student John Shawnessey (Montgomery Clift) is a good student with plans to become a writer. He romances young Nell Gaither (Eva Marie Saint) and listens to the life lessons of his teacher (Nigel Patrick). All seems well until the arrival of Susanna Drake (Elizabeth Taylor), who has arrived from Georgia and turns young John’s head. There is a whirlwind romance, feats of athletic prowess against Orville Perkins (Lee Marvin), and eventually Susanna returns to Georgia, leaving John to try to repair his relationship with Nell. Soon thereafter, though, Susanna returns claiming to be pregnant, and John, filled with responsibility, marries here and the pair head to Georgia.

It’s here that the film takes a different course. We learn about the past of Susanna’s family, including a terrible house fire, her father’s evident taking of a Cuban woman as a concubine, and the eventual insanity of Susanna’s mother. It’s hinted, in fact, that Susanna may actually be the daughter of her father’s concubine, although this is never really explored. But the insanity angle surely is. Susanna admits that her pregnancy was a farce created to force the marriage and she begins to show signs of losing her mind just a little bit. John decides that it’s Georgia that’s the main problem and he returns his family to Raintree County. It doesn’t seem to help, though. John digs a little deeper into Susanna’s dark past. The two eventually do have a son, but Susanna loses her mind more and more, eventually fleeing back to Georgia with their son at the outbreak of the war. Naturally enough, John joins up, specifically with the intent of locating his family.

Certainly there are some bright spots in Raintree County. Lee Marvin was always a joy, even in a film like this where he is required to be bigger-than-life at all times. But very little here works for me. This is like everything that I didn’t like about Gone with the Wind tied up into a single movie, including the over-long running time. Wars make for grand spectacles, of course, but we don’t get close to the war until the final third of the film, and once we get there, we’re not there for too long. No, the war is merely an excuse for us to track down Susanna and the boy and nothing else. It may well have been a better and more interesting movie if it did focus on the war, because John Shawnessy’s family problems aren’t that interesting.

I get why Montgomery Clift might have been thought of as a good fit for the role of John Shawnessy, but I don’t think he fits the role. Clift was always better in roles where he was filled with moral quandaries. There’s one of those here, but it is such an obvious one and happens too soon and without anything like a struggle that Clift could do well.

It’s Elizabeth Taylor’s performance that put this on one of my lists, though, and while she’s important for large parts of the film, there are large parts where she’s virtually absent. For her part, Taylor essentially seems to be trying to recapture whatever magic there might have been left in Vivian Leigh’s portrayal of Scarlett O’Hara without much effect. Taylor was a good, even great actress when she had good material to work with, but this wasn’t good material and I don’t buy her as a Southern belle for a second, let alone a three-hour movie.

Ultimately, there’s just not enough here for me to be interested in and there’s far too much of it for me to care about it. And worst of all, it takes two and a half hours getting to what could be an interesting ending, and then speeds through a ton of material and plot points in a quarter of an hour. Unless you need to watch it, you’re probably better off ignoring it.

Why to watch Raintree County: A sweeping story?
Why not to watch: It’s everything that doesn’t work about Gone with the Wind and not much more.

Posted by SJHoneywell at 9:44 PM