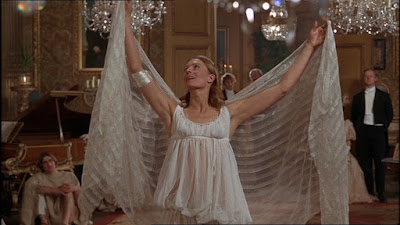 I’ve mentioned here before when I thought it was relevant that both of my daughters are dancers, and very serious dancers. My older daughter, at 18, is a year away from her college degree in dance performance, when what would have been her high school graduating class is fininshing its first year of college. My younger daughter spent this past summer at the Joffrey Ballet in Chicago, much to the detriment of my bank account. When I come to a movie like Isadora (sometimes called The Loves of Isadora), I have certain expectations and preconceptions. This is, after all, the story of the dancer Isadora Duncan.

I should come clean at the start here and admit that the version of this that I could find—no library in my state seems to have a copy to lend and NetFlix certainly doesn’t have it—had some problems. The primary problem is that the film seems to have been cut off a bit at the sides and a little at the top. Whenever I’m faced with a situation like this in which the copy of the film I am reviewing has particular deficiencies, I try not to let that affect my final opinion. It’s worth bringing up, because it would be easy to suggest that had I seen this in a different format, I may have liked it more.

And that’s the thing here—I really didn’t like this movie at all. There’s a great deal to dislike here, starting with the character of Isadora Duncan (Vanessa Redgrave) herself. Isadora is more or less a straight biography of her, evidently based on her own autobiography. Based on that and assuming the film is accurate and that Duncan’s autobiography is accurate and not filled with fantasy, I think it safe to say that I would have disliked Isadora Duncan in real life. Duncan, as portrayed here, is the sort of person who seems to believe that rules don’t apply to her. She is so wrapped up in her own importance as an artist that things like other people, responsibility, and the like simply don’t matter.

So let’s talk about the dancing, which should naturally be the focus of a film about a dancer. Here again, I don’t really know how I’m supposed to react to the film. Isadora Duncan may well have been one of the most influential dancers of her age, and Redgrave may well have spent half a year learning how to dance like her, but I have to wonder what the fuss was all about. The vast amount of dancing here seems to consist of Redgrave spinning around in circles and skipping. It hardly seems that impressive.

I genuinely dislike Isadora as a person. She evidently has no conception that other people actually exist in any real sense, actively courting new lovers in the presence of men she is living with. She is so demanding of the recognition of her great talent that everything else becomes a secondary consideration. In one of the scenes that takes place in the present, she is introduced to a writer and demands that he buy her a car. When he naturally refuses, she has him removed from her presence. After all, as she says, “I can think of no better use for your money than to bring me pleasure.”

In fact, when one of her many lovers (Jason Robards), who has spent uncountable money on her and is the father of one of her children discovers her infidelity with her pianist, she’s the one who gets offended. Why? Because he was spying. She sees no reason for him to be upset at the fact that she was essentially being unfaithful to him in front of his servants and in the back seat of his car. After all, everything is about her and the rules don’t apply to her.

This goes on and on and on, eventually getting us to Isadora’s legendary death at the end of the film. All of the moments of the film that take place in the film’s present (most is in flashback) involve Isadora’s obsession about tracking down Bugatti, who nearly kills her with his car a couple of times. She finally catches up to him, goes for a ride, and when her long scarf is caught in the spokes of one of the wheels, she is strangled to death. Sorry if that’s a spoiler for you, but since she’s been dead for 90 years, you only have yourself to blame.

Anyway, I don’t have a lot positive to say about Isadora. I hated every character in the film completely. I hated their attitudes, their self-aggrandizement, their self-importance, and pretty much everything else about them. I suppose Vanessa Redgrave’s performance—the only reason I had to watch this pretentious mess—is good for what she was asked to do, but I can’t help but think at this point that there were more worthy performances for nomination in 1968.

I talk about movies that are “one and done” now and then, and Isadora is the textbook definition of a film I don’t want to watch again. I was ready for this to be over a good hour before it finally ended.

Why to watch Isadora: The music is good? Jason Robards, perhaps?
Why not to watch: It’s ridiculous, and so is Isadora.