A Dickens of a Story 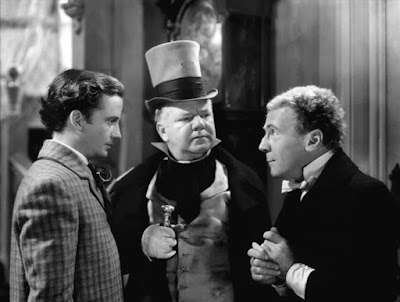 My mother is a big fan of the work of Charles Dickens. I’m not; I think it’s evident when you read Dickens that he was paid by the word. I don’t appreciate his wild coincidences and I tend to hate the ridiculous names of his characters. To that end, I’ve delayed the watching of David Copperfield until now. It wasn’t so much fear as an assumed dislike. I don’t like the author in general, so I likely won’t like a movie based on one of his overwritten novels.

That’s not quite the case. There are a number of things that are really going for David Copperfield. However, it is the case in the sense that the story isn’t really one of the things going for the movie. David Copperfield is less a plot-driven tale than it is a sort of biography of the title character, taking him from his birth to the approach of his second marriage.

David Copperfield (Freddie Bartholomew as a boy, Frank Lawton as an adult) is born to a widow (Elizabeth Allan). He has a few good, if fiscally tight years with his mother and their housekeeper, Clara Peggotty (Jessie Ralph). One day, Peggotty and David head to Peggotty’s brother for a visit (and yes, she is called Peggotty throughout—I only know her name is Clara based on the Wikipedia page). When they return, David’s mother has remarried the stern Edward Murdstone (Basil Rathbone), a domineering man who slowly drives David’s mother to death after giving birth to a child, who also dies. David is then sent to London to work. It is here that he meets the Micawbers, primarily Mr. Micawber (W.C. Fields), who is eventually thrown into debtors prison. Eventually, he gets out and suggests that David head to visit his Aunt Betsey (Edna May Oliver) in Dover.

I’m going to stop with the play-by-play here, because this is really the major weakness of David Copperfield as a narrative. This is more or less a series of events. David’s friend from school runs off with the adopted niece of Peggotty and eventually abandons here. David eventually marries a scatterbrained young woman while failing to recognize the unspoken love of Agnes (Madge Evans), the daughter of Wickfield (Lewis Stone), Aunt Betsey’s lawyer. Wickfield is assisted by the obsequious Uriah Heep (Roland Young), who will be the main foil for the second half. There are marriages and elopements, and deaths and confrontations, and eventually we’re going to get the happy ending we’re expecting.

So I’m of a couple of minds here. On the one hand, this is a sumptuous and expensive-looking production. It’s also beautifully cast. This was early in Freddie Bartholomew’s career and probably the best of his early work. In fact, for the first half of the film, he is one of the clear bright spots. The brightest spot, though, is W.C. Fields who gets a chance to more or less play himself as the scatterbrained and frequently overtaxed Micawber. Fields doesn’t attempt a British accent and it doesn’t matter; we accept him immediately for who he claims to be.

The rest of the cast is fine as well, and succeeds in the main by getting accomplished actors like Rathbone for parts that are quite small. This does make the film a treat.

That said, I don’t give a rip about the story at all. David as a character is fine enough, but he’s someone who often seems to witness things happening rather than having things happen to him. Because of this, it often feels like our David is getting moved around from place to place so that he can witness something important happen to someone else. He doesn’t really seem to do a lot other than exist and show up to be in the right place at the right time.

Beyond that, the story doesn’t really go anywhere. David has trials and tribulations and grows up. Once he is grown up, there are a couple of marriage issues that he is forced to deal with, and then he lives happily ever after. There’s no real less that he learns and nothing beyond getting him to end up with the right woman. And the second that happens, the film ends.

So, it’s not that bad, but it’s also not that great. I appreciate it for what it is, but I’m unlikely to get beyond simple appreciation.

Why to watch David Copperfield: W.C. Fields was a goddam treasure.
Why not to watch: Dickens’s work was evidence that he was paid by the word.