Film: The Field
Format: DVD from Rockford Public Library on The New Portable. 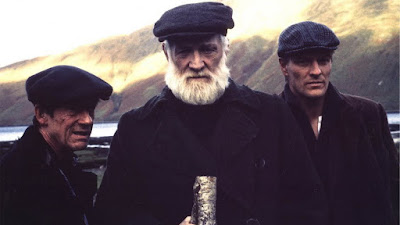 I think it’s easy to think of Richard Harris as his last roles. Specifically, I’m thinking of him as Dumbledore in the first two Harry Potter films and as Marcus Aurelius in Gladiator. In all of these cases, Harris was staggeringly old and frail, a man who looked like he could be blown away with a stiff breeze. He was a far cry from the man he was in the 1960s in films like This Sporting Life. So where was he going to be in 1990 in The Field? Would he be the physical specimen of his early years or would he be the wizened man who could be snapped like a twig?

It’s a little bit of Column A and a little bit of Column B. Harris looks like an old man, far older than the 60 years he actually was. But once you see him move and talk, he behaves like a man half his age. This is a vibrant performance in the body of an older man, and because of it, it’s interesting. It’s also interesting in that it is Harris’s second of two nominations. His first came in 1963 and this one came a full 27 years later. Is that the biggest gap between nominations? Probably not, but it’s got to rank pretty high.

As the name The Field implies, this is going to be about a field. The field in question is in Ireland and is a bit larger than three acres. The field is currently worked by “Bull” McCabe (Harris) and has been worked by his family for generations. It is not owned by them, though. It is currently owned by a young widow (Frances Tomelty) and rented by the McCabe family. Despite the ownership, McCabe feels as if the land is truly his—when his family started on the field, it was barren and rocky and is now productive.

Bull McCabe’s biggest current problem is probably his son Tadhg (Sean Bean). When the film opens, Bull and Tadhg (which is pronounced “Tie-g” with a hard g) are dumping the body of a donkey into the ocean. The donkey evidently got into the field and Tadhg killed it for its trespassing. Tadhg is also the source of a much larger problem. For years, he has been harassing the widow who owns the family land, hoping to get her to sell it. On the tenth anniversary of her husband’s death, she finally agrees to sell, but refuses to sell directly to McCabe. Instead, she demands a public auction. For McCabe, this makes no difference. In his world, there is not a person in the town who would dare bid against him for the land he considers his.

The problem comes in the person of Peter (Tom Berenger), an American who has shown up in Ireland in pursuit of something like his family history. Peter has decided that he can start a business in this small town because of the limestone in the hills that surround it. Concreting over the field would give him easy access to the limestone, and this would allow him to help supply the materials to pave roads all over the country. For Bull McCabe, paving over the field is sacrilege, a crime against God and nature.

There are depths to the character of Bull McCabe, though, that come out over the course of the film. We learn from his friend Bird’ O’Donnell (John Hurt, and yes, it’s written as Bird’) that Bull and his wife Maggie (Brenda Fricker) have not spoken to each other in about 18 years. This has something to do with the death of their first son, Seamus, who is regularly called “Shamie” whenever he is referred to. This is important because of its homophonic similarity to “shame.”

So here’s the thing: The Field has a hell of a good cast. Tom Berenger is fine in this role, and it’s a role that suits him well. Brenda Fricker is a magnificent actress who most people don’t know. Sean Bean is Sean Bean, and John Hurt is a personal favorite of mine. And all of them take a set behind the powerful performance of Richard Harris as Bull McCabe.

What I find so staggering here is that Harris’s performance in The Field is as physically vibrant as he was nearly three decades earlier in This Sporting Life. There is a moment when he both breaks up and continues a fight between Peter and Tadhg. At one point, here is Richard Harris dragging Tom Berenger and Sean Bean by the scruffs of their necks, and when this happens it does not in any respect feel like this couldn’t happen. But it’s not simply the physicality of the performance. There is a gravitas to this performance that is staggering. Harris communicates so much with just a glare or a frown. He stalks through this film like a caged animal until the events essentially overwhelm him. The transformation is just as impressive as everything else about it.

Do I like it, though? I don’t know. It’s a well-made film and a smart one, but it’s also the sort of film that doesn’t have any happy endings for anyone involved. So, it’s good but it’s a far cry from being life-affirming.

Why to watch The Field: Richard Harris was always at the top of his game.
Why not to watch: Nothing good happens here.

Posted by SJHoneywell at 8:46 PM