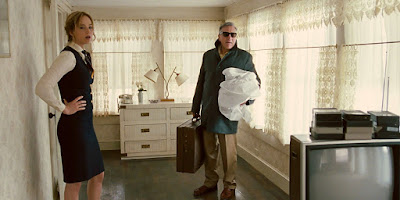 I’m getting close to the end of the Oscar movies on my various lists, which means that, more and more, I’m watching movies that I’ve avoided for one reason or another. Well, that’s kind of true. In some cases, I have more or less actively avoided the movie in question. In some cases, I haven’t been able to find them. In the case of Joy, it’s definitely the first issue. I’m pretty burned out on Jennifer Lawrence right now, so I haven’t really wanted to dive into this one.

Joy is the story of Joy Mangano (Lawrence), a divorced mother of two living in a unique situation. Frustrated with her life and more or less coming apart at the seams, Joy invents a self-wringing mop and becomes a sensation on home shopping channels. The movie is a biography and so I assume that at least some (or even most) is based on reality. But it also very much feels like a reunion for a lot of people in Silver Linings Playbook, a feeling that is very much enhanced based on the relationships in the film.

Take, for instance, Joy’s living arrangement. She works for Eastern Airlines and does not quite well enough to make ends meet, so her income is supplemented by her father, Rudy (Robert De Niro). As the film begins, Rudy is kicked out of his house by his third wife and ends up moving into the basement of Joy’s home with Tony (Edgar Ramirez), Joy’s ex-husband. Joy’s mother Terry (Virginia Madsen), who is Rudy’s second wife, lives essentially in one room in the house where she spends all day in bed watching soap operas. Also living in the house is Terry’s mother Mimi (Diane Ladd), who will be our narrator through the film. Rounding out Joy’s family is her half-sister Peggy (Elisabeth Rohm), who seems to spend most of her time putting Joy down. Also in the picture are Joy’s supportive friend Jackie (Dascha Polanco) and Trudy (Isabella Rossellini), the candidate to be Rudy’s fourth wife, and the woman who will soon be Joy’s main investor.

So how this goes will be pretty much what you expect. Joy creates her new invention and convinces Trudy to invest in it. After some false starts and the requisite “life falling apart” moment of her phone being cut off and both kids getting sick, Joy—through Tony—lands an interview at QVC and meets Neil Walker (Bradly Cooper), who puts her on the air with her self-wringing mop. There will be additional set-backs and a great deal of family infighting, including dirty dealing, lawsuits, and more, but eventually, things are going to come out the way we’ve more or less been programmed to assume they would.

So here’s the thing: I’m getting kind of tired of Jennifer Lawrence, or at least I’m getting tired of her in this kind of role. Or maybe that’s not quite it. Maybe this feels too close to Silver Linings Playbook to me, with the messed up relationships and De Niro playing a bastard of a father (although not a comedic one. Thank goodness for small favors). This feels so much like David O. Russell trying to recapture that same feel and not quite getting it. This is at least the third Bradley Cooper/Jennifer Lawrence film he’s made in this decade and it feels like we’ve had enough permutations of that relationship. This feels overdone for that specific reason, and for a lot of the running time, I was really ready for this to be over.

I know that sounds harsh. I don’t intend for that to be the case. It’s just that that’s the case.

Look, I’m not trying to be anything other than honest here. This felt like a reunion of Silver Linings Playbook with a bank account, like in many ways this was the natural extension of that film, a sort of spiritual sequel. It also feels very much like David O. Russell trying to desperately return to that sort of acclaim. SLP got him a lot of notoriety and earned Lawrence an Oscar. American Hustle, made with at least some of the same cast, got a ton of nominations but no wins. Joy feels like he’s trying desperately to get back to that, but managed only the single nomination for Lawrence and nothing else. I don’t know that it’s a mistake or a shock that Russell hasn’t directed anything of feature length since.

Why to watch Joy: Sometimes an inspiring story is what you need.
Why not to watch: Can we be done with Jennifer Lawrence for a bit?