Wednesday Horror: Behind the Mask: The Rise of Leslie Vernon

Film: Behind the Mask: The Rise of Leslie Vernon
Format: DVD from personal collection on The New Portable. 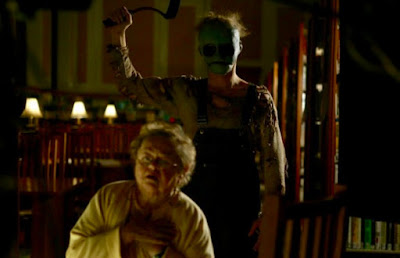 While I love a good horror movie, I can’t admit that I’ve been a huge fan of slashers. The truth is that most slashers seem kind of pointless to me. There’s a guy, there are victims. The guy kills them in a variety of ways. There’s just not a great deal there beyond that visceral slice-n-dice, and I’m not that interested. I don’t mind gore, but I prefer it be there for a good reason. If it’s just there to fill up space, I don’t really care that much. That makes Behind the Mask: The Rise of Leslie Vernon an interesting choice for me.

The truth is that I like this movie quite a bit. The reason is that this is the best send-up of the slasher genre since Scream, and it’s better in a few respects. Scream, brilliant as it is, is really a self-conscious slasher. It’s a movie that plays with genre conventions while clearly being a part of the genre. Don’t get me wrong; I love Scream and I love what Wes Craven did with it. The genius of Behind the Mask is that it takes the next logical step, presenting the behind the scenes look at the life of a supernatural killer.

Truthfully, Behind the Mask really isn’t that new of a concept. It’s very much a modernized and pseudo-supernaturalized remake of Man Bites Dog down to the existential crisis that our characters are put into. The movie posits that characters like Jason Voorhees, Freddy Krueger, and Michael Myers are real and actually exist. In the world of the film, there’s a Camp Crystal Lake and an Elm Street. So how do you become a supernatural killer? A trio of documentarians decides to find out by meeting up with Leslie Vernon (Nathan Baesel), a young man training to be the next one to take the mantle.

Behind the Mask is a film of two parts. The first part takes up roughly the first hour of the film. In this part, our documentary film makers, Taylor (Angela Goethals), Doug (Ben Pace), and Todd (Britain Spellings), meet up with Leslie and find out about his training and his life. They learn about the various theories of picking a final girl and why she actually survives most of the time. They meet Eugene (Scott Wilson) and his wife Jamie (Bridgett Newton), a former supernatural killer and his final girl/wife who act as Leslie’s mentor. They see him start to stalk Kelly (Kate Miner), his final girl, as she looks up information under the tutelage of the local librarian (the unmistakable Zelda Rubeinstein). They also encounter Leslie’s “Ahab,” or counter to his upcoming rampage (Robert Englund).

Much of this early part of the film is also about creating the legend of Leslie Vernon. We discover his backstory, or at least the backstory that people claim to know. He shows off his skills and his training, and also, as we get closer and closer to the date when he is going to being creating his murderous legend, he lays out his entire plan to kill off a gang of teens, leaving only Kelly alive. This comes down to specifics of how he plans to move them from place to place and how he has specifically sabotaged all of the potential weapons she might get so that she’ll only get a single swing.

And then, in the second part of the film, the killing rampage begins. There’s a moment when the film crew suddenly realizes that all of this is real—Leslie is actually murdering people and is enjoying himself while doing it. Since they know his plan, they decide to do what they can to stop him, which leads us through the last half hour of the film. I’m not going to spoil this, but there are a couple of moments here that are among my favorite in the entire genre. The ending is completely brilliant and works in so many ways nearly perfectly. It's also worth noting that Leslie's mask is one of the most disturbing I've seen since Alice, Sweet Alice.

If there’s something that doesn’t work here, it’s that moment of shift. The first hour of the film is clearly made in a documentary style and it looks like a low-budget documentary with hand-held cameras and what appears to be unscripted interviews with Leslie and other people. When the killing starts, there is a triple crisis of conscience. At one point, Taylor, who is the director and on-camera talent for the documentary, more or less says “This documentary is over,” and from that moment forward, it’s not. It’s not just that the film changes—the genre changes, and because of it, the film style changes. It’s a hard transition, and I can see it not working for some people.

But, beyond that, Behind the Mask: The Rise of Leslie Vernon is devilishly clever. It’s a movie that works because it is smart, and it’s a movie the clearly loves the genre it is playing with. The more you know slashers, the more this film works. If you like slashers at all, you’ve probably already seen this, but if you haven’t, you really should.

Why to watch Behind the Mask: The Rise of Leslie Vernon: In a post-Scream world, this is how you poke the slasher genre.
Why not to watch: You hate slashers.

Email ThisBlogThis!Share to TwitterShare to FacebookShare to Pinterest
Labels: Behind the Mask, Behind the Mask: The Rise of Leslie Vernon, comedy, horror, Scott Glosserman