By My Age, They Tend Toward Bitter. 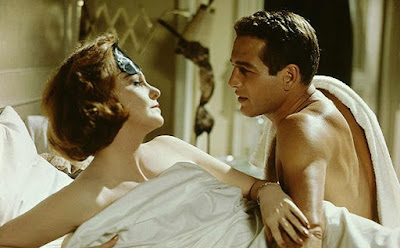 I have, in a sense, painted myself into a corner with the length of the reviews that I write. While there are a couple that are relatively short, I feel like if I don’t at least cross the 700-750 word mark that I’m selling the movie short. With a movie like Sweet Bird of Youth, that’s kind of a problem because I don’t have a great deal to say about it. This isn’t to imply that the movie is a bad one. It’s not at all, but it feels like I don’t have a lot to say about yet another movie based on a Tennessee Williams play. What can I say here that I haven’t said about A Streetcar Named Desire, Baby Doll, or Suddenly, Last Summer?

And yet, I feel the need to soldier on. Once this gets going, there’s no surprise that this is based on something penned by Williams. We’ve got all of the trademarks of a Williams narrative—booze and drugs, sex, illicit relationships, threats, messed up families, and Southern gentility. And, of course, there’s going to be a sense of terrible events that have happened or will happen, secret shame, and immorality. Makes you want to watch it, doesn’t it?

A little detail would probably be beneficial. Chance Wayne (Paul Newman) arrives in St. Cloud, FL, his hometown. Chance has been trying to break into the movies in Hollywood, and has as his latest and best attempt, managed to hook up with fading film star Alexandra Del Lago (Geraldine Page). Chance has a couple of goals. One of these is to somehow coerce, trick, or force Alexandra into being his meal ticket into the movies despite her more or less being on a long vodka and hashish-fueled bender to avoid having to deal with what she assumes is her terrible and most-recent picture. Chance also wants to reconnect with his old girlfriend Heavenly Finley (Shirley Knight).

Of course things can’t really be that easy, can they? This is a Tennessee Williams play, after all, which means that there’s going to be some serious issues between Chance and Heavenly’s father, “Boss” Finley (Ed Begley, who won a supporting Oscar for this role). Boss Finley is a well-known state politician and kingmaker, got rid of Chance in the past by more or less implying that he wasn’t good enough for his daughter and that Chance needed to prove himself and make his fortune. The truth is probably closer to the fact that he likes to trot her out as a symbol of purity and chastity and as a publicity stunt. It also helps cover the fact that Finely is dirty, and political violence in the state is often created by his son Tom Finley (Rip Torn) and to hide the fact that Finley has a mistress named Miss Lucy (Madeleine Sherwood).

Like most Tennessee Williams plays, Sweet Bird of Youth is going to get very nasty and tawdry very quickly. Much of this comes from Chance as he attempts to keep Alexandra under his thumb and tries to contact and win back Heavenly, often using her wizened aunt Nonnie (Mildred Dunnock) as the go-between. As political pressure starts to come at Boss Finely, he becomes more and more desperate, and getting Chance out of the picture becomes more and more important to him. Everyone’s fate seems to hinge on what has happened with Alexandra’s latest film.

There are some significant changes from the stage play to the movie, not in terms of characterization, but in terms of actual events that happen in the play or are hinted at in the dialogue. For instance, it’s hinted at that despite her fostered image of purity, Chance got Heavenly pregnant before he left. In the play, Chance infected her with one venereal disease or another, and the cure ended up being a hysterectomy, leaving Heavenly barren. In the stage play, it is strongly hinted that Tom Finley and his gang of thugs drag Chance off and castrate him. It’s hinted that this might happen in the film, but there’s certainly no evidence it does, and there’s good evidence that it does not.

I get the changes, and find it fascinating that in 1962, it was more socially acceptable to imply an abortion than it was to imply syphilis. I also appreciate that Richard Brooks was able to do some interesting things in places that clearly make this something other than a filmed version of a stage play.

That said, the strength of Sweet Bird of Youth is the cast. One of my first introductions to Geraldine Page was Summer and Smoke, another film based on a Williams play, and one that I disliked, primarily because of her character. Here, Page is brilliant. She’s dirty and flawed and real. Newman is as good as he generally is, trying everything he can to show that he is a success and continuing to fail and to know that he’s failed. But it’s a great cast throughout—Rip Torn, Ed Begley, Shirley Knight, Mildred Dunnock, Madeleine Sherwood—it’s the sort of cast you get when adapted something by a tremendous and tremendously respected playwright.

Is it good? It is, but it’s also very similar in a love respects to other Tennessee Williams plays. It’s almost, but not quite true, that if you’ve seen one, you’ve seen them all.

Why to watch Sweet Bird of Youth: A great cast and a Tennessee Williams script.
Why not to watch: It deviates from what Williams wrote.