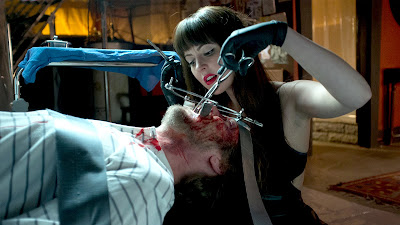 I am a fan of the horror genre and have been for decades, but there are things that bother me. Eye stuff bothers me a lot, for instance. I’m also really bothered by surgical stuff. I’m not entirely sure why that is, but it definitely is the case. Seeing someone go through surgery will get me to leave the room. Because of this reason, I wasn’t really looking forward to American Mary, which is about both surgery and extreme voluntary body modification, which also tends to freak me out a bit.

Regardless of that, I made it through the film, and while there were a couple of spots I found very difficult to watch, for the most part, I enjoyed it. There is a part of the film that I found ridiculously dumb, though, and I promise we’ll get there before we’re done with this review. A film that has this much going for it that so spectacularly shits the bed at one point is not going to escape my review unscathed.

Mary Mason (Katharine Isabelle) is a med student who is experiencing some money problems. Desperate, she decides her only way out is stripping at a local club. We soon learn that the club is quite shady. Rather than stripping, Mary is offered $5,000, no questions asked, if she can perform a few life-saving procedures on a man who has clearly been tortured by goons working for strip club owner Billy Barker (Antonio Cupo). Soon after this, Mary is contacted by Beatress Johnson (Tristan Risk), a stripper from the club who has had some body modifications done to make her look as close as possible to Betty Boop. Beatress has a proposition for Mary; her friend Ruby wants some specific body mods done as well, and offers a total of $12,000 for Mary to do them. Mary agrees, even if she finds that the procedures really bother her.

Meanwhile, back in med school, Mary’s sudden affluence is noticed by Drs. Grant (David Lovgren) and Walsh (Clay St. Thomas). Mary is invited to a cocktail party where it’s soon evident that she is the only woman there who isn’t a hooker. One drugged drink later, and Mary is being raped by Grant, who also happens to be one of her professors. The next day, Mary drops out of school and, with a couple of Billy’s thugs, has Grant kidnapped and brought to her. She decides to dive head-first into the body modification world, using Grant as an unwilling victim to learn her trade.

This takes us a pretty good distance through the film, and had it continued on this path, this would be one of my favorite movies I’d found in a long time, even with the stuff that I have trouble watching. But I have to discuss the huge elephant in the room with American Mary: the ending. The last 10 minutes or so of this movie are so head-thumpingly stupid that I have trouble believing it’s a part of the same film. Oh, it might play as somewhat realistic in a sense, but in terms of narrative structure of the film, what happens is so far from left field that I can’t even explain it. It’s a Monster a Go-Go-level of stupid. So, time for a spoiler.

Mary’s first voluntary client, from way back at the start of the film, evidently has a husband or a guy who hasn’t been in the picture for long enough that he didn’t know about the modifications done to her. Since those mods were, in large part, de-sexualizing her, he doesn’t take it well. He beats up Beatress to discover who did the work, and shows up at Mary’s apartment and stabs her. Mary kills the dude and sutures the stab wound, but bleeds to death anyway. The end. WTF?

I’m so thrown by the ending that I don’t even know what to think in terms of the film as a whole. It’s as if writers/directors Jen and Sylvia Soska wrote themselves into a corner, had nowhere else to go, and cobbled an ending that would just wrap things up as quickly as possible.

It’s a shame, too, because everything up to this point is strange and awful in the best way possible. Katharine Isabelle, probably thanks to her title role in Ginger Snaps has become something of a scream queen, and American Mary is a good indication of why this is the case. She’s a good presence on screen. She’s got strength and looks good on camera and can absolutely hold the focus in a lot of different scenes. Genre work seems to work well for her, and I hope she keeps doing it.

American Mary is an oddly feminist vision. I don’t mean that it’s somehow odd that it is a feminist film, but that the feminism it puts forth is perhaps not the norm. And then it falls off a cliff into full stupid territory. The body modification stuff does, I admit, fully creep me out, but the movie is worth it until it very suddenly isn’t any more. It’s too bad, because that ending took American Mary from being a film I would recommend without question to one that I’m no longer sure I can even say I liked.

Why to watch American Mary: This is not a plot you've seen before, even if the descent into insanity feels familiar.
Why not to watch: The ending is straight-up stupid.