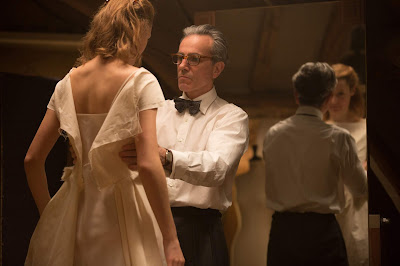 With Phantom Thread, there is really a single story to be told. Star of the film and three-time Oscar winner Daniel Day-Lewis went on record as saying that this would be his last film and that he will be retiring from acting. That is reason enough to watch the film. Day-Lewis is, I think I can say without much fear of contradiction, the most accomplished male actor of his generation. I have no idea who will step up to replace him, but for the last 30 years or so—since his break-out performance in My Left Foot (but really since a few years before that), Day-Lewis has always been worth watching. And yet despite this, I can’t say that I was really excited about this despite being a one-time fan of Project Runway and a constant booster of the wonderful Tim Gunn.

Phantom Thread is something of a love triangle, kind of. It’s a little more complicated than that, really. Reynolds Woodcock (Day-Lewis) is a respected dress designer in London about a decade after World War II. His business is thriving for his upscale clients and at least some of this comes from the constant assistance of his sister, Cyril (Lesley Manville, who was nominated in a supporting role). It’s soon evident that Reynolds has something like a recurrent series of infatuations with women; early in the film, we see him more or less get rid of one live-in girlfriend when she no longer inspires him. Shortly after this, he meets Alma (Vicky Krieps), a waitress. She becomes his new infatuation and his new favorite dress-up doll. Soon enough, Alma has moved into Woodcock House and functions as muse and model for Reynolds.

What plays out for much of the film is the complicated relationship between four players: Reynolds, Alma, Cyril, and the work. Alma is clearly in love with Reynolds’s genius, admitting early in the film that he has fulfilled her dreams and ambitions, something that has happened because she has essentially given over to him completely. In one part of the movie, when a drunken society dame passes out in one of his dresses, it is Alma who goes into the woman’s room and takes the dress back so it isn’t ruined.

But it’s not all haute couture. Wanting to do something special for him, Alma prepares a dinner for Reynolds only to be dressed down because she cooked the asparagus in butter rather than oil and salt. It’s a fascinating moment of petulance to watch Day-Lewis have a full-on tantrum over asparagus being cooked in butter. But this is a pivotal scene, because it begins the war of wills between Reynolds and Alma. Reynolds is a slave to his schedule and the way he does things. At one point, he complains that Alma moves too much at the breakfast table—evidently buttering her toast too vigorously. But Alma has ways to get him back, which consists mainly of mild doses of toxic mushrooms that sideline him for a few days and force her to nurse him back to health, making him dependent on her.

I’m in a very strange place with this film. I’m not really sure what to think about it and I’m not sure what the ultimate message wants to be. There was a lot of buzz about the film’s misogyny during Oscar season, and I see that, but at the same time, the ultimate message of the film is anything but. Hang on—I’ll put this under a spoiler tag.

I think Alma wins the war of wills by the end of the film. After Reynolds insults her terribly, she poisons him a second time, and then admits to him that she has done it, saying that she wants to weaken him and nurse him back to health. She is clearly taking control, albeit in a toxic way. And he, as the film draws to a close, accepts this. He knows what she has done and plans to simply endure the poisoning. Sure, he might fight back at some point, but there’s not a lot of doubt here that Alma will straight up toadstool his ass if she thinks she needs to.

It’s about the performances here. Lesley Manville is great in this. A couple of months ago, I had no idea who she was, and I’ve seen two of her movies in the last couple of weeks. I’m now a dedicated fan. She’s great in both roles (Another Year was the other one), and they couldn’t be more different. Day-Lewis is, of course, as good as he can be. I don’t know that Reynolds Woodcock is one of his truly great roles, but it is a damn fine performance.

But it’s Vicky Krieps who is the star of this in my opinion. It is she who controls the movie and moves the story, and Krieps stands up against Day-Lewis in scene after scene. She’s also from Luxembourg, and that’s pretty cool.

Is it good? Sure. But I don’t know that it’s great. And it also jumps on that same never that I seem to complain about all the time. Daniel Day-Lewis is nearly twice the age of Vicky Krieps. He’s 26 years older than she is, and there’s a clear age difference in the film as well. I’m so tired of men marrying women 25 or so years younger than they are in movies. This trope needs to die off.