Blue is the Drippiest Color 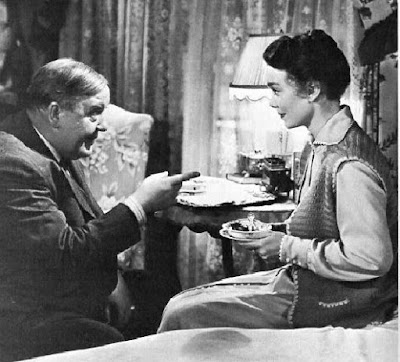 For a number of years, I’ve been under the opinion that there are some movies on the Oscar lists that I simply will not get. That still bothers me a little, but I’ve more or less learned to live with it as well as I can. That said, when one of those movies shows up, I tend to be interested. That’s what happened with The Blue Veil. This is a film that relies heavily on as much heartstring pulling as it can muster, which means we’ll be doing a deep dive into melodrama.

Louise “LouLou” Mason (Wyman, although the real star might be her makeup artist) is in the maternity ward as the film starts, but this is not a happy occasion as it turns out. We find out that in addition to already being widowed. LouLou’s child dies a few days after he is born, leaving her now completely alone. She takes a job as something akin to a nanny for Frederick K. Begley (Charles Laughton), whose wife died in childbirth. What started as a 2-week appointment is soon full time and long term.

What happens next is going to be a sort of theme in The Blue Veil. Realizing he is lonely and could do a lot worse than her, Frederick proposes and LouLou declines. Eventually, Frederick proposes to his secretary, who accepts. It’s not long after this that LouLou is forced out of the house, since there’s a new mommy in town.

The Blue Veil is going to follow this basic plot for, well, the rest of the film’s running time. LouLou is going to work for someone doing pretty much all of their child care, and then leaving or being let go for one reason or another. When she is proposed to, she decides the best way to handle it is to wait, and we never hear from the guy again. She leaves jobs because the children are too attached to her.

The big story, though, is when she ends up taking care of young Tony. This happens around the start of World War II. Tony’s father (Dan O’Herlihy) is British and is recalled for military service. When a telegram shows up, his wife Helen (Audrey Totter) heads over to England as well, leaving LouLou to care for Tony. And then…and I’m not making this up…she stays there for the next eight years, and doesn’t communicate at all with LouLou or her son for the last five years of that. She also stops sending money to take care of her son. And of course she’s going to show up and claim him, and there are going to be a lot of violins until we get to the (you knew it was coming) uplifting ending.

The problem with The Blue Veil shouldn’t be that difficult to see. It’s melodramatic in the extreme. The entire film appears to be designed specifically to make us feel like LouLou is the nanny equivalent of a saint. Everything she does, she does for the children in her charge. At one point, while caring for the daughter of a stage actress, LouLou discovers that the young girl (Natalie Wood!) has become so attached to her that she is introducing LouLou as her mother. Rather than work out the problem, LouLou essentially bolts from the family, moving on to yet another position.

Jane Wyman is the reason I watched this, and Jane Wyman is fine. I like her as an actress, but I tend to like her a lot more when she’s not in something this clearly manipulative. And don’t get it wrong—this is manipulative, and it is so on purpose. We’re supposed to feel for every moment of LouLou’s selfless journey raising other people’s kids. And at the end of the film, when she is old, we’re supposed to feel sorry for her being too old to continue the same job.

I get it. Jane Wyman was a fine actress. But The Blue Veil is sappy in the extreme, and cameos from actors like Charles Laughton and Agnes Moorehead and even longer stints from Natalie Wood and Joan Blondell do not cover for the multitude of sins that it commits.

Why to watch The Blue Veil: Jane Wyman ages gracefully.
Why not to watch: Holy crap, is this maudlin!