Film: The Mummy (1999)
Format: DVD from personal collection on The New Portable. 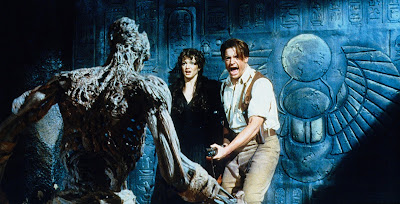 Brace yourself, folks; I’m going to get effusive here for a few minutes. I really, really like The Mummy from 1999 and I’m not ashamed of who might know it. I like how adorably gorgeous Rachel Weisz is before she got all serious and Oscar-contender-y. I love Brendan Fraser’s Doc Savage-style heroics. I love John Hannah’s smarmy charm and Kevin J. O’Connor’s weasely joy. I love just how much of a badass Arnold Vosloo is and Omid Djalili’s pitch-perfect comic relief. I love the quiet heroism of Oded Fehr and every single curmudgeonly moment of Erick Avari. The Mummy does exactly what it wants to do: it entertains from its opening moments to the close and does it just about as well as you could ever hope. If you haven’t seen this, your life is much less for it.

So yeah, I’ve just put the review up front because I’m not going to beat around the bush here. There are a lot of things I could say about The Mummy and why it shouldn’t be taken that seriously. None of that matters. The highest praise that I can give this movie is almost shocking—it reminds me of Raiders of the Lost Ark. It has the same feel of grand adventure and of supernatural danger. It has the same, wonderful sense of constant adventure and the sort of story that could have easily been serialized in 10-minute segments with a cliffhanger at the end of each one. It would not feel out of place in that sort of environment.

In ancient Egypt, high priest Imhotep (Arnold Vosloo) carries on a dangerous and illicit affair with Anck-su-Namun (Patricia Velasquez), the mistress of Pharaoh Seti I (Aharon Ipale). When Seti I finds out, Imhotep and Anck-su-Namun kill him. He flees and she kills herself, knowing that he has the spells and the power to resurrect her. Just as he does, though, Seti’s bodyguards find Imhotep. Anck-su-Namun returns to the underworld and Imhotep is forced to undergo the Hom Dai, the worst of the ancient torture/punishments. His tongue is ripped out and he is mummified alive with his sarcophagus filled with flesh-eating scarabs that devour him slowly.

Flash forward to closer to the film’s present, the years between the world wars. Rick O’Connell (Brendan Fraser) is serving in the French Foreign Legion in Egypt with his cowardly friend Beni (Kevin J. O’Connor). They are attacked in what seems to be the city of Hamunaptra, the ancient city of the dead, reputed to be filled with deadly traps and unbelievable treasure. A few years later, gambler Jonathan Carnahan (John Hannah) pickpockets O’Connell of a puzzle box and presents it to his sister Evelyn (Rachel Weisz), a librarian at an Egyptian museum. Evelyn really wants to follow in her parents’ footsteps and explore and discover, but she is charmingly clumsy and, well, a woman in the 1920s. The puzzle box might be a real find, though—it opens to reveal a map, which the pair shows to Dr. Terrence Bey (Erick Avari), who runs the museum. He accidentally-on-purpose torches the map, which purports to show the way to Hamunaptra. With the map gone, they are forced to rescue O’Connell from prison, a rescue that gets them the added baggage of the prison warden (Omid Djalili).

I’ll wrap this up quickly. Of course they make it to Hamunaptra (with a group of Americans attempting to raid the dead city as well. Beni is leading this other party), and of course once in Hamunaptra, they find the correct sarcophagus and the book that should never be read from is located and it gets read from, which is how we get our title character. In the initial stages of his resurrection, the character looks far more like the CGI creation he is; as the film continues he looks more and more like Arnold Vosloo, and he comes into his powers. One of the reasons his curse was so feared was that if he were resurrected, he would be capable of bringing back the plagues of Egypt. And, naturally, he has decided to sacrifice Evelyn to resurrect Anck-su-Namun.

The Mummy is pure joy. I suppose you can call it a horror movie, but there’s not really a great deal here that is very scary. It’s instead a rollicking adventure in that style of the old serials or Raiders. There are monsters and bad guys and danger and heroics and close calls. There are moments of humor and it’s clear from early on that O’Connell and Evelyn are going to end up together. There are even those stock characters who appear as bad guys but really aren’t. Adreth Bay (Oded Fehr) and his group attacks the treasure hunters only to prove to be people dedicated to preventing the resurrection of Imhotep and keeping anyone away from Hamunaptra.

It’s more than that, though. The Mummy is scary in the way that a carnival ride is scary. It’s far more about the thrill of the moment than any real scares. We know that most of the good guy characters are going to survive, and those who don’t will die nobly and well. We know that the bad guy characters are going to die, and probably horribly. We expect that, and when those things happen, we get the catharsis we want.

I’m going to take a moment here to talk about the great Erick Avari. I love everything about this man’s performance and the character that he plays. Terrence Bey is a man who is constantly and eternally annoyed with everything going on around him, particularly the clumsiness of Evelyn Carnahan. And how he operates is subtle. The torching of the map to Hamunaptra is clearly intentional and yet Bey passes it off as accidental but for the best. And when the chips are down, it’s Bey who makes perhaps the most noble sacrifice of anyone in the film. He’s an unsung hero, so I’m going to sing about him. I’ll be blunt here; The Mummy isn’t the sort of movie that comes at you with a serious message. It doesn’t teach you anything about yourself or the world in which you live. What it does is entertain from start to finish, and it does that really, really well.

And for the record, the first sequel is just as good.

Why to watch The Mummy: This is classic adventure in the style of Raiders of the Lost Ark or at least Romancing the Stone.
Why not to watch: Your existence is joyless.