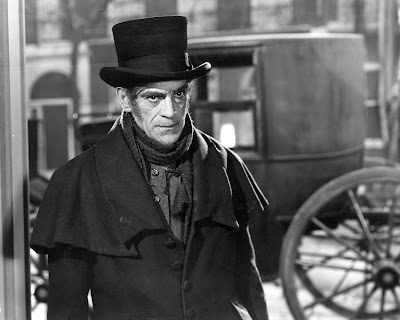 There’s something very special about the films that were produced by Val Lewton. With Lewton as the producer, a film needed to work with a negligible budget but still deliver some thrills and scares. The enduring power of Cat People and I Walked with a Zombie are indicative of just how good Lewton was at his work. The Body Snatcher is perhaps less well-known, but it comes with a hell of a solid pedigree. It’s another Karloff/Lugosi film (although Lugosi’s role is quite small and Karloff is the real star), and it was directed by no less a luminary than Robert Wise.

The Body Snatcher falls directly into the Burke and Hare realm, the snatching here being (at least initially) grave robbing for the benefit of the medical profession. We have a poor medical student named Donald Fettes (Russell Wade) who is looking to give up the practice because of financial difficulties at home. This revelation comes just after he demonstrates good bedside manner with a crippled young girl named Georgina Marsh (Sharyn Moffett). His teacher, a respected physician named Dr. MacFarlane (Henry Daniell), offers Fettes the position of being his new assistant.

It’s here where we discover the secret of the bodies that MacFarlane uses in his school. They are provided for him by John Gray (Boris Karloff), a cabman who moonlights as a resurrectionist. He’s also the cabman who brought young Georgina and her mother (Rita Corday) to see MacFarlane. Fettes isn’t happy with this arrangement and MacFarlane seems gutted by it. We discover soon enough that the reason for this is that MacFarlane had a connection to Burke and Hare, and also has a much deeper connection to John Gray than he’d like.

The Body Snatcher more or less follows two basic stories. The first is Georgina, who needs an experimental operation to be able to walk again. We also have the story of MacFarlane and John Gray and their relationship, as well as the lengths Gray will go to keep MacFarlane dancing on the end of his string. In the middle is Donald Fettes, who sees the value of medicine and the good it can bring, but also sees the high price that is paid and continues to be raised.

This is exactly why The Body Snatcher works as well as it does. Gray is a man of true menace and evil. Seeing that MacFarlane wants to slip away from his influence, he drags him deeper and deeper, making him complicit in more and more evil and larger and larger crimes. When told a new body is needed, he kills a blind street singer. MacFarlane then makes Fettes do the dissection work on her, writing the report in his own hand to make him complicit in the crime.

Bela Lugosi shows up here as MacFarlane’s assistant. He’s not in the film much; it’s actually difficult to call this a Karloff/Lugosi collaboration since the share only a single scene. Lugosi is fine for a small role. This is really Karloff’s film, though, and it’s the gleeful menace with which he approaches his role that makes the film work.

This is a solid little thriller, so I have to wonder why it doesn’t seem to have the same gravitas as other Lewton films. Why was The Seventh Victim put on the 1001 Movies list, but not this, which is every bit as good, and probably a good deal better?

If I had to guess, I would say it’s a lack of exoticism. Lewton’s best-known movies have a sense of the exotic to them. Zombie concerns Voodoo magic and takes place in the Caribbean. Cat People has the exoticism of repressed sexual urges and lycanthropy. The Body Snatcher is just about graverobbing and murder.

As always seems to be the case, this is a little shorter than I’d like, but it does tell the complete story in about 78 minutes. It’s also about as much fun as I’ve seen Karloff have on screen. He enjoyed the hell out of this role. If he didn’t, he’s the best actor to never received a Best Actor nomination, because he approaches this with gleeful malice. That’s the reason to see this—Karloff acting like he’d still the last breath from a child if it brought him half a pound sterling.

Why to watch The Body Snatcher: Karloff at his menacing best.
Why not to watch: The standards of the time make it a little too tame.