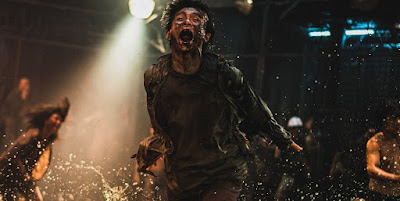 There was a time when you know what you were going to get with a sequel. You were going to get some of what you liked from the first movie, but in general, it wasn’t going to be quite as good as you wanted it to be. Then, we got some sequels that managed to at least play in the same ballpark as the original film. Movies started to follow the video game rule of being at least more than just more of the same. So, naturally, when I saw that Train to Busan had a sequel, I was interested. I honestly should have been a little worried at the title. While you can find this under the name Peninsula, the official title is Train to Busan Presents: Peninsula. That seems like a title that is trying too damn hard.

Peninsula (and this is the title I’m going to use for the rest of this review) takes place four years after Train to Busan, which is convenient, since this was released four years after Train to Busan. What we learn, from a very stilted opening interview that is made up entirely of exposition, is that Korea has been blocked off from mainland Asia. The outbreak, which evidently started in a lab, was contained to South Korea.

All of this is interspersed with shots of a family fleeing the zombie hordes. They’re heading for a boat leaving for Japan when they come across a family (who claims to be unbitten) begging for help. But off they go instead, reaching the boat. Naturally, once we’re there, we discover that someone infected has managed to get onboard, which means we’re going to have a little ship-borne zombie outbreak. In this case, the people we need to care about are marine captain Jung-seok (Dong-won Gang), his sister (So-yeon Jang), her son Dong-Hwan (Woo-jin Moon), and her husband Chul-min (Do-yoon Kim). Dong-Hwan gets bitten, his mom won’t leave, and so Jung-Seok and Chul-min survive but with a great deal of guilt.

Jump ahead to present day. Jung-Seok and Chul-Min are approached by some gangsters in Hong Kong to go back to the peninsula to find and retrieve a truck loaded with $25 million in American cash. Half goes to the gangsters, the other half is split among the survivors. Sounds like a case where we’re going to get zombies and in-fighting, right? Well, not so much. We get the truck right away. We also discover several teams of survivors.

On the one hand we have Min-jung (Jung-hyun Lee), who turns out to be the woman Jung-seok drove past four years earlier. She, her daughters, and her father have managed to survive by scavenging, and by avoiding the other survivors, Unit 631. Unit 631 is a rogue military unit under the nominal command of Captain Seo (Kyo-hwan Koo), but is rule is actively challenged by Sgt. Hwang (Min-jae Kim), who is more aggressive and who essentially counts status by how many zombies someone has killed.

So, that’s the dynamic here. Almost everyone wants the money, because money means getting off the peninsula. Sgt. Hwang appears to be happy where he is, because he has power there. And so, everyone is going to be fighting or power and position primarily rather than fighting the zombies that are literally an existential crisis for them. In a lot of respects, Peninsula feels like Land of the Dead with faster zombies and in Korea. That’s not specifically a compliment.

And that’s really it. There are people fighting over the truck and fighting over power and the double-crosses that show up seem like the sort of thing that anyone could see coming if they weren’t in the middle of a horde of zombies. It’s disappointing, because it’s a zombie movie, but it really isn’t that much of a zombie movie.

The thing that made Train to Busan so great wasn’t the plot. There wasn’t much plot to speak of, as a matter of fact. What it was was relentless. After five or ten minutes at the start, Train to Busan was a constant assault with everyone under threat constantly. It’s about 10 minutes of build up, five minutes of credits, and 105 minutes of pure chaos sandwiched between. It’s great because it doesn’t expect anything of the audience and doesn’t want to have a message. It just wants to kick some ass. Peninsula is the opposite of this. It wants to have a message, and make some sort of commentary on humanity. And while that can be interesting, it’s not what a Train to Busan sequel should be.

I felt like a lot of this was predictable, which is disappointing. Train to Busan felt original not because it really was original, but because it didn’t offer anyone time to think beyond basic survival. Train to Busan Presents: Peninsula wants to do more, and because of this, fails in terms of its expectations. I’ve seen worse, but I expected a hell of a lot better.

Why to watch Peninsula: It’s a zombie movie, so it has its moments.
Why not to watch: It’s a big step down from Train to Busan.