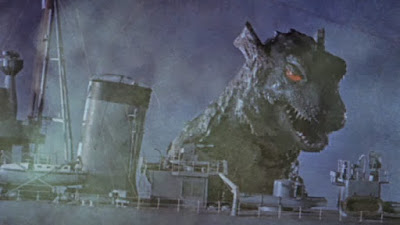 “But Steve,” I hear you say, “how can you be that dismissive? Shouldn’t you give the movie a fair shake?” Yes, and I’m not saying I didn’t give the movie a fair shake. But I am completely serious when I say that this is just a British Godzilla. It’s not a point-by-point remake, but the basic idea is the same (there’s even a monster child). Honestly, it’s more like the plot of King Kong being run with a Godzilla-like monster. Kong software on Godzilla hardware, if you like.

Joe Ryan (Bill Travers) and his friend Sam Slade (William Sylvester) are doing some deep sea treasure hunting off the Irish coast when a volcano erupts nearby, nearly capsizing their ship. They head to a nearby island, looking for the harbormaster so they can repair their ship. It is here that they mean Sean (Vincent Winter), a young orphan who is destined to become our monster child for the film. Sean is going to pair bond with Gorgo when he arrives and will be like one of those inevitably-named-Kenny kids from Gamera or whatever movies that becomes best pals with the monster that has decided to level Tokyo.

Soon enough, a creature, certainly released by the volcanic eruption, emerges from the deep. Looking for all the world like a person in a Godzilla/T-Rex costume, the creature attacks some boats and people, but is fended off by the islanders, who through torches at it (and there are a couple of great moments where there’s a burning plank in the critter’s mouth. Soon enough, Ryan and Slade are attempting to capture the creature, which they do, much to the chagrin of Sean, who is clearly bonding with the giant lizard.

Scientists come to investigate the creature, but Ryan and Slade aren’t interested in that book learnin’ stuff. No, they’ve already sold the creature to Dorkin (Martin Benson), the owner of a local circus. Dorkin dubs the monster “Gorgo” and transports it to London, because what could go wrong? Well, as it turns out the scientists do get a look at Gorgo and figure out that he’s not full grown. In fact, he’s a young infant, and they put the adult of the species at roughly 200 feet high. If you think that’s a lead-in for Gorgo’s mama to show up, well, you’ve seen a movie before, because that’s exactly what happens. The third act of the film, in addition to resolving what needs resolving, is more or less just Gorgo’s mother pulling a Godzilla-in-Tokyo routine, specifically smashing London Bridge and Westminster. It’s important to remember that in any movie of this ilk, the way to make sure that you know the destruction is real is to make sure that the most famous landmark is one that gets destroyed.

It’s probably not fair to Gorgo for me to say that I wasn’t invested in it, but I really wasn’t invested in it. I found it very difficult to care about anything happening in this movie. It feels very much like I had seen it all before multiple times, from even the few kaiju-esque movies I’ve seen. It’s hardly like I’m an expert on the subgenre, but Gorgo feels like nothing but tropes over and over again.

I’d love to tell you that I hated this movie, but that would be a lie. The truth is that the biggest characteristic of the film and the biggest letdown for me is that it’s plainly boring. Even when the monster goes on its destructive rage (it kills all of the crewmen on an RN ship), I can't help but feel like no one really cares about what is happening. Gorgo’s mom trashes the hell of of London, but you wouldn’t know that by the looks Sean gives his lizard-y pal.

The truth is that there’s really nothing here. Some treasure hunters capture a monster. A bigger version shows up and raises hell. Close curtain.

Sometimes, derivative movies or stories are fun. Gorgo has nothing to say, though, so it ultimately isn’t fun, isn’t interesting, and doesn’t much matter.

Why to watch Gorgo: Giant monster!
Why not to watch: C’mon. This is Godzilla without any of the cool parts.

Posted by SJHoneywell at 8:11 AM