My Reunion Was Arguably Worse 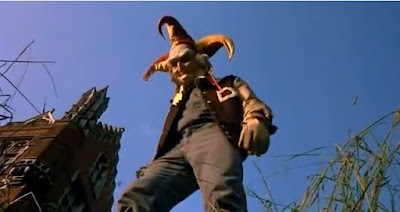 There are hierarchies in genre, I think. When it comes to horror movies, I am not a huge fan of slashers. Don’t get me wrong—a good slasher can be a great film, and there are plenty that are fantastic, but as a subgenre, slashers are the ones that feel like the lowest common denominator. So when you get a slasher that is stupid, insulting, or just mean-spirited, you’re really scraping the bottom of the barrel. And, sadly, that’s where we are with Slaughter High, a movie that starts out unbelievably cruel and proceeds to just as unbelievably ignorant.

High school nerd Marty (Simon Scudamore) is the victim of a series of cruel pranks. Promised sex by popular girl Carol (Caroline Munro), he is instead filmed naked and humiliated by his classmates. By way of “apology,” he’s offered a joint that is laced with something like ipecac, which he naturally lights up while working in a chemistry lab in school. While he’s getting sick, his main antagonist Skip (Carmine Iannaconne) puts something in his chemicals that causes a fire, because that’s evidently a funny prank. The fire causes a gigantic bottle of nitric acid to fall of a high shelf and splash on Marty, disfiguring him. Welcome to the first 20 minutes of the movie.

So with that unbelievably cruel and stupid opening, we move into the rest of the movie. Our group of antagonists from the opening are showing back up at their high school for their 10-year reunion. They find the school locked, though, but eventually break in. The place is clearly abandoned, but eventually they find their way to a classroom that contains food and alcohol…and the clear indication that they are literally the only people who have been invited. It’s also clearly evident that they’re being set up by Marty, although Skip takes credit for setting everything up.

We get a few minutes of everyone reacquainting via alcohol, pot, and cocaine, and then the murders start. One of the group (honestly, beyond Skip and Carol, they’re all interchangeable) shotguns a beer that had something in it that causes his stomach to literally explode. From this point forward, it’s standard slasher “plot” elements that lead to everyone getting picked off one or two at a time. If that were all that was going on here, I wouldn’t dislike this movie as much as I do. But it’s so much less than that in so many ways.

There are two huge problems with Slaughter High beyond the basic problem that none of these people look like high school students at the start. Most of them appear to be in their late 20s (appropriate for the second part of the film), but not a one passes for high school age at the beginning. The first major problem is the outright cruelty. The “pranks” that are pulled on Marty (it’s revealed early on that all of this takes place on April Fool’s Day) are brutal. I can just about get the first part of this being not realistic, but at least in the realm of possibility. That sort of embarrass the geek by promising sex thing is just believable enough. But screwing with someone’s chemistry experiment with clearly the intent to start a fire? These people wouldn’t be gathering for their 10th reunion—they’d be meeting up after just being released from prison.

The second problem, and it’s the really big one, is just how staggeringly stupid all of these people are. All of them would lose an argument with a piece of plastic. We can start at the beginning with Marty evidently thinking that, while conducting an experiment involving combustible material on school grounds, lighting up a spliff is the right thing to do. Couple that with putting a huge glass bottle of nitric acid on the top of a rickety shelf, and seriously, what happens to Marty is at least partially his stupid fault.

But that’s just the tip of the iceberg. All of these people go back to a clearly closed and abandoned high school and are forced to break in to find the food and drink for them…and they don’t find any of this strange or suspicious. When the first character is killed—his stomach literally explodes—another character decides it’s a great idea to take a bath in the abandoned high school. The beer that made a guy blow up doesn’t stop anyone else from continuing to drink and eat the spread in front of them. People routinely wander off on their own or leave people alone where they are easy pickings. At one point, despite there being multiple corpses around, two people go off to have sex. Bluntly, since everyone in this movie is this incredibly stupid, it’s mildly remarkable that they all managed to survive 10 years after high school without running in front of a bus or sticking a fork in an outlet.

A couple of the deaths are funny or interesting. There’s nothing else worth looking at here. This movie is not just bad, it’s the sort of film that makes me angry and embarrassed to be a horror fan.

Why to watch Slaughter High: You’ve had half of your brain removed.
Why not to watch: It’s garbage. p>