Film: Ready or Not
Format: DVD from Sycamore Public Library on basement television. 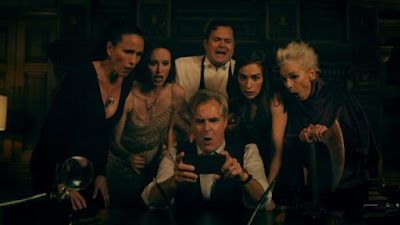 A lot of people recommended Ready or Not to me, so when I saw it on the New Arrival shelf at one of the local libraries I use, I figured I should grab it. I’m not surprised that this library had it; they have a fantastic movie collection, something well north of 5000 discs. I go at least once a week just to see what new has arrived.

Ready or Not is classified as a horror-comedy and it sort of is. It’s definitely a horror movie and it very much has some comedic elements, but there are parts of this that are absolutely deadly serious. There’s also a specific moment in this that is—without guts, grue, or hitting any of my specific triggers—one of the most stomach-turning moments I’ve seen in a movie in a long time. This is not a complaint. It’s just a statement of fact.

We open as a man is running through a house. He asks for help from a young child, who shouts to others the man’s location. The man is shot with a spear gun by someone wearing a mask and is then dragged off. We are given no explanation for this, which is not a surprise. After all, the rest of the movie serves as the explanation.

We jump ahead a few decades. Grace (Samara Weaving) is about to marry into the astonishingly wealthy Le Domas family, who have had a generations-long dynasty in the game industry. Not the gaming industry—the Le Domas family doesn’t do anything as crass as casinos. No, their fortune started with playing cards, moved into board games, and now (we discover) includes professional sports teams. Multiple professional sports teams. They’re top 1% of the 1% money, and Grace is definitely out of her element. However, she is willing to make things work with her husband-to-be Alex (Mark O’Brian). Alex has more or less disappeared from the family, and this wedding is potentially bringing him back into the fold. Everyone is naturally a little suspicious of Grace’s motives, thinking her a gold digger.

The marriage goes off without a hitch. Grace discovers that, as a new member of the family, she will be forced to play a game at midnight. She doesn’t specifically have to win, she just has to play. She’s told the story of the family fortune, which began when an ancestor met a man named Mr. Le Bail on a sea voyage. He ultimately financed the patriarch of the Le Domas family and also made a strange demand—the ritual in question. The new family member draws a card from the box given to the family by Le Bail and has to play. Other members who married into the family played (we’re told) chess and Old Maid. Grace draws a card and gets hide and seek.

And this is where the movie turns. It turns out that hide and seek is the one really, really bad card that can be drawn from the deck. Most games are just games that need to be played. Hide and seek, though, means that the new member of the family is destined to become a sacrifice. The family has to hunt the new member down, incapacitate her (or him, as the case may be) and sacrifice that person in a ritual to Mr. Le Bail. If they fail, the whole family dies. It doesn’t take too much work to figure out that “Le Bail” is an anagram for “Belial.”

And that’s the rest of the movie, more or less. Grace does what she can to stay one step ahead of the Le Domas family, who don’t even give her the knowledge that she is playing for her life. She discovers this when one of the Le Domas brood kills one of the maids accidentally. Grace deals with the homicidal tendencies of the Le Domas family, her new husband’s attempts to rescue her and the sudden realization that her new brother-in-law Daniel (Adam Brody) might possibly be ready for the family line to die out. Maybe. Opposed to him in that is the just-a-little-too-into-the-family-tradition Aunt Helene (Nicky Guadagni, who is probably the most terrifying person in the movie, but gives the best performance next to Samara Weaving).

Ready or Not does just about everything right. This could have very easily been a very standard “innocent person trapped with a crazy family” movie, but it wants to be more and succeeds in being more. There are a couple of moments that move this from Most Dangerous Game knock off to something a lot wittier and better than just a new take on an old classic. I want to talk about my favorite, but I’ll do it under a spoiler tag.

Daniel is confronted by his cocaine-addicted sister Emilie (Melaine Scrofano) about what will happen if Grace makes it to dawn. Daniel appears to be of the opinion that maybe the world would be better without the Le Domas family—that they all deserve to die. Emilie makes the argument that her children don’t. The two then discover her son Georgie (Liam MacDonald) who tells them that he shot Grace in the hand and was trying to help them kill her. Turns out the kids probably deserve the same fate as well.

I genuinely enjoyed this. I expected to like it based on what people told me, but I didn’t expect to like it this much. It’s also one of the rare instances where I wasn’t immediately turned off by the presence of Andie MacDowell.

Why to watch Ready or Not: It’s a lot more fun than you think it’s going to be.
Why not to watch: I’ve got nothing—this hits on all cylinders.

Posted by SJHoneywell at 8:39 PM