The Louder the Better? 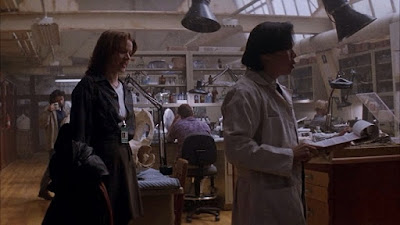 Sometimes I dread writing these reviews. It’s great when I feel like there’s a lot to say about a movie, and most of the time, that’s most movies. There’s almost always something worth picking apart or getting into. With The Relic, I feel like there’s not a hell of a lot to talk about. There’s a very basic monster plot, we have good guy and bad guy scientists, there are a few gruesome deaths and a few unexplained deaths, and there are some Stan Winston creature effects. And, after well over 100 minutes, the credits finally roll.

We start with a scientist (Lewis Van Bergen) undergoing a ritual with a South American native tribe. Something goes wrong for the scientist, at least we believe, when he tries to retrieve what he is shipping back to his museum in Chicago turns out to not be on the ship. Jump cut to Chicago about six weeks later, the ship evidently having gone directly from the Amazon rain forest up through the Gulf of Mexico and up the Mississippi River to Lake Michigan (in the original novel, the ship docks in New York) to reveal a dead crew, many of whom have their heads discovered in the ship’s bilge.

Meanwhile, at the Field Museum (seriously, a great museum if you’re ever in Chicago with a spare day), infighting between our film’s protagonist, evolutionary biologist Margo Green (Penelope Ann Miller) and fellow scientist Greg Lee (Chi Muoi Lo) are fighting over who will get a particular research grant—one that Green needs and Lee simply wants. The crate from our scientist in the film’s opening shows up with some native sculpture of a legendary monstrous creature and some leaves with a weird DNA-altering fungus on them. Naturally, the science-minded and ethically pure Dr. Green is going to get wrapped up in studying this previously unknown fungus while bad scientist Dr. Lee is schmoozing the rich folks in charge of the grant money at a reception that evening.

So look, at this point, I’ve pretty much handed you everything you need to figure this out. I haven’t mentioned Dr. Green’s mentor (played by James Whitmore), the police detective trying to figure out what is happening (Tom Sizemore), or the museum executive who is awesome specifically because she is played by Linda Hunt. But regardless of those characters, you have everything you need here to figure out exactly what is happening. You’ve got a missing scientist in trouble, a DNA-altering fungus, a bunch of murdered men on a ship, and a giant gala about to happen in a museum, where some things have mysteriously arrived, and where the troubled scientist was working. Do the math here.

The problems with The Relic are not that the plot is obvious or easy to figure out. I mean, the minute I knew that there was a creature roaming the Field Museum, I figured out exactly what the source of that creature was. But that doesn’t really matter that much to me. I like being surprised by a plot, but an obvious plot can still work if the movie itself is done well. If the characters are compelling, if the action is good, and if the scares are genuine, I’m fine with watching a movie when I already know the broad strokes.

No, the problems with The Relic run a lot deeper. The biggest problem is that director Peter Hyams, whose work is admittedly hit-or-miss, really missed on this one in two major areas: the sound and the lighting. Sure, there are other people specifically in charge of those areas, but we have to give Hyams the ultimate responsibility. The Relic is loud in places. I couldn’t find a good place to put the volume. If I was able to hear the dialogue, my wife, a solid wall away and wearing headphones, complained about the noise of the action scenes. If I toned the action scenes down, I couldn’t hear the dialogue.

Worse, The Relic was completely unable to get the lighting right. Many of the scenes seemed completely black. It was hard to follow what was happening—lots of shouting and screaming and flailing around in mostly dark areas just ends up leaving me confused.

So yes, that’s the failing of The Relic. In a movie where I could legitimately figure out most of the plot less than halfway through, I couldn’t figure out the specifics of what was happening because of the sound and the lighting. Honestly, that’s not a good look, and while it can be disconcerting and off-putting, noise and darkness doesn’t qualify as scary, at least to me.

Why to watch The Relic: The Field Museum is cool.
Why not to watch: “Loud and dark” does not equal scary.