Going Out for Italian 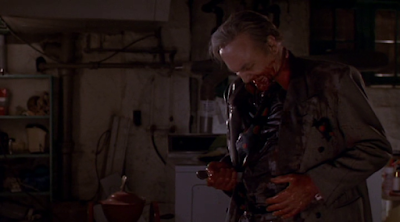 Of all of the basic monster types, vampires are probably the ones who have the most movies about them. Most of them make a few changes to the basic idea of vampire lore, anatomy, or what have you, but they all follow the basics. One thing that a lot of vampire movies have in common is the existential dread that vampires seem to feel about being predators. While there’s a little of that in Innocent Blood (also known by the awesome title of A French Vampire in America), the film does away with a lot of that by having the main prey of the vampires be the criminal underworld.

That right there would set apart Innocent Blood from virtually every other vampire movie going. Our bloodsucker, a French vampire named Marie (Anne Parillaud), survives specifically by preying on the worst elements of society. As the film begins, we find ourselves dealing with the mob. She overlooks a potential meal in Joe Gennaro (Anthony LaPaglia) and settles instead on another crime figure (Chazz Palminteri). When she’s done feeding, she shoots the mobster in the face to prevent him from coming back.

The next morning, Gennaro shows up at the crime scene, which blows his cover as an undercover cop. As for Marie, she decides to continue, as she says “having Italian” and winds up going after local mob boss Sallie “The Shark” Macelli (Robert Loggia). Unfortunately for her, she doesn’t complete the job and Sallie soon rises as a vampire himself. Once he figures out what is going on, he starts killing and reanimating his crew, starting with his lawyer (Don Rickles). He also decides that it’s time to deal with Gennaro, once a member of his crew, now outed as an undercover cop.

That’s really the plot here. A French vampire and an undercover cop fight the mob, who are themselves becoming vampires with a plan of taking over the city—Pittsburgh in this case. Along the way, we’re naturally going to get a romance and a bit of nudity (because of course we are). This was the early ‘90s, after all, and any mob/undercover cop movie worth its salt and wanting to be played on Cinemax needed a scene in a strip club.

There’s a lot to like with Innocent Blood. We can start with the cast. Along with the people already mentioned, we’re going to run into Frank Oz as a coroner, Luis Guzman as a cop, Sam Raimi as a meat plant employee, Kim Coates as a gangster, and Angela Bassett as the local state’s attorney. There’s even a short appearance by scream queen Linnea Quigley as a nurse. The cast just never stops.

There are also some really interesting adaptations to the vampire mythos for this film. A lot of the vampire strengths and weaknesses are still here. Marie, for instance, is repulsed by a plate of mussels with garlic. She’s ridiculously strong. But she doesn’t seem to be able to hypnotize people or transform herself into a bat. She is incredibly fast, though. Interestingly, the vampires in Innocent Blood seem to have some of the weaknesses of zombies. These vampires don’t need to be killed by sunlight (although it works) or a stake through the heart (which never happens, so it doesn’t come up). They are regularly killed by a bullet to the head, though, and Marie offs a few bloodsuckers by just snapping their necks.

I would have liked a little more exploration into the differences of the vampires of this movie and the traditional vampires, but I think that would have required a sequel. As it is, a lot of Innocent Blood is spent more or less setting up the plot and dealing with the criminal underworld elements of the story. It’s not a weakness, though—this really does work for the story being told. While the vampires are clearly important here, it really wants to give us the romance between Marie and Joe as well as giving us enough information on the mob to have us invested in it being taken down.

I enjoyed this a great deal. There’s not a lot of gore here, but there is a substantial amount of blood. It is, after all, a horror movie at its heart.

I’m honestly disappointed that I had to find this online. This should be a lot easier to find. It should also have a dedicated fan base as well as at least one sequel.

Why to watch Innocent Blood: A fun take on vampires.
Why not to watch: No good reason, really.