Film: The Raven
Format: DVD from Sycamore Public Library on the new portable. 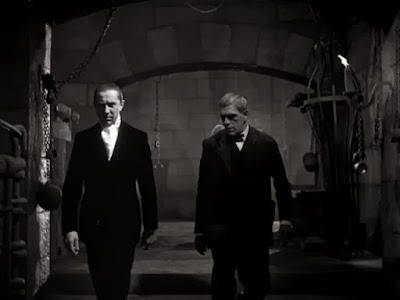 While I like a lot of modern horror movies (when they aren’t just gratuitously gory), there’s a part of me that truly loves the old school stuff. The Raven is from 1935 and features both Bela Lugosi and Boris Karloff, so it’s very much in that wheelhouse. It’s also a movie that manages to offer only a very tangential connection to its source material. The connections are that one character likes Poe a lot and at one point there is an interpretive dance while someone reads the poem. No, really.

We start with a car accident. Jean Thatcher (Irene Ware) crashes her car and lies at the brink of death. Her father (Samuel S. Hinds) pleads with noted but retired doctor Richard Vollin (Bela Lugosi) to come out of retirement to save his daughter. Vollin is eventually persuaded to do so, and naturally his skill is what pulls Jean through. Shortly thereafter, Jean performs the aforementioned interpretive Raven dance.

We also learn a couple of important things. Jean feels beholden to Dr. Vollin for saving her life. For his part, Vollin, despite being more than twice her age, naturally becomes obsessed with Jean in the classic Gothic horror movie trope. Jean’s father disapproves, of course, and is insistent that Jean will marry Jerry Halden (Lester Matthews). We also learn that Vollin is obsessed with Poe, claiming the raven as his personal talisman and (of course) building a collection of Poe-inspired torture devices in a secret dungeon behind a rotating wall in his house. Of course he has a secret dungeon with a rotating wall behind a bookcase.

Enter the massive turn of the plot. An escaped murderer named Edmond Bateman (Boris Karloff) appears at Vollin’s house, insistent that Vollin can give him a new face. Vollin agrees, but forces a condition on the desperate man—kill off the people surrounding Jean so that Vollin can marry her. Bateman, murderer though he be, is not depraved and refuses. Vollin agrees to the surgery anyway, but intentionally botches it, ruining half of Bateman’s face, and then promising that he will restore him once the murders are complete. Bateman agrees, and Vollin holds a dinner party for everyone he wants to bump off. Attempted murder and hilarity ensue.

Like most of the Universal horror movies of the 1930s, whether based on a classic story or tangentially attached to one like this (there’s a few other Poe references here, most obviously The Pit and the Pendulum), The Raven is far too short. This clocks in at 61 minutes, not all the way through the second act of a movie of more traditional length. It ends just as it’s starting to get potentially interesting.

It’s also slow moving. Things don’t really get interesting (interpretive dance notwithstanding) until Karloff shows up and gets his face messed up. The makeup on Karloff’s face is particularly interesting. To a modern audience, it’s clearly a cosmetic effect and clearly a bit wonky and almost papier-mâché in appearance, but it had to be really disturbing and upsetting for a typical audience in 1935. It’s fun, but it takes us too long to get there for a movie that has the same running time as an episode of Breaking Bad with a potty break.

As always, the interplay between Karloff and Lugosi is the most fun of the film. It’s another case where Karloff plays the “monster” character while Lugosi plays the true evil of the film. Both of them appear to be having a pretty good time with it. It’s Lugosi who is chewing the scenery, as normal, and it’s Karloff who offers the performance that is most sympathetic.

I enjoyed The Raven pretty well, but it’s hard to think that this is a movie that really needs more than a single viewing. There’s not enough here to warrant going back to this a second time, and aside from the two clear stars, there’s no one else here that’s really that memorable.