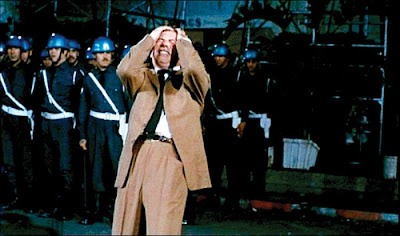 Like most people, I have political views. You might agree with none, a few, some, most, or all of them. Since this is a movie blog, though, my political views really don’t matter when it comes to the movies I’m watching. I try to keep my politics out of my writing here. However, a film like Z is all about the politics. It’s impossible to get anywhere close to this film without getting into politics.

Z also contains the strangest anti-disclaimer I have ever seen. Before the actual start of the movie, text appears that reads, “Any resemblance to actual events, to persons living or dead, is not the result of chance. It is DELIBERATE.” It is. The film is essentially a real story of Greek doctor and liberal Gregoris Lambrakis, who was assassinated in 1963. It’s never overtly stated where this film takes place, but the soundtrack has a definite Grecian flair, and there are other minor hints (Greek beer, etc.) throughout.

Despite its basis in reality, much of the film appears to be allegorical. The characters, for instance, don’t really have names. The character representing Labrakis (played by Yves Montand) is called simply “the doctor” throughout the film. He is a peace advocate, or more specifically, an advocate for nuclear disarmament. His opposition have painted him and those who agree with him as communists, and it’s entirely possible that they are. This is never really explored.

His position is evidently controversial, though, because whenever he goes anywhere, he has a group of followers as well as a group of anti-demonstrators who quickly become violent. The government is decidedly against him, as is evidenced by the subtle low-grade harassment and problems experienced by the group. They’ve planned a rally, but the owner of the hall they plan to use cancels on them, evidently strong-armed by someone else. Nowhere else is cited as being up to code. Eventually, they find a place and the rally goes off, but there is seating for only 200 instead of the 3-4000 expected.

As a remedy, the organization hangs speakers outside to let those who couldn’t get in hear. This is relatively peaceful, except for those who oppose the doctor. They cause problems, and the police in the area stand by passively. When the speech is over, the doctor is attacked by two men in a small truck. He’s beaten over the head with a club, and the perpetrators drive off, unmolested by the police. The doctor, ultimately, dies of the wound.

Throughout, we follow the story of two critical men in this piece. The first is a photojournalist (Jacques Perrin) who is looking to get to the bottom of the story. The other is the official judge of the case (Jean-Louis Trintignant), who must attempt to bring order from the chaos. Even here, the official government position is that nothing really terrible has happened. The judge is encouraged to find a solution to what happened that will shed a positive, or at least neutral, light on the events.

What sadly doesn’t come as a shock here is the blatant lying, hiding from the truth, hedging, and general bad behavior of the government. They claim to be acting in the interests of the country, and not only constantly shut down the freedoms of their own people, they go out of their way to make obviously false conclusions about every aspect of this case. It soon becomes evident that the government, or at least elements of it, have done more here than simply cover things up.

It’s eye opening. More importantly, it’s still incredibly relevant. One doesn’t need to look any further than a particular news network to see this exact kind of action happening on a daily, regular basis. This is politics from the 60s and in Greece, but it functions here exactly like politics today in the U.S. Cover ups, bad behavior, and most importantly willful lying, often with complicit news outlets fostering the lies and covering up the truth. This is someone claiming to have not raided the cookie jar while brushing crumbs of his or her lapels, and doing so on a national scale, and doing it simply for the sake of retaining power.

Z is a masterful film, controversial because those who claim to love freedom and then act in ways to curtail it may find it hitting too close to home. Free speech was made for films like this one, and films like this one are the most important reason that speech needs to stay free. The ending, while inevitable, is brilliant, shocking, realistic, sad, and overwhelming

The title comes from the fact that, in Greek, "Z" is symbolic for "he still lives." He does, but here, as it often seems in our own time and in this country, he is on life support and fading.

Why to watch Z: The best political thriller ever made.
Why not to watch: If your political views are extreme, you may find this movie difficult to watch.
Posted by SJHoneywell at 11:23 PM