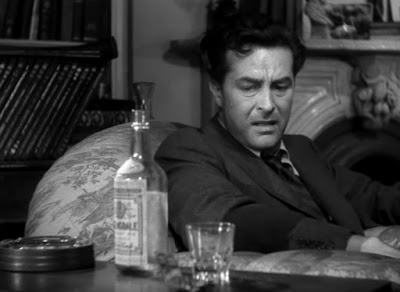 Some of the greatest movies almost don’t get made. Billy Wilder’s The Lost Weekend is such a film. Since the film paints such a bleak picture of alcoholism, the liquor industry allegedly offered Paramount $5 million (and that’s 1945 dollars) to suppress the film. Wilder claims that if they’d offered him the money, he’d have taken it and the film would never have seen the light of day. Another story about the film is that Wilder predicted that Ray Milland would win an Oscar for his role as the alcoholic failed writer Don Birnam, a prediction that proved true.

Addiction is a difficult subject to treat honestly without becoming ridiculous or maudlin. It’s worth noting that at the time The Lost Weekend was filmed, there were a number of entertainers who made their living either by being or feigning near-constant drunkenness. Alcoholism was less of a problem in 1945, at least in terms of perception. Certainly everyone knew someone who hit the bottle too hard and too often, but it wasn’t thought of as nearly the problem it is seen as today.

As mentioned already, Ray Milland is at the center of this film as Don Birnam. Birnam was a hot-shot writer in college and even sold a story to the Atlantic Monthly. Based on that success, he dropped out of school and moved to New York, where his creativity folded under the pressure. He succumbed to the lure of the bottle. When drinking, he tells the local bartender Nat (Howard Da Silva), he can see an entire novel in his head, but when the alcohol fades, so too does the vision. Then he needs another drink to recover from the depression, then another drink to recover from that drink.

Seeing him through this, standing by him as much as possible are his brother Wick (Phillip Terry), who pays his bills and, in today’s parlance enables him, and Helen St. James (Jane Wyman), Don’s girlfriend. Wick has had his fill of Don, but Helen still loves him and is willing to stand by him despite the fact that he’ll do anything to roll himself off the wagon.

A number of images certainly resonate in this film and are difficult to forget. Don’s hospitalization at Bellevue, his attempted theft of a purse at a club to pay for his drinks, his delirium tremens, the frantic search through his apartment for the bottle he’s hidden, his desperation leading him to the arms (and purse) of bar floozy Gloria (Doris Dowling) all are remarkable for their intensity and poignancy. However, it is the image of Don walking down the streets of New York, desperately looking for a pawn shop so he can hock his typewriter for a few cheap bottles of rye that remains indelibly etched in memory.

To claim that this film is specifically and only about alcoholism or addiction, though, is to sell it dramatically short. There is far more here than just Don Birnam’s love of cheap rye. His addiction comes not only from his love of booze, but from fear. He claims to drink because the drink is what allows him to write, but he doesn’t write at all. In fact, he drinks to prevent himself from writing. If he does write, it might be terrible, like the last few things he’s tried to work on. If he doesn’t write, he can claim that he is loaded with untapped potential. Writing equals failure, because actually writing means he is risking being bad at writing.

This is a film that should be forced on anyone coming of drinking age. Despite its age and what could and could not be shown in a film in 1945, it is still incredibly affecting and powerful. Don Birnam’s night in Bellevue has a surreal, terrifying quality to it, even now in an age where directors are willing and able to show everything and leave nothing to the imagination.

It’s also worth noting that this is the first time a Theremin was used on a film soundtrack. In the next decade especially, it became a staple for science fiction films wanting to add an eerie, otherworldly quality to its atmosphere. Here, it’s used to highlight Don’s delirium and his warped sense of the world when he’s crawled inside another bottle.

Ultimately, it’s almost impossible to root for Don, and yet equally impossible to not feel a certain empathy for him. There but for the grace, and all of that. Don Birnam is a lesson, a picture of tragedy, and a worst case scenario. This is not a film that anyone, once having seen it, can forget.

If anything, I could live without the ending. Understandable, given the time the film was made, but hardly the ending that strikes a note of reality.

Why to watch The Lost Weekend: The greatest cinematic depiction of addiction ever made.
Why not to watch: Hollywood always gets its ending.
Posted by SJHoneywell at 3:15 PM