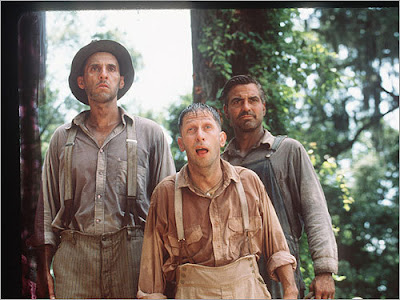 When I think of the directors I really like, there are a handful who, as far as I’ve seen, can do almost nothing wrong. Scorsese hits on all cylinders most of the time, as does Guillermo del Toro, Danny Boyle, Hitchcock, and a few others. There are few I love as much as the Coen Brothers, though. Joel and Ethan Coen know what they’re doing. They write well, direct well, produce well, and make me damn happy.

What I find interesting about the Coens is that they are equally at home with drama and comedy. Their first movie, Blood Simple, is one of the great debuts in movie history. In the same vein, they created Miller’s Crossing and No Country for Old Men. Comedy-wise, there’s The Hudsucker Proxy, Burn After Reading, The Big Lebowski, and these two films. In between, there’s Fargo.

Just as many directors have muses, so too do the Coens. A lot of the same people turn up over and over in their films. John Turturro, John Goodman, Holly Hunter, Francis McDormand, and others seem to keep showing up over and over in Coen films. There has to be some particular joy for an actor knowing that one of the best directors going likes having you around and continues to write great parts for you.

O Brother Where Art Thou is essentially a retelling of The Odyssey to the point that Homer is given partial writing credit for the film. We have a trio of ne’er-do-wells who have escaped from a prison chain gang. The leader is Ulysses Everett McGill (George Clooney), a slick talking, educated man with a penchant for complex sentences and advanced vocabulary. Accompanying him are Delmar (Tim Blake Nelson) and Pete (John Turturro). They go with Everett because they’re chained to him, and because he promises them a third share of $1.2 million from an armed car robbery. However, they need to get to where it was buried quickly because a new dam is being built, and the land will soon be covered by a manmade lake.

Along the way, the three meet up with characters of all stripes and deal with terrible odds preventing their success. All of this is predicted by a blind man on a handcart who tells them they will find a great treasure, but not the one they seek, a reference to the blind poet Homer. They meet with sirens, who spirit Pete away, a cyclops in the form of Big Dan Teague (John Goodman), see the murder of innocent livestock as with the slaughter of the cattle of Helios (here at the hands of Babyface Nelson, played by Michael Badalucco) and more. Even Circe is referenced when Delmar is convinced that Pete has been transformed into a toad.

The big reference, though is Everett’s wife Penny (Odysseus’s wife was named Penelope). She’s set to marry another man, which is the real reason Everett broke out of prison in the first place. Just as Penelope fended off suitors until her husband returned and proved himself, Everett must prove himself a man in her eyes to prevent her marriage. He does this because of a chance of fate. A meeting with a young man at a crossroads and a desire for instant cash turn the three with their new friend Tommy (Chris Thomas King) into The Soggy Bottom Boys, the hottest singing act to ever hit Mississippi.

There are great cameos littered through this film as well. Stephen Root plays the man who first records the Soggy Bottom Boys. Charles Durning shows up as the governor of Mississippi. The underrated and virtually unknown Daniel von Bargen (you’ll know him the minute you see him) plays the evil pursuing sheriff dedicated to finding and killing Everett and his friends, essentially acting as Poseidon in his wrath against Odysseus.

Here’s the thing: even without all of the references to Homer’s work, this is a great movie. It’s perfectly possible to enjoy the hell out of this movie without knowing anything about classic Greek literature. It’s also worth noting that this is the first time in a long time I’ve had any desire to go out and purchase a movie soundtrack. It’s that good all the way through. 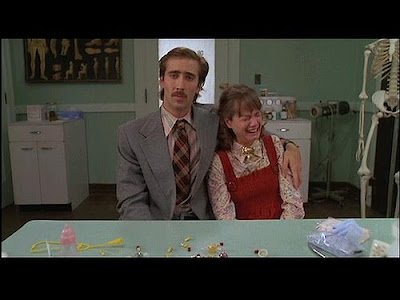 Raising Arizona was my first encounter with the Coens as a director/producer team (Joel Coen was the assistant editor on The Evil Dead). Despite multiple viewings, I still love this movie, and it still kills me every time I watch it. Of all the Coen films, this one is the most quotable, the one filled with lines that seem suitable in a variety of situations.

H.I. “Hi” McDunnough (Nicolas Cage) is a small-time crook constantly arrested for armed robbery. He’s only technically armed, though; there’s never any ammunition in the gun. Every time he is picked up, he’s photographed by Edwina (Holly Hunter), whose conversation with him consists of a shouted “Turn to the right!” Eventually, Hi confesses his love for her, and when he’s released again, the two are married. They move into a trailer and await the coming of children.

Sadly, Ed is barren. At the same time, a local unpainted furniture magnate named Nathan Arizona (Trey Wilson) and his wife are blessed with quintuplets. Ed wants a baby, and since Hi has a criminal past, she convinces him that the only thing to do is to sneak into the Arizona mansion and steal one of the babies so they can raise it as their own.

The problem is that everyone wants the baby. Two of Hi’s prison friends break out and visit the couple. Gale (John Goodman) and Evelle (William Forsythe) want the child for their own. So too do Glen (Sam McMurray) and Dot (Frances McDormand), who know the real identity of the child and threaten to turn Ed and Hi in if they don’t get the baby. Arizona wants his child back and hires Leonard Smalls (Tex Cobb), a rough and dirty assassin on a Harley, to get the child back at all costs.

And so, it’s a comedy of errors. Hi and Ed do everything they can to make their lives happy with a child, and at every turn, everyone they encounter wants to take the child away from them. Of course, the child isn’t theirs to begin with (although as Hi says after the kidnapping, he got a good one). This leads to more theft, another convenience store robbery, more kidnappings, chases, fights, and an explosion or two.

It also leads to a tremendous amount of hick philosophizing from Hi in the form of voice over. It’s these in general that kill me. Some of the comments are staggeringly funny and are certainly meant to be, but for the characters in the film, they are said in all earnestness. Hi is sincere when he complains that Edwina is a rocky place where his seed could not find purchase, and when he does this, it renders me incapacitated with laughter.

I don’t usually like Nicolas Cage. He tends to overact and he also tends to make really crappy movies. His output for a great deal of his career has consisted of overblown action films short on plot and far too long on budget. He could be better as this film proves, but he typically isn’t. It makes me sad that someone could be producing great work over and over again—he’s made other movies worth watching—but instead makes crap that’s not worth the popcorn I spill when walking out. Do better, Cage. Make the Coens want to work with you again.

Why to watch O Brother Where Art Thou: A modern classic, and a classic brought to modern times.
Why not to watch: You can’t get beyond the bluegrass.

Why to watch Raising Arizona: The funniest thing the Coens ever did.
Why not to watch: It’s hard to believe that Nicolas Cage didn’t always suck really hard.
Posted by SJHoneywell at 11:56 PM