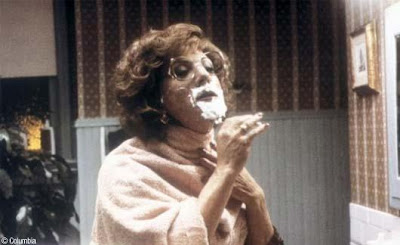 Tootsie is the story of an out-of-work actor named Michael Dorsey (Hoffman) who is told by his agent (director Sydney Pollack) that no one in New York and no one in Hollywood will work with him. Michael is a good actor, perhaps even a great one, but he’s also impossible to work with. If a stage director tells him to do something he doesn’t agree with, he walks off the stage.

Michael lives with a tortured playwright named Jeff Slater (Bill Murray). He teaches acting classes, and sometimes flirts with one of his students, Sandy Lester (Teri Garr). He also works as a waiter, the traditional job of the struggling actor. While he can’t get work himself, he does encourage others, and he helps Sandy try to land a job, which she doesn’t get. Desperate for work, Michael transforms himself from Michael Dorsey into Dorothy Michaels, a aging Southern belle and, in something of a shock to the soap opera director he will be working for (Dabney Coleman), he lands the part. Here he encounters the often nearly-nude April (Geena Davis), the aging, perpetually horny, and vaguely stupid soap star John Van Horn (George Gaynes), and fellow actress Julie Nichols (Jessica Lange).

Dorothy is an immediate sensation, both on the soap and suddenly in the world in general. But for Michael, the trouble is only starting. While his professional career is suddenly soaring in a way he couldn’t have expected, he also can’t tell anyone about it. Julie becomes quite close with Dorothy, inviting “her” to the family farm, where Dorothy meets Les (American treasure Charles Durning), Julie’s father. Les is immediately attracted to Dorothy, which makes Michael’s life complicated.

Tootsie is deceptively layered for a film that appears to be little more than a gender-bending comedy. Dorothy’s troubles with Les, Ron the director, and John Van Horn are funny and make for some great moments. One of the funniest scenes is when Michael is waiting for Sandy to get out of the shower. He sneaks into her bedroom, sees her clothing, and begins to wonder how certain outfits might look on Dorothy. When she comes out of the shower and finds him nearly nude, her mind goes one way, and he allows it to go that way. It’s got to be the only time in film history that a man agrees to sex simply because he doesn’t want the woman to know he’s a cross-dresser, although again, I’ve never seen every film produced by Ed Wood.

The depth here comes with Michael’s struggle as Dorothy. He’s a good enough actor (Michael, not Hoffman, although Hoffman is obviously a damn fine actor to be able to pull this off) that he immediately sympathizes with Dorothy’s plight. Treated as an object by her director and as something to be pawed by John, Dorothy manages to stand up for herself as Dorothy, not as Michael coming through Dorothy. In that moment at least, Michael is her, and it’s a great scene.

Additionally, for a comedy—and there are plenty of comic moments—there are also some real tender ones, and ones that strike at serious issues. We discover mid-way through the film that Julie is an unwed mother, and that she is having an affair with Ron despite the fact that he treats her shabbily. Again, for a comedy, there is an undercurrent here about the way women are treated, specifically in an acting environment, but in general as well.

Tootsie hasn’t aged as well as it could have, which is a shame. Despite this, it’s still a great film and worth watching. If I could change one thing about it, I’d add more of Bill Murray. He’s great in every scene he’s in. Murray was just at the start of a brilliant film career when this film was made. He could have easily demanded top billing in 1982, considering he’d just made Caddyshack and Stripes. That he took a small role in a great film like this speaks well of his choices. 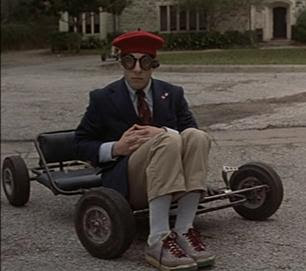 Murray takes almost center stage in Wes Anderson’s Rushmore, which is very much The Royal Tennenbaums before The Royal Tennenbaums. Anderson’s films are not weird enough to be called weird and too quirky to be called quirky. They are their own thing, unique in film. I can generally tell a Wes Anderson film by the feel. His characters are fully realized, perhaps even too realized to be truly believed. Each is an extreme caricature, an extreme personality who lives in a very particularly realized world. Murray plays disaffected, disgruntled, and dissatisfied Herman Blume, a steel magnate who sends his spoiled and completely nasty twin sons to Rushmore Academy. Also attending Rushmore is Max Fischer (Jason Schwartzman), who is so filled with quirks it seems as if there is no room for a real personality.

Max loves Rushmore. In a very Wes Anderson montage, we are alerted to all of his extra-curricular activities, and the list is endless, extreme, and varied. Max is, for instance, in charge of his own theater company, is learning to fly airplanes, he fences, he edits the yearbook, and belongs to virtually every club that exists. If a club doesn’t exist, he starts it. Because of this, he also tends to fail his classes and is placed on “sudden death probation” by school headmaster Dr. Nelson Guggenheim (the truly wonderful Brian Cox). If he fails another class, he’s out.

Max discovers two important people at the start of the film. The first is Herman, who offers a strange homily at the school mass, a speech that seems to affect Max deeply. He also encounters Rosemary Cross (Olivia Williams), a first grade teacher with whom he becomes immediately infatuated. Discovering that she has several fish tanks in her classroom, Max takes it upon himself to get an aquarium built for the school in her honor, and goes to Herman Blume to help him. What Max doesn’t realize is that Herman’s marriage is a sham at best, and he too develops an immediate and powerful attraction to the young teacher. And so, we have an early May-late May-December romantic triangle.

While the triangle takes up much of the story here, Schwartzman and Murray are the heart of this film. Herman deeply admires Max’s enthusiasm and his inability to doubt himself in anything. Max is as deeply idealistic and as easily hurt as any intelligent, overachieving 15-year-old can be, and needs the support of a man like Blume. His own father (played by Seymour Cassel) tries, but Max is embarrassed that his father is a mere barber and not something world changing and important. In short, for all of his quirks, Max couldn’t be more typical. Sadly for the both of them, their rivalry for the affections of Rosemary takes some serious turns as they do everything they can to destroy each other. It's petty, it's silly, and it's funny.

Rushmore is strangely endearing. I love Wes Anderson’s movies because I love his characters. I can also see that there are many people who will find this film infuriating and aggravating. Schwartzman was only 18 when this film was made, and he gives a performance worthy of someone with that many years of experience. And while he is the Energizer Bunny of this film, it is Murray who becomes and remains its emotional heart as a man who has everything, but nothing he wants.

Why to watch Tootsie: Hoffman is doubly likeable when he plays two roles.
Why not to watch: Hoffman in lipstick.

Why to watch Rushmore: Pathos, delivered in Wes Anderson’s signature style
Why not to watch: Quirk overload.
Posted by SJHoneywell at 11:56 PM