Film: Into the Wild
Format: DVD from Rockford Public Library on laptop. 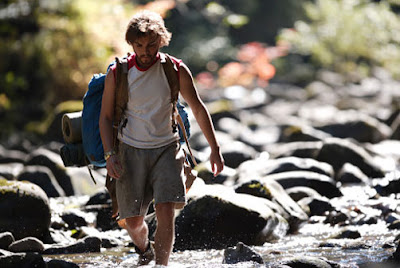 The thing that everyone wants to do, and that might well be the most difficult thing in the world to actually do, is follow a dream. It takes guts, conviction, determination, self-confidence, and a willingness to fail miserably. This is why most dreams remain unfulfilled. Most of us are scared of failing. I don’t mean failing something like a test or a college class, but failing on a grand level. There is something very real in failure on that sort of grand level.

Into the Wild is that sort of story. Our hero is Alexander Supertramp, nee Chris McCandless (Emile Hirsch), a young man fresh out of college. Chris is an idealistic young man, much of this in direct reaction to his parents Billie (Marcia Gay Harden) and Walt (William Hurt). Wealthy in that East Coast private contractor sort of way, but typical of at least movie people with too much money, their marriage is rocky, and the talk of divorce is frequent. This has a strong impact on Chris and his sister, Carine (Jena Malone).

At his college graduation, Chris tells his parents that he believes his grades will get him into Harvard Law, and that he has a good $24,000 and change still in his accounts. His parents offer to pay for the rest of his schooling and also offer to buy him a car, an offer that sets him off onto a rant about material possessions. After his parents leave, Chris makes his decision. He writes a check for most of the contents of his bank account and mails it off to charity, then destroys his credit cards, driver’s license, Social Security card, and takes his remaining money and burns it, dropping completely off the map. He renames himself Alexander Supertramp and sets off for Alaska and the chance to live completely and totally off the grid of modern human existence.

He hitches rides here and there, initially with a hippie couple named Rainey (Brian H. Dierker) and Jan (Catherine Keener) who are having relationship problems of their own. He stays with them for a few days, then moves on, although he meets up with them again. He spends time next working on a farm in the Dakotas for a man named Wayne Westerberg (Vince Vaughn). He learns how to drive a combine, earns money despite claiming not to need or want it, and learns about hunting from a man named Kevin (Zach Galifianakis). When Wayne is arrested, he moves on again, buying a kayak with his combine money, and heading south. This is the Wayne he writes to throughout the film. He even has time for a little romance with a young girl named Tracy (Kristen Stewart).

The story is told in a series of chapters, each one a certain length of time of Alex’s journey into the wild. Essentially, per his own logic and ethics, Alex was born the day he gave up his identity and became Alexander Supertramp, and he grew up on the road. His final chapter begins before he gets to Alaska with arrival of Ron Franz (Hal Holbrook). Ron attempts to understand the life that Alex has chosen.

Ultimately, he does reach Alaska and heads out into the wilderness to live on his own. Life is difficult, but he sticks with it through a brutal winter, in no small part because he finds an abandoned bus that had already been converted into a makeshift shelter.

The “present” of the film is his time in what he calls the “Magic Bus.” Most of the rest of the film is told in flashback of his journey getting to that place. We see him through trips across the border into and out of Mexico as he heads south and then back up north. His sister narrates much of his story, telling not only of his life before he became Alexander Supertramp but also of the struggles of their parents to locate him.

This is a film of juxtapositions. We see the extreme privation of Alex’s life and the beauty of the world that he has chosen to surround himself with. We see his conviction tested as he lives in extreme poverty back in the United States compared with the wealth of the people he sees walking the streets around him. In a world of plenty, he has chosen instead a life with nothing but the road.

Ultimately, what Chris McCandless/Alexander Supertramp did was to live the dream that many people have had before him, and will have after him. It’s the dream to walk away from everything and leave the world behind, to exist without the meaningless trappings of the world that we live in.

Chris/Alex doesn’t make it out of the wild alive. Eventually, he makes a mistake, eats the wrong thing, and dies. The cynic will interpret this as essentially meaning that ultimately, our dreams, our hopes, and our aspirations will come to nothing. Every dream that we have will be destroyed or end in failure. The optimist looks at this film and sees that, despite everything, Chris McCandless truly did live his dream for several years. Ultimately, while he died, he did exactly what he set out to do. That ultimately, he decided that his dream was wrong says nothing about his conviction, or his attempt to fulfill it. Being wrong in the discovery of a great truth is no shame.

I’ve known several people who have gone far out of their way to live a dream, and win or lose, I admire that. For me, this blog represents something very close to that, although admittedly I’m doing it from the comfort of my home. It’s a ridiculous thing to follow a dream, and yet it’s also what makes things worth it.

Why to watch Into the Wild: Conviction.
Why not to watch: Ultimately, dropping out has a price.
Posted by SJHoneywell at 10:22 PM

Email ThisBlogThis!Share to TwitterShare to FacebookShare to Pinterest
Labels: drama, Into the Wild, Sean Penn