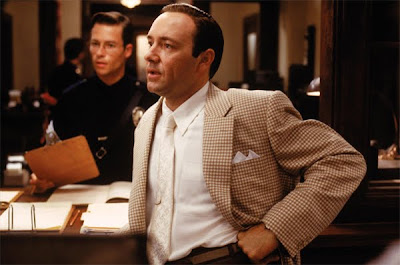 A great film noir requires a number of elements to make it sing. You’ve got to have people doing bad things, of course. Without people acting shamefully, there’s nothing to base the film around. Generally that means sex and murder, which always help. Additionally, you’ve got to have a detective—police or otherwise—who needs to discover the truth on some deep, spiritual level. A guy who wants to close a case isn’t enough. The gumshoe has to need the truth. You also need a complex plot, one with threads connecting all over the place. It should start simple and then, as a thread is pulled, reveal that everything is all connected in one sordid mess.

Of course, it also helps to have a great cast.

L.A. Confidential takes the idea of the 1940s and 1950s crime drama and modernizes it, but not really too much. Made in 1997, the film is designed to feel very much like a film noir from way back when. Admittedly, it loses a little something by not being in black and white. Color seems somehow too much for film noir, which should be loaded with shadows, sharp blacks, crisp whites, and plenty of grey in between blurring the lines.

The story starts easily enough. A group of Mexicans are arrested for allegedly injuring a couple of cops around Christmas. The cops themselves, in their cups because of the holiday, decide to take things out on the prisoners, and a brawl ensues. A few cops, those who’ve already earned pensions, are let go with one exception—Dick Stensland (Graham Beckel), the drunken, out of shape partner of Bud White (Russell Crowe). Stensland is booted from the force thanks to the testimony of Ed Exley (Guy Pierce), an up-and-comer in the department. The final nail in the coffin comes from Jack Vincennes (Kevin Spacey). Vincennes is a showboat cop who performs a lot of high profile, highly publicized arrests. He’s also the LAPD’s man on the scene for “Badge of Honor,” a Dragnet-style television show.

Much of Vincennes’s publicity comes from Hush-Hush magazine, a sleazy tabloid of tell-all stories run by Sid Hudgens (Danny DeVito). Sid will do anything for a lurid tale, and bribes to Jack keep him in cover stories rife with the sort of thing people have always loved reading.

Shortly after the jail riot, Dick Stensland is killed in a massed shooting at a diner called the Night Owl. Also killed is a young woman. She’s a prostitute who has had plastic surgery to look like a movie star. She worked for a man named Pierce Patchett (David Straithairn), who has an entire stable of prostitutes who look like stars. None of these is more sought after than his Veronica Lake look-alike, Lynn Bracken (Kim Bassinger).

And that’s just the start. As our three cops dig deeper into the Night Owl slayings, they start to put together facts that indicate the entire thing, as well as a number of other murders, were a set-up taking care of 25 pounds of heroin. Since the local mob boss had been put away for tax evasion, the void has brought in criminal elements from around the country. That, more than anything, is likely what lead to the shooting at the Night Owl, even though the official version reads somewhat differently.

The plot is a good one. Throughout, just enough is revealed to keep the audience clued in to the story as a whole, but not so much is revealed that everything can be explained readily until the very end. Instead, we learn things when the characters learn things, and not before. That’s how it should be.

As a rule, I don’t love Kim Bassinger in much. I’ve never really been sold on her acting skills, and while she’s certainly not ugly, she also really isn’t my tastes. Here, she is resplendently gorgeous. More importantly, the woman can act, and does it well. The other actors here I more or less generally like, the underrated David Straithairn in particular.

One aspect of this film I find attractive is the depth of the characters. It would be easy, for instance, to make Bud White a caricature of the hard-bitten cop on the edge. Instead, this is a real man with real needs and emotions. Flat characters may be easier to write, but they are difficult to care about. Everyone here, at least all of the major players, are fully realized as people, and thus simple to care for.

This film features great writing, fabulous acting, a cast of thousands, and a truly great script, one of the greats film noir scripts ever greenlit. Not watching this would be criminal.

Why to watch L.A. Confidential: As good a noir as you’ll find.
Why not to watch: I can’t think of anything.
Posted by SJHoneywell at 11:57 PM