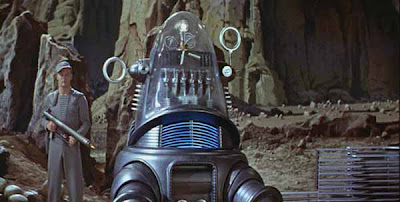 Ah, 1950s science fiction. Is there any situation it can’t make better, any bad day it can’t improve? So much of the science fiction and horror from the 1950s is terrible, which is why so much of it ended up appearing on Mystery Science Theater 3000. However, there are tremendous bright spots from this strange decade. The imaginations of authors, filmmakers, and children everywhere were on the wonders and promises of the atomic age. The boom in crazy science fiction movies was an outgrowth of that. So too was the Cold War and rampant paranoia about those nasty Russians.

The problem that many films of the era made was in having human-like aliens that could speak perfect English despite having no way to learn English. Certainly it made it easier for the audiences to follow, but it must have struck some people as ridiculous. Additionally, the technology was an interesting mix of unexplainable high tech and flat out goofy stuff. Forbidden Planet hardly manages to transcend this, and yet there is a real charm here. Perhaps its biggest selling point is that it manages to be a story without any moralizing about the evils of Communism or the awesomeness of all things American. (Don’t get me wrong—as an American, I do love my country, but I’m also smart enough to realize that it’s okay that other people love their country as well.)

It does have a great deal in common with virtually all science fiction films of the decade, though. The spaceship itself has a huge crew that appears to run like a naval vessel. I suppose, in those pre-space flight years, this makes a certain amount of sense, but seeing guys walking around on large, open decks and a dude wearing an apron (Earl Holliman plays the cook) comes off as odd in a day and age when most people are aware of some of the rigors of space travel.

Regardless, the man in charge is J.J. Adams (Leslie Neilsen, before he did nothing but comedy). He leads his crew of mostly young men as they travel to Altair-4, a planet colonized 20 years previously. What they discover is a single man surviving on the planet. This is Dr. Morbius (Walter Pidgeon), the ship’s philologist. And I always get a chuckle here. Why would a scientific mission to colonize a planet 17 light years from Earth need an expert in language and literary study? I mean, I have a degree in stylistics, which is pretty similar to philology, but I can’t see as how I’d be that useful doing linguistic-based literary criticism on a space trip.

It’s a strange world, filled with ancient technology of a race Morbius calls the Krell. Morbius has been tinkering with their devices and has increased his own level of intelligence enough to create Robby the Robot (playing himself), a giant powerful creation that manages to take care of most of the work on the planet. Robby also seems to work under Asimov’s Three Laws of Robotics.

The arrival of the crew also unleashes a return of a terrible creature, the one that killed off everyone in the original ship’s crew. The beast is gigantic, invisible, and evidently immune to anything the men of the ship can throw at it. Now, Adams and his crew need to determine what the beast is and how to stop it before it kills all of them.

While Forbidden Planet manages to fall into many of the same clichés as most 1950s sci-fi films, it also manages to transcend a number of them. The plot here is pretty good, as is the origin of the terrible creature that stalks Adams and his crew. It’s also fairly impressive how the filmmakers managed to skirt around the edges of decency. A few of Anne Francis’s costumes are short enough to almost reveal ass curvature below the hemline. She gets a scolding from Adams and switches to a longer gown at one point, but immediately goes back to skirts short enough that sitting down in them will allow anyone in the room to see whether or not she’s keeping up on her bikini waxing.

So much of this film is a product of its time that it’s difficult to judge it by modern standards. The necessary romance element that appears eventually between Alta and Adams, for instance, happens at movie-fast standards. They argue, and immediately they are passionately in love with each other and can’t live without each other. Of course, that kind of thing still happens in movies today, but it always happened in movies in the ‘50s.

Additionally, my mind works immediately to other realities that are simply ignored in the film. You know going in that Alta is going to end up on the spaceship at some point. How the hell is that going to work? Trapped for a year at light speed among a bunch of sex-starved young men? She’s got an interesting year ahead.

I do love this movie, but I also understand why other people don’t. The last time I watched this, I tried to get my wife and kids to enjoy it with me, but they all fell asleep before the appearance of the terrible monster. It’s worth mentioning that a lot of the effects are obviously animation, but many of them are pretty good. When we do finally get a look at the creature, it’s most definitely drawn on the frames of film, but it looks great for what it is.

Watch it for Robby the Robot, and watch it to see Leslie Neilsen as the romantic leading man. And watch it because truly great science fiction films from the 1950s are national treasures that deserve to be watched, remembered, and enjoyed.

Why to watch Forbidden Planet: One of the great, influential science fiction films.
Why not to watch: Ultimately, it’s kind of silly.
Posted by SJHoneywell at 9:58 PM