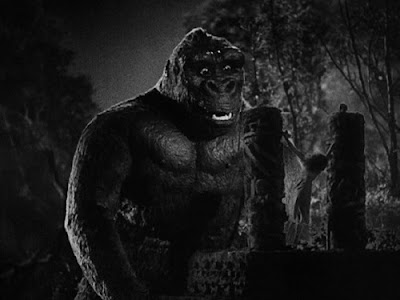 I love used bookstores because it’s always a surprise at what is contained within them. That’s true to a lesser extent of a used DVD store. There, you can rest assured that 90% (or more) of what you find is utter crap, direct-to-DVD stuff that sells for next to nothing because nobody wants it in the first place. But sometimes, good things show up. When I find a real treasure, I can’t pass it up. I went movie shopping a couple of days ago and found some good ones, including the surprising find of Foolish Wives and an almost as surprising Forbidden Planet. But the real steal was King Kong.

There is no question that this movie shows its age, which is probably why it’s been remade twice since the original 1933 version. Stop-motion animation was the height of technology in those early days of film, but it’s not so much used anymore. Admittedly, there is a surreal quality to stop-motion, particularly for something that requires as much movement as a giant ape. It doesn’t look real. It’s natural, I suppose, for modern filmmakers to want to go back to these early films and modernize them. The recent release of Clash of the Titans is much the same, and I fully expect to see a new version of Jason and the Argonauts announced any day now.

The story is one almost everyone knows. A filmmaker named Carl Denham (Robert Armstrong) takes a film crew to an island in the South Pacific to create his new picture. When he can’t get a leading lady because of his secretiveness, he scours the streets of New York until he finds Ann Darrow (Fay Wray). Desperate, she agrees to go on the journey with him and the ship’s crew. For Ann, the most important member of the crew is John Driscoll (Bruce Cabot) who quickly falls in love with the Ann despite his misgivings about a woman being onboard the ship with him.

Eventually, the ship reaches Skull Island, where a tribe of natives is undertaking a ritual to marry off Kong, the local god. The chief (Noble Johnson) offers to buy Ann, but is refused. Instead, a few of the natives sneak on board the ship at night and spirit her away to be sacrificed to their god.

Of course, the god is real—he’s a giant ape, officially billed at 50 feet high, but more like 20 feet based on the scale of other objects and people in the film. Kong takes Ann off with him, and much of the rest of the film is the pursuit of Ann and Kong by the men from the boat. Many of them die in horrible ways, there are plenty of battles with dinosaurs, and with Kong himself, culminating in Kong’s capture and the long sail back to New York, Kong’s escape, and the final scene with Kong climbing the Empire State Building.

The original version of this film is a shocker for the time in which it was made, and it influenced possibly more films than any other in history. Anything with a lot of stop motion came from here, as did pictures with fighting dinosaurs, giant animals of any sort, films in exotic locales, jungle pictures, and almost anything else. Tarzan films to Jurassic Park owe a debt here in any number of ways.

Just as notable is how far this film goes for 1933 before the 1934 Production Code. In several scenes (cut in later re-releases of the film, restored in more recent versions), Fay Wray is quite obviously running about without the support of a bra; this is most evident in a scene on the deck of the ship when it is evident that Miss Wray is quite cold. Later, Kong nearly undresses her and starts to get a little frisky, the culmination of which is thankfully not shown. When she escapes, there’s damn close to nudity.

It’s not just the sexy-sexy, though. The battle between Kong and the tyrannosaur is pretty gruesome, with Kong essentially ripping the dinosaur’s jaw apart. But right before that, Kong drops half a dozen men off a log bridge into a deep ravine, and they splat in a way that is unexpected from a film made in a time when directors didn’t give gunshot victims much in the way of bullet holes or blood. Dinosaurs chop on sailors and toss them around like rag dolls, things that must have terrified audiences when the film originally opened. Kong beats another dinosaur to death and nearly rips the wings off a pterodactyl as well. He mashes natives into the ground under his feet.

The magic of stop-motion animation is that while it may not have the realism of more modern animation styles, there is a real charm to it. Kong is one of the greatest movie creations not because of his essential realism, but the opposite. Kong is a great creation because he is so fantastic and unreal. There is a pathos to him that cannot be otherwise duplicated. The Kong from the 1970s was more realistic, and Peter Jackson’s version more real still, but neither has anything like the empathetic power of the original.

This is not a movie to show anyone lacking maturity. The effects compared with those of the modern age cannot stand up, and anyone who can’t see past that surface reality will also never understand the magic of this original version of the giant ape and the woman he falls for.

It’s impossible to discuss King Kong at any length without talking at least a little about Fay Wray, who died just a few years ago about a month before her 97th birthday. Wray had a decent career, although she starred in a lot of B horror movies. She was the original scream queen (she screams a lot, and does it well), and while she was certainly in other movies, she is forever attached to this movie as completely as Kong is himself. Perhaps she deserved a better fate. Then again, being forever remembered as the star of one of the greatest movies ever made isn’t a terrible fate.

Why to watch King Kong: Perhaps not as pretty as its remakes, but infinitely more human, believable, and poignant.
Why not to watch: You need modern animation.
Posted by SJHoneywell at 10:06 PM