Film: Idi I Smotri (Come and See)
Format: DVD from NetFlix on laptop. 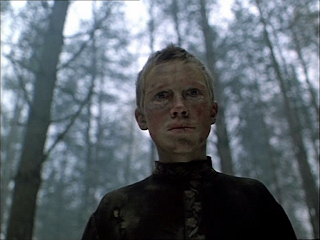 Films in general have a history with war, and most specifically with World War II. Many war films take a gung-ho point of view toward conflict. Wars are seen as honorable, noble, something that makes a man a man. This may well have been true in a day and age when men stood across a field from each other and fired volleys, but it still probably was only true in stories. Regardless, for a good chunk of the history of cinema, war was depicted less as a hell and more as a grand adventure. People die climbing mountains and crossing deserts, and people die in war. Those who survive, though, become real men, and the risk is worth it.

There’s still some evidence of this in plenty of war films even today. Certainly there is more than a whiff of the horrific in a film like Full Metal Jacket, but there is also a sense that if Joker survives the war, he comes out the stronger man for it. Joker will undoubtedly be changed by his experiences in Vietnam, but he will not return a broken man. There’s a little of the same in Saving Private Ryan, as horrible as the opening sequence is, there is certainly an ennobling quality in how many of the characters are perceived by the film’s end. Certainly this depiction was much more realistic than many past ones, but there is still a sense of war as ultimately having some sort of function.

However, many modern war films take a much different approach, showing war as something truly terrible that breaks and destroys those it doesn’t kill outright. One of the greatest of these is Idi i Smotri (Come and See, although more technically translated as Go and Look). War in this film does nothing but destroy. It’s as if a film can only truly depict the real horrors of war if the filmmaker is from a country destroyed and devastated by a great conflict. One can’t know its true destructive powers until one has seen these horrors first hand, and seen these horrors inflicted on old women, children, and innocents without regard.

In 1943, with the Germans enmeshed in Russia, a boy named Florya (Aleksey Kravchenko) wants nothing more than to join the partisans fighting for his native Russian state of Byelorussia. However, to join the partisans, he first must find a gun, which he does by digging up a rifle at the site of an old battle. Conscripted into the partisans, Florya is naturally excited by everything he sees. He looks the part of a young, eager boy, particularly in his good suit, which is several sizes too big for him. Nonetheless, he is a patriot for his people, and happy just to be a part of the fight against the Nazis.

He’s left behind, though, and forced to give up his boots, but eager for combat, he tails after the marching ranks of partisans anyway. It is here he discovers Glasha (Olga Mironova), who he has seen at the camp. She is infatuated in her own way with Kosach (Liubomiras Lauciavicius), the leader of the partisans, and it becomes evident that Florya is guilty of a little hero worship himself. The two survive the bombing of the partisan camp, an attack that leaves Florya partially deafened, which is mimicked by the high-pitched ringing and muted dialogue of the soundtrack.

As the film continues, Florya witnesses the complete terror that war brings, both in his role as a partisan and as someone who essentially should still be a civilian. Despite the beauty of the setting in the Byelorussian forest, what he witnesses is the most terrible of events. Slowly, these events start to take their toll on him emotionally, mentally, and physically. As the film progresses, Florya slowly becomes more and more shattered and fragmented.

He and Glasha return to his home to find his mother and baby sisters murdered along with the rest of the town. He witnesses his comrades gunned down by German troops, sees a church full of Byelorussians burned to death by Nazis, who take pictures of the blaze, then rape a woman who escaped the fire. Over and over, the worst atrocities take place in front of him, each one stealing his innocence, and eventually his mind.

By the end of the film, Florya, still a boy physically, has the face of an ancient man. He has acquired the 1000-yard-stare of a man who has seen the worst of the world and survived it only by becoming a part of it. His eyes are surrounded by lines of fear and panic, his forehead creased like a man’s five times his age. Florya has looked into the abyss, but he has not seen it staring back at him. Instead, he’s still staring into the abyss.

That these terrors take place in what is frequently gorgeous scenery makes them doubly horrible. That the happen at all, let alone to a young boy, makes them unspeakable. Kravchenko gives a performance here that an actor with twice his age and ten times his experience would find daunting. He is a haunting and haunted presence on the screen, and his slow descent into the depths of whatever madness awaits at the other end is all the more terrible for being filmed so beautifully.

Anyone who is in favor of any war at any time should watch this film. It stays with its viewer for a very long time.

EDIT: I do not apologize for the fact that sometimes an insight or idea occurs to me after I've written about a film. It's more common, I think, with a film as emotionally shattering as Idi i Smotri than lighter fare. What I think is the real meaning of the last 10 minutes of the film rolled into my brain this morning, though. If you have not yet seen this film, don't read the following spoiler. This is a conclusion worth finding on your own.

Florya finds a picture of Hitler in a puddle, and overcome with rage, he begins shooting it. Interspersed with his shots, we see file footage of the atrocities of war and Hitler speaking, but we're also traveling backwards in time. With each of Florya's shots, we retreat further, eventually going through Hitler's rise to power, and the era between the wars. Florya continues to shoot into the picture, and we run backwards through World War I and Hitler's childhood. And then, we see a picture of Hitler as an infant. Florya stops, stares, and tears leak out, dribbling down his cheeks. He puts up his gun and joins his comrades.

It's important that he doesn't shoot the infant. Despite how shattered his mind and emotional state, Florya has retained his essential humanity. Whether this is propaganda (possible, at least to a small extent) or simply a small offering of hope I cannot say. It doesn't mitigate the horrors that Florya has seen. But perhaps there is a small measure of hope in that Florya has not lost all sense of his own humanity. Somewhere in his shattered mind, there's still that kid from the start of the movie.

The more I think about this film--and I will think about it for a very long time--the more I want to find other people who have seen it and discuss it with them. It is the most powerful anti-war film I have ever seen, and I'm not sure I want to see one that's more powerful.

Why to watch Idi I Smotri: It is staggering.
Why not to watch: It is also unrelenting and brutal.
Posted by SJHoneywell at 12:19 AM