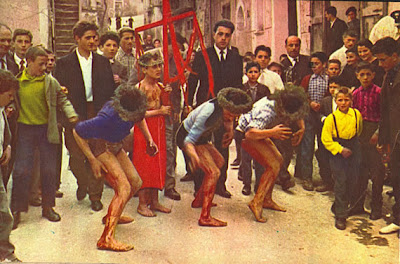 When I was a kid, videotapes became the latest thing, and everyone wanted in on the act. In my area, there was only one video store. It was about 10 minutes from my house, out in the middle of nowhere. The place was called “Video Bug,” and they stuck the boxes for their tapes up on the walls. Each box had little strips of Velcro on them with little tabs. Red tabs were for VHS tapes and blue ones represented Betamax. If you wanted a movie, you took the little tab to the desk, paid, and got your film.

While the place certainly did a brisk trade in more standard films, such was the nature of things at the time that a vast amount of their stock in trade was films on the lower end of the film spectrum. You might not, for instance, be able to find Casablanca, but you could certainly find multiple copies of Faces of Death. That was the market, and they played to their chosen consumer.

I’m aware of this in no small part because those appeared to be my brother’s choice of films more often than not. Tom was attracted to the seamier side of film in his late teens. I can distinctly remember him renting Dawn of the Dead about every six months or so. He’d sit in the den with a six pack and cheer for the zombies. I can’t say how often he rented Faces of Death, but I’m certain he did, because I can remember walking through the den and seeing a couple of minutes of it.

Mondo Cane (A Dog’s Life, although more accurately translated as A Dog’s World) is the first excursion into such “shockumentary” style filming, at least to my knowledge. Vaguely documentary, the film shows scenes from around the world of people and animals behaving badly, strangely, or in shocking and horrible ways. We see victims of shark attacks in Malaysia as well as those same people taking revenge on the sharks by stuffing the gullets of the creatures with poison sea urchins. We see drunk German people standing passed out in the middle of streets, or lying on the sidewalk completely inebriated. Tubby Japanese businessmen vibrate on electronic devices designed to cure their hangovers, and then they are publically bathed by young women.

Much of what is shown here is intended to be silly, but quite a bit is intended specifically to shock, disgust, or cause revulsion. We see, for instance, a Chinese man prepared for the grave, the brutal butchering of hogs for a festival, and the force feeding of geese to create fois gras. We see diners in New York feasting on a meal of insects, the quick skinning of a snake in preparation for the cookpot, and dogs in small cages awaiting the same fate.

Is it shocking? Horrible? Some of it certainly is. There is a certain type of person who finds a film like this entertaining or worth watching, but I am not one of those people. There is no fascination here for me. There is no pleasure in seeing the results of shark attacks or watching animals prepared for slaughter or tortured. I find no joy in this vision of the world. I’m hardly naïve about such things; I’m jaded enough and worldly enough to have known about many of these things before watching this film. That doesn’t mean I need to or want to see them played out in front of me. I’ve seen enough drunk people to not get entertainment value watching German men pee in public. I don’t need to watch a necrophiliac practice his particular perversion to know that such a thing exists, either. There’s not pleasure in seeing bulls have their heads removed by Gurkha warriors, or seeing men gored by bulls in Portugal.

By modern standards, Mondo Cane is pretty tame after all. Its importance is not so much what it shows on the screen, but how it shows it. It undoubtedly influenced a huge number of filmmakers interested in shocking the public with something new and terrible. And I do have to admit that the car crusher scene was pretty dang cool.

Ultimately, there’s not much here to recommend. There’s more shocking film available, more notorious film, and other ways for people who are into this sort of thing to get a bigger thrill. Even the naked women covered in paint and rolling around on canvases is less titillating than about 50% of television.

Important? Sure, because it did create something new. Worth watching? Only in that sense. I can’t think of much to recommend it. Voyeurism might be someone’s kink, but evidently it isn’t mine.

Why to watch Mondo Cane: There’s a market for shock cinema.
Why not to watch: You aren’t a part of that market.
Posted by SJHoneywell at 7:30 PM