Film: The Breadwinner
Format: Streaming video from NetFlix on the latest internet machine. 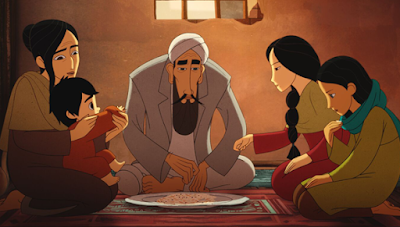 I bought a Chromebook today because there are new restrictions that have been placed on my laptop. I suppose those restrictions are fair; the laptop I generally use is owned by where I work. But streaming sites in general have been made no-fly zones, as have some game-related sites that I like to go to. So I bought myself a Chromebook and christened it today with The Breadwinner, which has just shown up as a streaming option on NetFlix. It wasn’t a film that I was leaping at the chance to watch, but Best Animated Feature is the only one of the latest set of Oscar nominations I hadn’t hit yet.

The first thing that struck me here was that this felt very familiar. Then I realized that I had kind of already seen this before. Osama, released in 2003, is very much the same basic story as The Breadwinner. In both films, a young girl and her family are more less left without a man in the household in Taliban-dominated Afghanistan. Since women are not allowed to leave their houses when not in the company of a man, this sets them up to slowly starve to death, unable to even set foot outside their home without the fear of immediate reprisal. In both cases, the daughter—still young enough to possibly pass for a boy—disguises herself in an attempt to find work and buy food. In the case of Osama, this goes tragically, terribly wrong. In the case of The Breadwinner, that’s much less the case.

Parvana (Saara Chaudry) works in the market with her father (Ali Badshah) selling a few small possessions and offering to read and write for people. He was once a teacher, reduced to this state by the ascendance of the Taliban. Having Parvana with him is a risk, since women of any age beyond toddlerhood is essentially forbidden. In fact, Parvana’s presence attracts the attention of Idrees (Noorin Gulamguas), a boy a few years older than Parvana and a former student of her father. Words are exchanged, and because in Afghanistan the power of the gun is preeminent, that night Parvana’s father is taken to prison despite no charges being leveled.

This means that Parvana, her mother (Laara Sadiq), her older sister (Shaista Latif) and her baby brother are left with no means to make money or buy food. No one in the market will risk selling to Parvana because she is not technically allowed out of her house on her own, and even selling her rice would bring down the wrath of the Taliban. So she cuts her hair and takes up her father’s former place in the market. She also meets Shauzia (Soma Chhaya), another girl and a former schoolmate. Shauzia is doing essentially the same thing as Parvana, since she is now the only child her father has to help him. The two, now disguised as boys, attempt to find work every day. For Shauzia, money means leaving Kabul and heading to the ocean. For Parvana, it means bribing guards at the nearby prison to see her father.

While all of this is going on, Parvana is also, night by night, making up a story to keep her baby brother from crying. Her mother is ill, but writes to a cousin to see if a marriage can be arranged for her sister. At least that would get them out of the house and potentially start their lives again. But, of course, things aren’t that easy.

I will say this for The Breadwinner: it’s not nearly as bleak as Osama. In Osama, our title character is so immediately overwhelmed by being thrown into a world that she has had no ability to know that she is immediately doomed. In The Breadwinner, Parvana has been educated. She can read and write, and thus has some small ability to move around in society without being immediately pointed out as being someone who doesn’t belong. It’s also, frankly, easier to pull this kind of thing off in animation. In Osama, it’s immediately apparent that she is a girl in disguise. Here, both Parvana and Shauzia pass for boys with almost no problem.

I understand the desire to make this more uplifting. While The Breadwinner isn’t specifically a movie for children, it is more family-oriented than most other films that tackle this sort of topic. But in the quest to give this a more uplifting feel and theme, it seems to veer far away from reality. I don’t know what life is like in Afghanistan, but my guess is that the scenes here that are meant to show the brutality and unfairness of life there are still softened from the more horrible and terrifying reality.

For all that, this is beautifully made. The artwork is lovely and the story is told with care. Nora Twomey cut her teeth on films with Tomm Moore like The Secret of Kells and Song of the Sea. While the animation here is more similar to the latter than the former, there is a through-line from those films to this one. There is the same sort of love and care here, the desire to tell a real story as well as possible. Much of the film relies on Parvana telling a fanciful story that she makes up, one that ultimately reveals itself to have a tragic heart.

I want to like The Breadwinner more than I do. It feels, for all of the terrible reality it holds, too positive in many respects. Osama felt like reality; this feels more like the hopeful spin at the end of dystopian young adult novel.

Why to watch The Breadwinner: The story feels relevant in many ways.
Why not to watch: It’s old territory given an oddly uplifting ending.