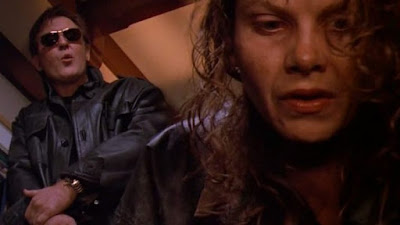 There was a glorious moment of time in the 1980s and early 1990s when it was a legitimate casting choice to have John Lithgow as a heavy. Movies like Ricochet and Cliffhanger had Lithgow playing a vicious, scowling bad guy, a psychopath or sociopath who reveled in the pain and degradation of others. Y’know, the guy from Third Rock from the Sun, the actor who has put out multiple CDs of children’s songs. Toward the end of that wonderful moment in history comes Brian De Palma’s Raising Cain, which has the lovable Lithgow playing a man who is truly malevolent.

Carter Nix (Lithgow) is a child psychologist who has taken a few years off from his practice to study the early development of his daughter (Amanda Pombo). But we learn quickly that there’s something really off about Carter. In the first 10 minutes of the film, Carter has blown some sort of dust into the eyes of a woman and chloroformed her so that he can kidnap her child. Oddly, Carter’s twin brother Cain (also Lithgow) shows up in the middle of nowhere to help him deal with the woman. It doesn’t make a great deal of sense, but Cain claims he will deal with the woman and take the child to their father, Dr. Nix (Lithgow again).

It’s soon clear that there is something going on with our friend Carter Nix. His father, evidently an expert on child rearing, has been collecting children to use in an experiment. While it’s Carter who seems to make the initial approach to the women, it’s Cain who subsequently gets the children to their father and kills off the women in question.

Simultaneously going on with all of this is the fact that Carter is married to Jenny (Lolita Davidovich), who has just started to rekindle an affair with Jack (Steven Bauer), the widower of a former medical patient of hers. For some reason, this affair is very important even though it doesn’t really seem to impact on much of the plot. Eventually, Carter turns on Jenny after finding out about the affair and needing to get his daughter to his father, who is evidently dead. When Jenny disappears, Dr. Lynn Waldheim (Frances Sternhagen) shows up, having once worked on a book with Dr. Nix the elder. That book was about multiple personality disorder, and focused on a young boy named Cain. I’ll let you do the math from here.

Raising Cain has a fun cast. I don’t care much in any direction for Steven Bauer or Lolita Davidovich, but I do like Lithgow and I’ve been a fan of Frances Sternhagen for years. It’s also fun to see Gregg Henry in a role as a cop.

The problem is that this damn thing is pretty much incoherent. It takes forever to get going anywhere, and it feels like at least half of the first hour of this has nothing to do with anything else. A huge amount of time is spent dealing with Jenny’s affair with Jack. There are bizarre dream sequences involving this as well, none of which seem to make a great deal of sense. It’s not until well into the film that we have anything remotely like an idea of what is happening, and by the time we get that, everything has simply gone too far for the audience to retrofit all of the revealed knowledge into what has previously happened.

That, more than anything is the problem with Raising Cain. It wants to be a thriller about, more or less, a mad scientist, but it gets completely bogged down in stories that take forever to bear fruit. Jenny’s infidelity with Jack has a huge footprint in the film, and does for a very small and not very satisfying payoff. We spend far too long on it and for virtually no real impact, or for an impact that could have easily been handled more efficiently to the same effect.

What’s really disappointing here is not that the cast is misused (it is) or that the story is disappointing (it is). It’s that writer-director Brian De Palma seems to have run out of ideas with this film. He’s literally walking the same ground he did in a movie like Dressed to Kill, in places almost walking in the same footprints. The erotic stuff here really isn’t, wasting even the marginal talents and appeal of Lolita Davidovich. De Palma is better than this, and so is pretty much the entire cast. Raising Cain is a disappointment, and there’s just no way around it. Watch Dressed to Kill instead.

Why to watch Raising Cain: Lithgow as a heavy is still just a wonderful concept.
Why not to watch: It’s only vaguely coherent.