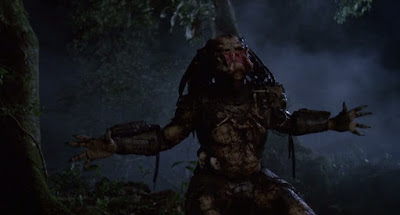 I’m often a little nervous going into a movie that was important to me in my past. If you grew up roughly when I did, you knew Predator when it was new. You loved it for Jesse Ventura and Arnold saying, “Get to the choppah!.” The predator itself was cool and the effects were like nothing anyone had seen before. It wasn’t Citizen Kane, but it was crazy and had cool effects and lots of explosions and paramilitary garb. It was absolutely the sort of movie you grabbed for a weekend from the local video rental place.

But when a movie like this is 30+ years old, whether or not it really holds up is a real question. There are plenty of movies from this era that do, of course. Ghostbusters is still funny, for instance. But not all of them do. I rewatched Stripes a couple of years ago and spent most of the running time waiting for it to be funny at all let alone as funny as I remembered it. So what about Predator? Does it still pass muster more than 30 years on?

I’m happy to say that for the most part, it does. Oh, there are some moments where the special effects aren’t that special and look like they were built on a Commodore 64, but a lot of it holds up really well. The predator in particular looks great, and the cloaking device is still really effective. Okay, it’s not the “holy shit” moment it was the first time I saw it 30 years ago, but it’s pretty great.

I’ll cover the plot quickly for two basic reasons. First, there’s honestly not a great deal of plot here. Second, the chances are very good that you’ve seen Predator and probably seen it multiple times. After we see a spaceship land on the planet we jump to the Special Forces team who will be our heroes. They are leader Dutch (Arnold Schwarzenegger), medic Mac (Bill Duke), heavy weapons specialist Blain (Jesse Ventura), radio/comms man Hawkins (Shane Black), demolition expert Poncho (Richard Chaves), and tracker Billy (Sonny Landham). The team is called in by the CIA to extract hostages from a jungle at the behest of Dillon (Carl Weathers). They soon discover that this was just a cover—there aren’t hostages, but a group of Central American insurgents complete with Russian intelligence officers. But things are still hinky. The reason is that the area is being attacked by a creature from that spacecraft that showed up at the start of the film. The creature inside is a big game hunter who has come to Earth to hunt humans.

Now, in something that is wildly different from the typical of a movie like this, our predator critter isn’t attempting world domination. It’s here for the sport and the desire to return to its world with some trophies. It holds to very specific rules. We learn, thanks to surviving insurgent Anna (Elpidia Carrillo) that the creature will not attack anyone who is not actively engaged in self-defense. Of course our special forces team and CIA operative are unable to really do anything without being actively armed to the teeth, so they start getting picked off one man at a time until we get our final confrontation between Dutch and the critter.

One of the main selling points of Predator was the special effects, particularly of the alien creature. The creature’s cloaking device was described as resembling a chrome man in a room made out of mirrors, and that’s pretty close to what it looks like. It’s one of those effects that holds up surprisingly well despite its age. When the cloaking device malfunctions, the malfunction looks very much like rudimentary computer effects. The makeup/costuming job on the predator is also excellent—it still looks great and surprisingly real.

Predator isn’t really intended to be much more than it already is. It’s a vehicle for Schwarzenegger to hold guns, shout monosyllabic lines, and kick a little alien ass. It’s almost certainly made with the intent of being really nothing more than that. Arnie and team bite off more than they can chew, and the good guys get slowly picked off as they head back to something resembling civilization.

The truth is that I don’t know how objective I’m going to be here. I like this movie quite a bit, and I have liked it since I first saw it multiple decades ago. I love that it genuinely holds up in almost every respect, but I suspect that there may be more than a little nostalgia in that opinion. Still, “Got to the choppah!” will never die and will always be classic.

Why to watch Predator: It’s ‘80s science fiction royalty.
Why not to watch: It doesn’t quite hold up as well as you might like.