The Unbearable Length of this Movie

Film: The Unbearable Lightness of Being
Format: DVD from NetFlix on laptop. 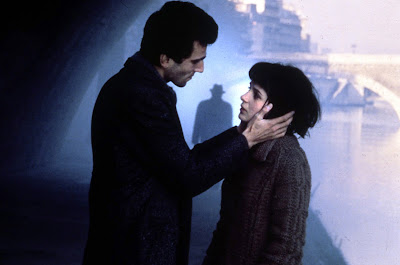 Sometimes I look at the list of movies I still have to watch for my Oscar categories and I figure it’s time to knock out the longest one. That spot has been occupied by The Unbearable Lightness of Being for months, so I figured it was time to remove it and move on. There’s something supremely satisfying in removing the longest remaining film. Sadly, in this case, it was about the only satisfying thing.

That’s a shame, too, because the cast is so good. The main characters are played by Daniel Day-Lewis, Juliette Binoche, and Lena Olin, with smaller roles for Donald Moffat and Stellan Skarsgard. That should be enough to get this not just over the hump but into the realm of must-see. The issue is that The Unbearable Lightness of Being wants to tell a lot of stories. It wants to be a sexy, erotic drama and a domestic drama and a political drama all at the same time. Because of that, the film runs just under three hours. There’s no reason for it to be that long aside from some artistic decision. The word is that Kaufman presented a two-hour confusing version for the studio to force the three-hour version he wanted. It’s clever, but I have to wonder if it was really worth it.

Much of the film takes place in Czechoslovakia pre- and post-Soviet invasion. A substantial part of the early film concerns the sex life of brain surgeon Tomas (Daniel Day-Lewis). When I say that it concerns his sex life, I need to be specific here. It’s clear right away that Tomas is having substantial amounts of sex with pretty much whomever he likes. That said, his preferred partner appears to be Sabina (Lena Olin). It’s also worth noting that this is generally speaking very unerotic. There’s some nudity, but that’s not what I mean. What I mean specifically is that there’s not a great deal of build-up for the sex. It sort of starts, and then cuts to the after in almost every case. Tomas’s go-to line appears to be “Take off your clothes,” which is again singularly non-erotic while being blatantly sexual.

One day Tomas goes to a spa to perform an operation. While there he meets Tereza (Juliette Binoche), a waitress. Tereza is a bit naïve and is bored living in the country. When Tomas returns to Prague, she follows him, moves in with him, and eventually the two are married. It’s worth noting that this does nothing to curb Tomas’s relationship with Sabina and with a number of other women. In fact, Tomas arranges for Sabina to find work for Tereza as a photographer. Around this time, the Russians invade and Tereza’s photography begins to be about the Soviets. Knowing that her photos are contraband, she gives the film to tourists to smuggle out for her. With the regime becoming repressive, Sabina and eventually Tomas and Tereza emigrate to Switzerland.

What follows is again a lot of sex. Sabina hooks up with a guy named Franz (Derek de Lint), and leaves him when he decides to leave his wife for her. Tereza realizes that Tomas is still stepping out on her and she doesn’t like Switzerland, so she returns to Czechoslovakia. Tomas follows. The last hour of the movie consists of Tomas and Tereza figuring out how to survive in Soviet-occupied Czechoslovakia and, for Tomas, how to disguise his affairs since Tereza keeps smelling other women on him.

Actually, that’s a little bit of a lie. There’s a sequence in Switzerland where Tereza, told to start photographing nude women, picks Sabina as her subject. This is literally the only erotically charged moment of the entire film. If we had more scenes with this sort of energy (a circa 1988 Lena Olin helps tremendously), the long running time would be far less of a problem. But they aren’t there.

It is the most listless I’ve seen Daniel Day-Lewis in a role. I have no doubt that this is what was expected of him and what the role of Tomas needed. But I also kind of don’t care. It makes the whole thing feel flat, and that’s not a good thing for a movie that runs 13 minutes longer than 2001. To use a Mark Kermode comparison, in 2001, Kubrick takes us from the birth of the human species to the birth of a new species. In The Unbearable Lightness of Being, Philip Kaufman takes us from Czechoslovakia to Switzerland and back, fuckin’ all the way. It’s a long way to go for a not very interesting payoff. It's worth noting that author Milan Kundera so disliked this movie that he has since refused to allow any of his books to be turned into films.

Why to watch The Unbearable Lightness of Being: Lena Olin at the start of the best part of her career.
Why not to watch: There is no need for this movie to be nearly three hours long.