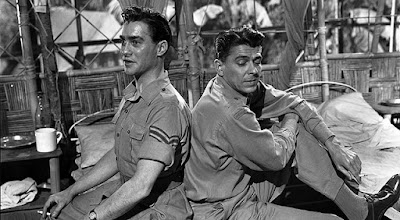 There are plenty of times I go into a movie without knowing a great deal about it. With The Hasty Heart, I didn’t even realize that this was a film with a military angle to the story. In fact, there’s not so much a military angle to the story as this is a very strange military story from front to back. In that respect it reminds me a bit of Tunes of Glory, except that this one is weirder in almost every regard.

The Hasty Heart earns some big points right away for placing itself in the most obscure and least-known corner of World War II: Burma. We’re also going to be not in combat for the most part, but in a makeshift British hospital. The war ends right at the start of the movie, a fact that is going to set up the premise for the rest of the film.

While most of the soldiers go home when the war concludes, there are a few men still to injured or sick to travel. What we’re given in one of the hospital wards is a true international contingent, most of whom will go by generic names rather than their actual names. So, we’ve got an American who goes by Yank (Ronald Reagan), Kiwi the New Zealander (Ralph Michael), Australian Digger (John Sherman), Brit Tommy (Howard Marion-Crawford) and non-English speaking African soldier Blossom (Orlando Martins), who is only capable of saying his name in English.

Into this mix comes Lachlan MacLachlan (Richard Todd), a Scotsman who was injured on the last day of the war. The operation was a success, but revealed a serious issue. His injury destroyed one of his kidneys and his second one is abnormal and will not take the strain. It will fail, sooner rather than later, and this will kill him. Nurse Sister Margaret (Patricia Neal) asks the men if they will do their best to befriend “Lachie” for however much time he has left. The problem is that Lachlan MacLachlan is, for lack of a better way to put it, an asshole. He’s suspicious of everyone, rude, angry, and surly.

And, well, the goal is to break him down. And they do, at least until he finds out that he’s dying and determines that the only reason that everyone has been nice to him is because they all knew that he was dying and that none of it was sincere. Honestly, it’s something that makes the film worth watching after a difficult middle section when pretty much everyone is having a Lachie love-in, and he’s like a kid who’s just gotten his first friend…because he has.

Here’s the thing: The Hasty Heart manages to find the one thing that pisses me off about many an older film with a medical story in it. The doctors decide not to tell MacLachlan that he’s dying. Instead, they allow him to think that he’s just managed to piss somebody off and is being kept in Burma as some sort of punishment. I mean, I get not wanting to know that you’re about to die, but not knowing in a case like this is downright cruel. I’ve never understood why or how this is a legitimate plot point in any film or story. Who the hell would do this to someone?

Along with that, the middle section of The Hasty Heart is difficult to handle. MacLachlan once he discovers that he doesn’t have to be an asshole all the time, becomes way too eager and way too excited to talk to everybody about everything and to invite everyone to come and live with him in Scotland. It’s a little much and it goes too far over the top. It’s the one part of the film that doesn’t really play as genuine.

Richard Todd’s performance is the reason I watched The Hasty Heart, and it’s a difficult one to judge. Lachie is a hard person to like. That said, Todd does a fine job playing the character. Even in the moments where he is the most annoying, he’s still believable. It’s also worth noting that Ron Reagan is pretty good in this. Sad to say, Patricia Neal feels a bit miscast, although she gives it her best effort.

But there’s otherwise not a lot here. The plot is pretty thin for a movie that runs 102 minutes or so, and while what we’re given is interesting for the most part (again, it’s a lot tougher in the middle), it seems a bit longer than it needs to be.

It’s worth saying that Blossom only ever says his name. It would be easy, especially for a 1949 film to take the black, non-English speaking character and make him either a stooge or pure comic relief. That does not happen here. Actor Orlando Martins appears to be treated with dignity, and the character is never ridiculed for not speaking English. In fact, that he speaks even a word of it and is obviously fluent in another language is offered as a point to demonstrate the film’s position. Blossom is treated not much in the film, but when he’s there, he’s given some dignity.

This is good. It’s fine. It’s not great, and I can’t imagine watching it a second time.

Why to watch The Hasty Heart: It manages to be a war movie without any war.
Why not to watch: It jumps on the one nerve I have when it comes to medical dramas.