Films: Romeo and Juliet (1936)
Format: DVD from NetFlix on laptop. 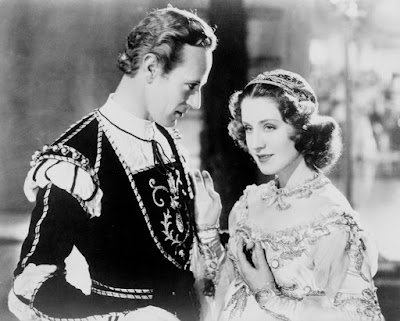 Strap in, folks; it’s going to be one of those reviews again. I knew that as soon the disc showed up in the mail today. The 1936 version of Romeo and Juliet wasn’t at the top of my queue, but it was close to the top, and that meant there was a decent chance that it would be the one that showed up. And, well, here we are. I knew I’d have to get to it sooner or later and I suppose at this point I’ve put it off about as long as I could.

So why my reticence? This had a couple of things going against it right from the start. First, it’s Romeo and Juliet, perhaps my least favorite of Shakespeare’s well-known plays. Oh, sure, I enjoyed it well enough when it was done with zombies as Warm Bodies, but generally speaking, it’s not a story I like. Even West Side Story and its glorious color and choreography are merely a beautifully-realized version of a story I dislike. The second hurdle is nearly as big: Leslie Howard. I’ve liked Leslie Howard exactly once (Pygmalion), and tolerated him a couple of times. Otherwise, I find him to be about as interesting as dry toast.

Anyway, you know this story so I’m not going to get too involved here. In Verona, the Montagues and the Capulets hate each other for some reason. I don’t know if it’s every expressly said why the feud exists. Perhaps both families are just too rich and need a hobby or something. Anyway, everyone associated with one family hates everyone associated with the other. It’s like House Atreides and House Harkonnen.

Romeo Montague (Leslie Howard) is despondent over a woman and is dragged incognito to a Capulet party. It is there that he first sets eyes on Juliet Capulet (Norma Shearer), and the two are immediately gaga for each other. They meet up and get married without anyone knowing about it. Of course, there’s still bad blood between the families, and Juliet’s cousin Tybalt (Basil Rathbone, who was nominated in a supporting role) tries to pick a fight with Romeo. Instead, Romeo’s buddy Mercutio (John Barrymore) gets in the fight and dies, and then Romeo kills Tybalt. Because this has been going on too damn much, Romeo is banished from Verona. But, eventually, he’s going to hook back up with his girl. Because there are miscommunications and no one in the play has an ounce of patience, pretty much everyone we are supposed to care about ends up dead.

One of the inherent problems with Romeo and Juliet in general is that it’s virtually impossible to find anyone who is both the appropriate age for the title characters and who has the acting chops to pull it off. As written, Romeo is supposed to be about 17 and Juliet is 13. The decently-received Baz Luhrmann version had a 17-year-old Claire Danes and 22-year-old Leonardo DiCaprio, which is kinda close. This is essentially the ages of Hailee Steinfeld (17) and Douglas Booth (21) in their 2013 version. Zeffirelli’s version was very close, with an 18-year-old Leonard Whiting and a 17-year-old Olivia Hussey—and they were far from the selling point of that version. For this version, we’ve got a 34-year-old Norma Shearer and a 43-year-old Leslie Howard. It boggles the mind. I mean, I like Norma Shearer just fine, but there’s not even the pretense of thinking that we’re accurate with the ages of the characters here.

Beyond that, there are some odd casting choices, like Andy Devine in the role of Peter, a servant of the Capulets. Peter is likely a clown character, intended as at least mild comic relief, but Andy Devine and that high-pitched, fluctuating voice? That seems beyond the pale.

The truth is that this may well be a much better version of this film than I am willing to admit or even capable of noticing. I tend to be put to sleep by Leslie Howard, and I dislike this story immensely. There’s no getting around that, and with the best will in the world, this was never going to be a movie I liked. There’s some clownish overacting (Tybalt’s death is particularly glorious and a camp sort of way) and Leslie Howard remains bland and the complete opposite of someone capable of igniting the fires in someone as capable as Norma Shearer.

So, I’d say watch at your own risk, with the strong caveat that I’m not an unbiased judge here, and my take is likely to be harsher than may be accurate.

Why to watch Romeo and Juliet (1936): It’s Shakespeare.
Why not to watch: A 13-year-old and a 17-year-old have a three-day romance that ends with six people dead.