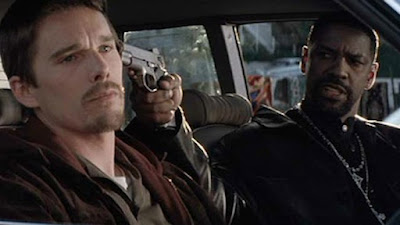 One of the greatest television shows ever made was Chapelle’s Show, and one of the greatest episodes of Chapelle’s Show was the one involving Wayne Brady. I didn’t realize until tonight that at least a part of that sequence is a direct reference to Training Day. This movie has been sitting in my collection for a long time. One of the truths of pursuing a giant list like I have been is that it’s easy to overlook watching a film I own because I know I can always watch it. It’s the ones where my access is potentially limited that often take precedence. Still, eventually you’ve got to get to all of ‘em, and Training Day wasn’t going to watch itself.

Training Day gives us a young cop named Jake Hoyt (Ethan Hawke, nominated in a supporting role) attempting to join the narcotics squad. He’s going to be put to the test by highly-decorated narcotics officer Alonzo Harris (Denzel Washington). While Harris is highly decorated, he’s also known to be extremely dirty, and that’s going to be perhaps the biggest test for young Jake. As his day goes on, Jake is going to find himself forced to take narcotics—specifically PCP-laced marijuana, have guns pointed at him multiple times, get into a few fights, come close to death multiple times, and be involved in a variety of illegal activities.

And honestly, that’s the one real issue I have with Training Day. There has not been a more jam-packed day of activities in a film since Rebel without a Cause. It’s one of those realizations that makes the film a little too much to believe. Poor Jake gets stoned out of his mind, meets a former cop-turned dealer, stops a rape, bust a dealer, raid another dealer’s home, meet up with Alonzo’s mistress and child, meet up with three prominent (and likely dirty) cops, bust and murder a dealer, steal all of his money, and concoct a plan to cover their exploits. And he gets almost killed by yet another group of criminals and eventually forces a showdown with Alonzo. Seriously, this is a month’s worth of police work crammed into about 16 hours.

Along the way, I will say that we get some fine cameos. Scott Glenn shows up as the cop-turned-dealer, Eva Mendes as Alonzo’s mistress, and the always-versatile and underknown Cliff Curtis as a thug in the pay of Alonzo. We’ll get some rappers and musicians here, too—Dr. Dre and Snoop Dogg show up as dealers and Macy Gray as the wife of a dealer. Terry Crews has a non-speaking and uncredited role as a Blood. That-guy Harris Yulin and Tom Berenger have small roles as prominent cops. It’s a nice and varied cast list, and one that is impressive for a lot of reasons.

Training Day does call up some points that need to be addressed about the nomination process at the Oscars, though. Denzel Washington is clearly the “name” actor on this film and there’s no dispute that he’s an actor in a leading role. But Ethan Hawke is probably in more minutes of the film—certainly about the same amount at least, but is somehow considered supporting? It’s one of those cases of odd category fraud, at least on the surface, and I’m not really sure how to address it. It’s strange, though, because while Ethan Hawke’s Jake is in many ways the central figure of the film, he is easily and clearly overwhelmed by the force of personality of Alonzo Harris.

And really, this is what Training Day is all about. We can talk about the idea of corrupt cops and precisely where the line is and should be about what cops can do in the pursuit of their job, but Training Day is not a serious treatise on police corruption or even the extent to which the police should be allowed to break the law. It’s about watching Denzel Washington turn in the sort of performance that he seems made for. Washington is one of those unique actors who is equally interesting as a good guy and as a bad guy. In fact, he might honestly be more compelling as someone with serious character flaws (like Philadelphia). He’s even more compelling in a film like this one where the flaws are obvious and where he is either unaware of them or unwilling to deal with them. Films like American Gangster, Flight, and Fences come to mind as well.

So, while it does feel a little bit like category fraud, this is so much Washington’s film. He is front and center and both great and terrible, magnetic and awful at the same time. He is a beautiful train wreck of crime, destruction, and hubris, and as the film goes on, we slowly start to piece together exactly what is going on in the world of Alonzo Harris and why this might be the case. And while he is a miserable bastard through and through, he’s never not interesting on film.

I honestly don’t know if I like Training Day that much. I do like a lot of the performances here, though, in particular Denzel Washington’s braggadocio and Ethan Hawke’s more emotionally shocked and google-eyed terror. There’s a lot to respect here in general, even if the story being told ultimately doesn’t make a lot of coherent sense. I can’t imagine all of this happening in a single day—it seems like there’s just too many events for a 72-hour period let alone 16 or so hours. Still, it is mighty intense, and that gives it some of its power as well.

Why to watch Training Day: Monster performances from Denzel Washington and Ethan Hawke.
Why not to watch: It’s a bit much to believe this is a single day.