Off Script: The Thing from Another World

Film: The Thing from Another World
Format: Turner Classic Movies on rockin’ flatscreen. 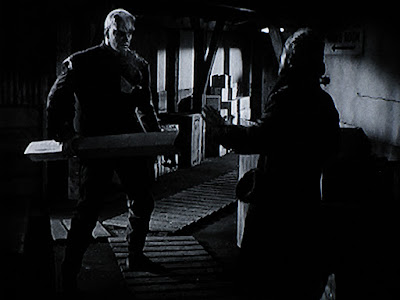 I have a huge soft spot for science fiction from the 1950s. There’s something wonderfully naïve and goofy about it, a charm that really doesn’t exist in any other combination of time and genre in film history. Science fiction from these years contain the promise of galactic exploration and the danger of alien civilizations, often tinged with hints of Cold War politics. There’s nothing quite like them. When The Thing from Another World popped up on TCM, I jumped at the chance to record it and rewatch it.

The biggest issue with The Thing from Another World is something that isn’t its fault. The film was reimagined in 1982 by John Carpenter, and Carpenter’s version is just about perfect. Unless you’re already a fan, it’s hard to get really excited about a version of the story that isn’t as good as the one you’ve already seen. Still, it’s sometimes nice to see where it comes from, and in this case, The Thing from Another World paved some ground that Carpenter later used to his own great advantage.

When I say that Carpenter reimagined this story, I mean that he took a few basics and changed it completely. Fans of The Thing will find a lot here that is substantially different. We start in Anchorage and meet a couple of our intrepid heroes who will be soon moving on to the Arctic. A military team is dispatched from Anchorage to head north; a science crew has found evidence of an unknown craft that has crashed into the ice. Among those heading up are Captain Hendry (Kenneth Tobey) and reporter Ned Scott (Douglas Spencer).

The title gives away what they find, of course. The unknown craft is a flying saucer. The team attempts to melt the craft out of the ice in which it is embedded, but the thermite charges catch the craft on fire, destroying it. However, they also find a body frozen in the ice. The body is hacked out of the ice and brought back to camp, which is where all the fun begins.

Since this is a movie from the ‘50s, there has to be love interest. She shows up in the form of Nikki Nicholson (Margaret Sheridan), who acts as the secretary of Dr. Carrington (Robert Cornthwaite) and who has a past with our Captain Hendry. Cornthwaite is a classic science fiction scientist, interested in the find and not so interested in his own safety or the safety of those people around him. Because, of course, the creature (played by James Arness) comes to life. It’s soon revealed that the creature heals itself through blood, which means that now everyone is in danger. That’s to be expected, and we’ll have a couple of drained bodies of both humans and sled dogs before we get to the end.

The Thing from Another World does have that little touch of Cold War paranoia to it. The creature is man-shaped, but completely alien, driven by its own evident desire to conquer (or at least survive) and implacable as a foe. It doesn’t come with the shapechanging characteristics of its eventual remake. In fact, we find out part way through that this creature is actually a form of very sophisticated plant life.

The most spectacular moment of the film comes when the men have decided to fight back as best they can by arranging a trap for the creature, dousing it with kerosene, and lighting it on fire. It’s a great effect, and I can only imagine that in 1951, it scared the wet blueberries out of the audience. It still holds up. The rest of the effects really don’t. The creature itself just looks like a guy in a rubber monster suit, which it naturally was.

Like I said above, it’s kind of a hard sell if you have already seen Carpenter’s version of the story. There is something really charming about this original version, though. It’s almost sweet with how naïve it comes off. Sure, there’s danger here, but it feels like the sort of danger that doesn’t really go beyond the characters who are at danger at the moment. There’s no real world domination going on here—just a monster who has some people trapped near the north pole. The characters are two-dimensional at best, and that’s okay. We don’t need to know much about them beyond them being in danger and mainly military.

Is it good? It kind of is. It’s not great, but the reason it isn’t is not the fault of the film. If you like the genre and the era, it’s a must-see. Otherwise, it’s still fun and worthwhile, but hardly required viewing.

Why to watch The Thing from Another World: Sci-fi from the ‘50s is awesome.
Why not to watch: This is one of those weird cases where the remake is worlds better than the original.