Off Script: The Satanic Rites of Dracula 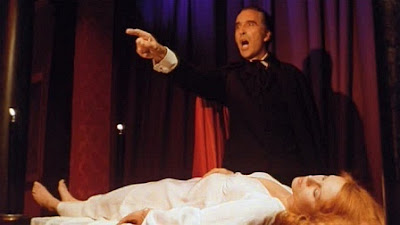 Christmas money is a wonderful thing. Give me a $50 gift card and a used DVD store and I’m a happy man. I’m even happier when I locate a two-disc set of something like The Satanic Rites of Dracula for a good price (I got And Now the Screaming Starts! and a few others, too). I’m of the opinion that you can’t have enough Hammer horror, Peter Cushing, or Christopher Lee in one’s personal collection, so I snapped it up.

I can’t say I’m having buyer’s remorse, but it is certainly one of the oddest films in my collection. Yes, it’s a vampire film as the name would suggest, but this is not one of those Hammer films that tries to get all gothic on things. It takes place in the time it was filmed, so it’s a modern Dracula with modern henchmen and modern detectives working a case. Oh, there are certainly some acknowledgments of the source material beyond Dracula being the main foil and being played by Christopher Lee. After all, you can’t have a Dracula film starring Lee without putting Peter Cushing on the cast list as Van Helsing, can you?

We start with the satanic rite of the title. This involves a woman named Chin Yang (Barbara Yu Ling) leading the ceremony involving a nude woman, some hooded figures, a knife, and a doomed chicken. A secret service agent manages to see the ceremony and also has gotten pictures of the people involved. He’s severely beaten by the cultists and tells his story to the police, claiming five people, but he has pictures of just four of them. Then the cop dies.

Murray (Michael Coles), one of the cops, decides that the person to bring in on the case is occult expert Lorrimar Van Helsing. Van Helsing and his granddaughter Jessica (Joanna Lumley) are brought in and know quite a bit about the rites that we saw at the start. What’s very interesting is that all the people photographed are prominent members of society—religion, government, and the like. And the cult kidnaps the secretary for the secret service.

So where is all of this leading? Based on the title of the film, it’s no shock that the cult is headed by Dracula himself, or that our kidnapped secretary is soon turned into a vampire. That’s standard vampire movie stuff. Where it’s not standard stuff is when Van Helsing is forced to admit that he knows Julian Keeley (Freddie Jones), one of the cultists. Van Helsing pays him a visit and finds that Keeley is a) mentally unhinged and b) has created a new, virulent strain of bubonic plague.

How does all of this come together? Clumsily. Van Helsing’s theory is that Dracula wants to kill off the entire planet, which will clearly kill him eventually, because he’s tired of dying and returning over and over. Of course all of this means that Van Helsing and Murray are going to be captured by the cult and it also means that Jessica will be captured as well and will naturally be the intended victim of Dracula before the plague goes live.

I’ll say this for The Satanic Rites of Dracula: it’s ambitious. It doesn’t make a great deal of sense and the entire “killing off the world” plot line seems ridiculous as well. It seems like a way for Hammer to put together one last crazy Dracula film to send the series off into the history books with a bizarre send off.

It’s hard for me to not like The Satanic Rites of Dracula at least a little bit because of its place in history. This is the last time that Lee and Cushing played these roles in the same film and faced off against each other. That makes it special even if it doesn’t make any damn sense. This isn’t the classic Hammer horror stuff and it shows. The frequent nudity, some of which doesn’t mean anything other than being nudity, for instance, is just there because this no longer had the cache of these films from several decades before.

The movie runs through its 87 minutes and ends pretty much how we expect it’s going to. Dracula doesn’t tend to survive moves that have his name on them. It may simply be that just about every other plot involve Dracula was tried at this point and there was no other place to take this than to have Dracula try to destroy the world. It’s all so damn silly.

But I’ll say it again; it’s hard not to like it at least a little bit.

Why to watch The Satanic Rites of Dracula: The final Hammer team-up of Christopher Lee and Peter Cushing.
Why not to watch: None of it makes a damn bit of sense.