Film: The Rose
Format: DVD from NetFlix on laptop. 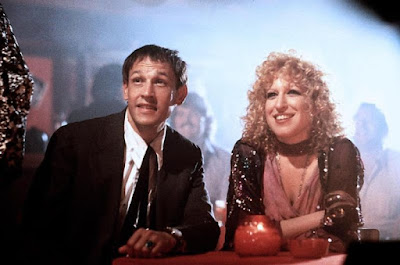 There are a few important things I need to say before I delve too far into The Rose. The first is that I am an unabashed fan of Bette Midler as a human being; I think she’s aces. The second is that I’m not a huge fan of Bette Midler as a performer. Her style on stage as a singer doesn’t do a lot for me. Third, since that this is more or less an unofficial biopic of Janis Joplin, I should come clean on the fact that I genuinely dislike Janis Joplin as a singer. This means there are going to be some pain points for me here—we’ve got someone I don’t love as a performer acting as someone I don’t like as a performer, and she performs a lot.

So, yeah, this is an unofficial Janis Joplin biopic, which is clear pretty quickly. In fact, the only reason it’s not an official biopic is that Joplin’s family wouldn’t allow it. This is how the name of this movie went from Pearl to The Rose in the first place. And, unlike a true biopic, The Rose covers a very short period of time, a period that is awash in bad behavior, drugs, and alcohol.

And, well, that’s the movie. Bette Midler. Is. Mary Rose Foster, a rock diva known everywhere as The Rose. She is wildly successful and popular, but is also completely at the end of her rope. The only reason she appears to still be on her feet is because of a combination of booze and pure will. What she wants is a break, but her manager Rudge Campbell (Alan Bates) refuses to let her go; she makes him too much money. Strung out and desperate and mortified by a country singer (Harry Dean Stanton) whose songs she performs, Rose runs off with Huston Dyer (Frederc Forrest), a limousine driver. For Rudge, Huston is just another guy there to serve Rose sexually, but she finds something special in the driver.

The relationship is naturally rocky, and most of the problems come from Rose herself. While Huston claims to be AWOL from the Army, it is Rose who seems to take other lovers in front of him, even grabbing another soldier, Mal (David Keith), to act as her security escort. Through all of this Rose maintains that after she plays a concert in her home town, she will take a year off, a year that she plans to spend with Huston.

The first two acts of the film, roughly the first 90 minutes or so, are there to set up the third act. Sure, that’s kind of always true, but there isn’t really a great deal of building of tension or narrative here. The first 90 minutes are really just Rose being out of control and everyone else in her life doing what they can to rein her in. The implication is that Rudge is far more interested in her earning potential while Huston is more concerned for her, and is also the only person in the narrative willing to walk away from her if that needs to be the case.

When we get back to Jacksonville, Florida, where Rose is from (rather than Port Arthur, Texas), everything spirals completely out of control. Rose can’t keep anything together. Everything seems to fall apart for her at the same time, including some revelation of her sexual past that comes at an inopportune time. We also get moments of Rose falling back into a cycle of drug use here, with both barbiturates and heroin playing a role in this.

Here’s the thing about The Rose: I hate the character and I’ve never been a fan of Janis Joplin either as a singer or as a personality. For all of that, Bette Midler is astonishing here. For the life of me, it does not look like she is acting, but simply existing in this role. There is a rawness to her as well as a raw, almost uncomfortable sexuality. Midler circa 1979 is not an especially attractive woman, but she has a sexual magnetism/charisma that is almost pure an undeniable. This was almost certainly at least mildly shocking in 1979 (and might still be today for some people). Midler simply accepts it and accepts all of the damage of the role along with all of the talent of the character. It’s mesmerizing. I said at the top that while I don’t love Midler as a performer, I love her as a person, and so much of that shines through here.

It’s also worth saying that Frederic Forrest had a hell of a 1979. He was Oscar nominated in a supporting role for this and was also a major player in Apocalypse Now. While Forrest is generally overshadowed by Midler in every scene, that’s more or less true of everyone, and Forrest is excellent in his role.

My problem with The Rose is that there is simply far too much performance. I get why that’s here. There were certainly people who went to see this specifically because of Bette Midler in the title role, and who were there to see her perform. I think a lot of it can be cut. We don’t really need full song performances at every turn, and we get a lot of that. We’d lose nothing of the story here with 15 minutes fewer of the stage work.

So, I don’t love The Rose, but I respect the hell out of it, and love Bette Midler all the more because of it.

Why to watch The Rose: Bette Midler is a goddam queen diva.
Why not to watch: If you’re not a fan of the music style, there’s a lot here that will be trouble.

Posted by SJHoneywell at 4:35 PM