Off Script: Dracula: Prince of Darkness 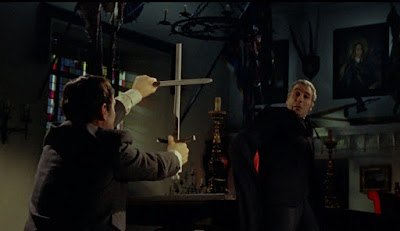 Particular monsters are in vogue at particular times. Vampires come and go. They shifted pretty significantly a couple of decades ago. There was always something vaguely tragic and romantic about them, but it wasn’t until Interview with the Vampire that they became particularly effeminate. You can insert your own sparkly vampire joke here. I greatly prefer more feral vampires, and while there are plenty of examples of animalistic vampires, I don’t know that the Count was ever played better than by Christopher Lee, who donned the cape seven times. Dracula: Prince of Darkness was his second film in the role, and one that is sadly missing the great Peter Cushing. Ah, well…

The film starts with a recap of Horror of Dracula, Lee’s previous film in the role. We get a refresher on the death of Dracula (Lee) and the end to his century-long reign of terror. The film then picks up ten years after the previous movie, introducing us to Father Sandor (Andrew Keir), who shows up at the burial of a young woman who, because of superstition, was about to be buried as a vampire. He stops this, and then steps into a local inn where he meets a quartet of travelers. These are the Kents, two married couples. Alan (Charles Tingwell) and wife Helen (Barbara Shelley) are the more fussbudget=y couple, while Charles (Francis Matthews) and his wife Diana (Suzan Farmer) are younger and seem quite a bit more willing to have a little fun.

The Kents are in the area vacationing—doing some climbing and sightseeing. They have plans to visit Karlsbad, a place that Sandor implores they avoid. But they’re going anyway, so he tells them instead to avoid the castle there, one that is not on any of the maps. So, of course they head off to Karlsbad and their carriage driver abandons them in the shadow of the unmapped castle. As he leaves, a driverless carriage arrives, and the four go to the castle they’ve been warned against despite Helen’s intense misgivings. Once there, they meet Klove (Philip Latham), how puts them up in rooms and fixes them dinner, telling them that his master, the late Count Dracula, has always implored him to keep the house ready for guests.

So here’s how this is going to work. Alan Kent goes wandering on their first night in the castle only to be murdered by Klove. Klove then strings up his body over the ashes of Count Dracula and bleeds him like a steer. When the blood drips onto the ashes, Dracula is regenerated, and he immediately bites Helen and turns her into a vampire. The rest of the film consists of Dracula and/or Helen attempting to add Diana to their family while Charles and Father Sandor attempt to save her from the Count’s undead clutches.

There are a number of very interesting choices in Dracula: Prince of Darkness. The main one is that Christopher Lee never speaks. He makes a few noises at the end of the film, but the man utters not a word. There are various stories behind this. One is that the screenwriter claims that he didn’t write any dialogue for Lee. Another is that Lee, seeing the dialogue that was written for him, opted not to say anything instead. In either case, it’s an interesting choice to have a title character who doesn’t speak, and yet it also manages to hearken back to Horror of Dracula, where Lee doesn’t speak for the second half of the film.

The biggest problem with films like Dracula: Prince of Darkness is that there isn’t a great deal of surprise where it’s going to go. We know almost as soon as the movie starts that there are a few things that will happen before the end. We know Dracula is going to come back. It’s a fair guess that a few of the Kents are going to be vampirized, and since Barbara Shelley was a noted scream queen, she’s the clear choice. We also know that, because of both convention and requirement, no monster could survive the end of the film. The only question is how Dracula is going to be rubbed out.

Still, it’s hard to not love Christopher Lee. He’s so menacing that it doesn’t even matter the he never speaks. The man was tremendous in this role, and there’s not really another reason that’s needed to spend time with the film. It’s not a perfect film, and might not even really be a good one, but it’s a hell of a lot of fun.

Why to watch Dracula: Prince of Darkness: Christopher Lee makes an awesome Count.
Why not to watch: It pretty much goes where you think it’s going to go.