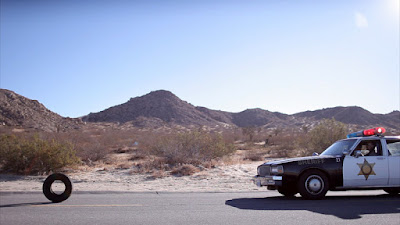 I have no idea where to begin when discussing Rubber. I’m going to do my best to describe what this is in the next several paragraphs or so, and I’ll have it make as much sense as I possibly can. I have no confidence that I will be able to do this, so bizarre is our narrative.

Rubber is a movie within a movie. Kind of. There is an audience within the diegetic landscape of the movie, but they aren’t watching a traditional movie. Instead, they are out in the middle of nowhere watching a story unfold in the distance, using binoculars to see what is happening. So, while they are referring to what they are watching as a film, it’s more like a series of events happening in the distance, since the people watching aren’t in any sense watching events on a screen.

The “film” they are watching is about a sentient car tire. I’m going to say that again and give you a chance to get your brain around it. The film that takes place inside Rubber is about a sentient car tire named Robert that can psychokinetically cause people’s heads to explode. My thinking is that the main reason that this is a film that takes place inside another film is that, try as they might, the filmmakers can’t get anything like a feature length story out of a psychokinetic, sentient car tire.

Rubber, by design, is incredibly short, running just a skoch past 80 minutes, a running time that includes a relatively ample credit sequence. While the film opens with a short monologue on the idea of “no reason,” there does appear to be a point to all of this somewhere. Are we dealing with the idea of narrative? Voyeurism? Testing the patience of an audience? An exploration into the idea of a meta-narrative?

The truth is that I have no idea, because even the idea that there are people standing around in the desert watching a “movie” play out in the distance doesn’t make any sense. This collection of people (which includes veteran actor Wings Hauser as a man in a wheelchair) don’t seem to have any connection to anything like reality. It’s not like they seem to have a way to get out of the desert—they spend the night there without food.

And that’s not all. The audience in the movie might well be the main focus of the movie, since they soon start dying, having been poisoned by the food provided to them. So they were brought into the desert to watch something that doesn’t make sense and then get killed? It’s like Cube without the Cube. And it gets more and more meta, because the people who seem to be a part of the plan to kill off the audience also appear in the movie, following the path of the destructive psychokinetic tire, “investigating” the murders.

Look, I make it a point to write what I think is a full set of thoughts about every film that I watch here. I’ve written 700+ words on films that run about 10 minutes or so. But with Rubber, I seriously don’t have any idea of what it is or what I’m supposed to think about it. In fact, it’s taken me more than a week to sit down and write this because I had no idea what I wanted to say about it, what it meant, or what I was supposed to think. It’s nonsense, and it’s nonsense that masquerades as something else.

And so I am of a couple of minds here. I think it’s entirely possible that this is just something that some people thought up while bombed out of their minds on mescaline. The people who love this movie are the type who love it ironically—appreciating it because there really isn’t anything here. It’s edgelord bullshit that it’s cool to like because other people don’t get it. I mean, there’s nothing to get here, but if you pretend to understand it, you get those edgelord props, right?

On the other hand, it’s entirely possible that Rubber was made as a spoof of the sort of arthouse bullshit cinema that people who think too highly of their own intellect get excited about. If that’s the case, Rubber is goddam brilliant.

Why to watch Rubber: Nothing is more meta.
Why not to watch: There is no reason that it exists.