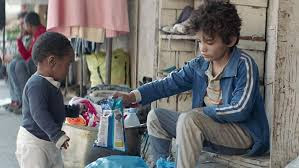 I’m honestly not sure where to start with Capernaum. The List frequently adds a couple of non-English movies every year. Generally speaking, that’s whatever wins Best Foreign Language Feature at the Oscars and another one. Given a guess, I would have suggested Cold War, nominated both for Foreign Language Feature and Best Director. Instead, we’ve got Capernaum, the Lebanese entry for Best Foreign Language film, and one that cannot be summarized easily. A first attempt would be to say this is the story of a young boy who sues his parents for the crime of birthing him. But that doesn’t do the story justice.

Zain (Zain Al Rafeea) is 12-years-old and in prison for stabbing someone. He’s also, as the previous paragraph mentioned, suing his parents Souad and Selim (Kawthar Al Haddad and Fadi Kamel Youssef) for having him. More specifically, the case isn’t just that they had him, but that he has no papers, and thus no identity. His parents have many children, but have failed to take care of any of them, and have essentially abandoned him and his sister Sahar (Cedra Izam). A substantial amount of the story, then is understanding how we got here.

Zain and Sahar don’t go to school. Instead, they and their younger siblings do what they can to supply money to their parents to keep the family alive. The big money maker is finding ways to get prescriptions for pain killers. These are then crushed up and dissolved in water. Clothing is then soaked into the water, dried, and taken to the nearby prison where the pain killers can be extracted. Zain also works for Assad (Nour el Husseini), the family’s landlord. One day, it becomes evident that Sahar is menstruating for the first time. Knowing that this will almost certainly cause her parents to marry her off, Zain makes plans to keep that fact a secret and run away with Sahar. It doesn’t work, though, and Sahar is soon married off to Assad despite being only 11 years old.

Zain runs away anyway and meets Rahil (Yordanos Shiferaw), an undocumented Ethiopian woman. Zain attaches himself to her and lives with her, taking care of her young son Yonas (Boluwatife Treasure Bankole). Eventually, Rahil’s forged papers run out, and unable to get new ones, she is picked up by authorities, leaving Zain alone without word to care for her infant. After a few days, Zain returns home to his parents to discover what has happened to Sahar and the rest of his family, and to eventually wind up in juvenile prison.

Surprisingly, in many ways Capernaum is not about the brutality of the human condition, although it absolutely could be. In a very small way, it is about hope. It is about fighting back against the darkness. While it could easily slide into nihilism and depression, it’s about the fight against that, even if the fight is an ultimately futile one, or is likely to be.

The 1001 Movies list has a lot of issues with it. While it is very much a celebration of film, there are a lot of movies on it that could be overlooked or ignored, that aren’t truly must-see before you die. There are a lot of gaps on the list, places where the listmakers have decided we don’t really need to go. The recent additions of The Greatest Showman and the latest A Star is Born are examples of the former; the continued lack of anything Ray Harryhausen ever touched is a clear example of the latter. But the List is getting better in certain ways. Films like Capernaum are worthy additions not simply because they are well made (I still haven’t seen Roma or Cold War, but this had to be serious competition), but because of the stories they tell. For all that Capernaum could be terribly depressing, it is ultimately hopeful. That’s not merely the power of the film, but the power of the message offered by writer/director Nadine Labaki.

The List is improved by more voices of women, and more voices of women from cultures where they are traditionally silenced. When the message that we get from them is one not just of struggle for survival but the potential victory over that struggle, or at least the chance to fight it to a standstill, the world is a better place as well. This could be jaded and nihilistic, and it’s not. That, more than anything, makes it worth seeing.

Why to watch Capernaum: Because there’s still hope in the middle of the worst things.
Why not to watch: You need a reason to want to watch the world burn.