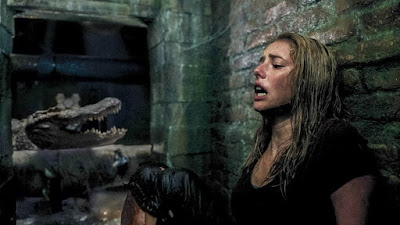 There will probably always be a place for the basic monster movie. That’s all Crawl really is. It’s just Man vs. Nature (or Woman vs. Nature in this case) laid over the top of a disaster movie. It’s Hard Rain meets The Meg, more or less. We’ve got a couple of people trapped in a crawlspace with alligators during a category-5 hurricane in Florida. That’s it, and it doesn’t pretend to be anything more.

I could honestly stop there with a plot summary, but if I go a little further, it allows me to introduce the cast. Haley (Kaya Scoldelario) is a student at the University of Florida desperate to maintain her position on the university swim team to keep her scholarship. While struggling at the moment, she learns that the area will soon be severely attacked by the latest hurricane that has shifted and is now headed directly for her. Advised to get out of the state, she instead heads south to find her father, Dave (Barry Pepper), who is not answering his phone. When she arrives at his condo, she discovers he’s not their either, but his dog Sugar still is.

Concerned for his safety with the storm now coming in more and more, she heads to the old family home in Coral Lake, which he supposedly sold in the past. Naturally, she finds his truck there, and after a little searching, she finds him badly wounded in the crawlspace beneath the house. Shortly thereafter, she discovers the reason for his wounds—there are gators in the crawlspace, and the water is rising.

That’s really it. We’re going to get some body count from looters at the gas station across the street and some investigating cops, but it’s really just Haley and her dad trying to get out of the crawlspace despite their being separated from the exit by large, scaly predators. They’ll try a variety of tactics to outsmart the lizards and make it to safety while the hurricane crashes around them, floods the crawlspace, and destroys the house over their heads.

Crawl does a few things really well and a few things really poorly. For a change of pace, I’ll start with the problems. In truth, the multiple problems are just aspects of one very big problem: the characters are often really dumb. At one point, Haley realizes that she has dropped her phone. She and Dave are in a part of the crawlspace that is essentially blocked off from the gators by pipes. They’re safe if they stay there, at least for the time being. Haley decides that they need the phone. “Okay,” I hear you say. “What’s so dumb about that?”

Sure, there’s a part of me that understand the desire to retrieve the phone. The phone means you can call for help and maybe someone can come rescue you. But we’re talking about making cellphone calls during a category-5 hurricane. I’m guessing that the cellphone towers are probably down and there’s nobody answering the phone in the first place. Her hunt for the phone and the moments of scaly pursuit happen because the film needs Haley and Dave to be separated to increase the tension. This was the best idea to get the separated. It’s a plot decision to make the characters act in a dumb way rather than giving us a legitimate character-based decision to reach the same end.

But that’s small potatoes, really. It’s a big enough problem that I did think of it while watching the film, but not such a big problem that it pulled me entirely out of the movie. Everything else that Crawl does, it does pretty well. It’s smart enough to keep the running time short. It’s a spare 88 minutes, with a substantial chunk taken up by end credits. There’s not a great deal of downtime in the movie. After maybe a ten minute introduction to establish the characters (and to reinforce the idea that Haley is a strong swimmer), we’re right into the jaws of the alligators for the rest of the running time. It’s pretty relentless once it gets going.

If there is a thing that really stops me from recommending it fully, it’s that you’ve probably seen this before. There’s not a great deal in Crawl that you haven’t seen in something like Deep Blue Sea or Piranha or Open Water or…

Why to watch Crawl: It’s a straightforward creature feature like the good ol’ days.
Why not to watch: There’s not a damn thing new here.